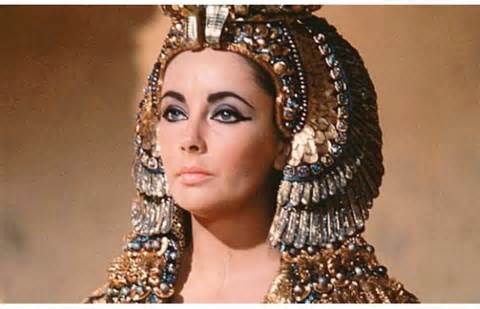 The Royal Diaries by Kathryn Lasky (tween and teens) are a series of diaries of many of these greats.

Book finds from Rome and Egypt

Among women rulers the first one that comes to mind is Cleopatra VII, the last Pharaoh of ancient Egypt, who ruled for 21 years (51-30 BCE), and about whom Shakespeare has famously said, ‘Age cannot wither her, nor custom stale her infinite variety,’ in his Antony and Cleopatra.

A few books that spring to mind are H. Rider Haggard’s Cleopatra, written as an adventure, Colleen McCullough’s Antony and Cleopatra and an award winning biography by Stacy Schiff.

Then there is George Bernard Shaw’s Caesar and Cleopatra, immortalised on screen with Vivian Leigh as Cleopatra. Legends about Cleopatra speak of her great beauty that seduced the greats of Rome; she is supposed to have smuggled herself into Julius Caesar’s rooms rolled up in a carpet – a scene included in Elizabeth Taylor’s Cleopatra.

A millennium and half before her came Hatshepsut and Nefertiti, at the height of Egyptian glory. I picked up His Majesty, Queen Hatshepsut, a Young Adult book on this 18th dynasty Pharaoh after reading in the papers that her mummy was found recently. A 14 year old Hatshepsut, daughter of Pharaoh Thutmose I, becomes a wife and queen, and after her husband’s early death, becomes the Pharaoh herself and rules against all odds – she reigned for 22 years (1478-51 BCE), and preferred to be called King rather than Queen.

While searching for more books, I found an interesting titbit – that there was a Sphinx of Hatshepsut (sphinxes were only made for ruling Pharaohs). Other books that would be interesting – Child of the Morning, that shows Hatshepsut to be a strong-willed, passionate woman, as well as an able ruler. Also, The She-King series of books which begin with the life of Ahmose, Hatshepsut’s mother, and Hatsheput: The Female Pharaoh which is a brilliantly written biography.

Nefertiti, the beautiful queen of Akhenaten, was co-regent for 14 years (1345-31 BCE), ruling along with her husband. He was the only Egyptian Pharaoh to promote monotheism – worshipping the sun god, Aten. In Michelle Moran’s book Nefertiti, it is hoped that this wondrous beauty, as the Great Royal Wife, would be able to knock some sense into the young, slightly ‘unstable’ Pharaoh, who has strange ideas about there being just one God in polytheist Egypt.

The Twentieth Wife and A Feast of Roses by Indu Sundaresan tell the story of Mehrunnissa, daughter of a Persian aristocrat, who first meets the Prince Salim as a child, and vows to marry him. Life comes full circle, when he meets her again as a 26 year old widow with a child, and marries her, naming her Nur Jahan. A vividly and lyrically written book, the Mughal era with all its court and harem intrigue is brought to life by the author.

Another book I would recommend is Nur Jahan’s Daughter by Tanushree Podder. This is Nur Jahan’s story first as a doting mother, then as the ambitious queen, and of the simple, loyal and courageous daughter Ladli Begum who pays the price for her mother’s ambitions.

Shadow Princess, again by Sundaresan, is Jahanara’s story – she is only 17, when the responsibility of the empire falls on her. As a Mughal princess, she is barred from marrying, to keep the throne safe from outsiders. The book speaks eloquently of her lonely existence, even while powerful.

Like her grand-aunt Nur Jahan, (Mumtaz Mahal was her niece), she was an intelligent and learned lady, a Sufi scholar, and was the voice of moderation even during her brother Aurangzeb’s rule later, the only person to whom he paid any heed. A couple of other books on this tragic princess who did much for her people are Mistress of the Throne and Beneath a Marble Sky.

Jijabai was the mother of the great Maratha king, Shivaji, and the inspiration for his quest to create an independent Maratha kingdom. There is no book that I know that has her story exclusively, but then, Shivaji’s story could be considered her story – and the book Shivaji the Great, a translation of the Marathi Shriman Yogi by Ranjit Desai is a wonderful read.

It begins with a much pregnant Jijabai, queen of Shahajirao Bhosale, taking asylum at Shivneri fort while her husband is chased by his enemies. She rues the fact that he works for the Nizam, and brings up her son to fulfil her dream – Shivaji was crowned the king just 12 days before she passed away. At the height of its glory, the Maratha kingdom covered much of the subcontinent.

Stories of the Queens

Rani by Jaishree Misra is the tale of Rani Lakshmi Bai of Jhansi, that treats her persona not just as a Queen who stood up against the British for their inequities during the 1857 uprising, but also as a woman with hopes and wishes of her own. Another well researched book that shows the human side of the queen as well as her official persona, is Mahashweta Devi’s The Queen of Jhansi. Rani Lakshmibai by Deepa Agarwal is a lucidly written biography that can introduce the blazing life of the queen to tweens.

Then there were the monarchs, a notable few of which were (names linked to suggested reading) – Queen Elizabeth I of the Tudors, Queen Anne of the Stuarts, Queen Mary of the Scots, Queen Victoria and Catherine the Great of Russia.

History probably conceals many more unsung women rulers. It would be a worthwhile exercise exploring these.