Not only does the wheel keep turning, you can never really go back to where it was before - only look at it from where you are now. 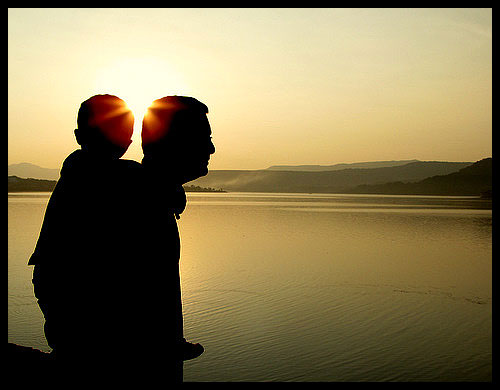 Not only does the wheel keep turning, you can never really go back to where it was before – only look at it from where you are now.

Drops of rain trickled down the overhang of my balcony. A gulmohar tree in the compound, whose branches teased the floor above, was swaying with the monsoon gusts, shedding its petals. A red carpet was forming on the wet ground.

A memory flashed before my eyes. Of rushing out of my parent’s home, on my way to town, suitcase in hand, crushing the carpet of petals on the front lawn. My Baba calling to me. “Son, remember to write to your mother. She worries about you.”

Why was I remembering this?

Nearly thirty years since Baba had passed away. A heart attack, he had not suffered, the neighbors said. I had not known that my father had heart disease. By then, I had felt completely alienated from my ancestral home. My father had lived there alone after my mother died.

A car was now entering my compound. I eagerly craned my neck, then sat back, disappointed.  Not the one that I was waiting for.

The rain had let up a bit. Some children were gathering to play football in the slushy mud.  I recognized the boy from next door. A mischievous one. My grandson was about that age now. Was he full of mischief, I wondered?

From my chair, I had a clear view of the boisterous game, the football gathering up the red petals as it rolled. A taller figure joined in. One of the fathers, I supposed. In our day, it was unthinkable to have fathers join us for our childish pursuits. Fatherly love meant buying me my favourite fruits or sweets in the first week of the month, when Baba received his pay.

I leaned back in my chair.

The rain on the tin overhang was making a peculiar pattering, like it used to, back home.

For my father, the arrival of the monsoon, had signalled a traditional sense of relief. Almost as if he still tilled the acres owned by our forefathers; and did not stamp envelopes and deliver telegrams for a living.

Money was tight. But, I always had new textbooks, uniforms and shoes at the start of the year. To save money, Baba would cycle to the wholesaler in another part of town, before school year began. He would iron my uniform himself so that I would appear neat, without the added expense.

The servant brought me tea. Bitter, but I drank it. I had no desire to make my own cup. It was my birthday today.

The tea coursed its way down my gullet, settling next to the bitter regret inside me.

Back then, I had places to go, heights to scale, people to impress. I did not have the time. Not even to write a short letter. Even during our rare meetings, I never knew what to say. He had seemed eager to share my news, and I had been vaguely embarrassed. What could a postal worker know of engineering?

In my father’s steel almirah after his death, I had found the demand drafts sent by me. Filed away and unused. I had wanted him to have a comfortable life. I had sent him money. Why had he preferred instead to live in that rundown house with no help, no telephone? I had been irritated. Even hurt.

The gusts of wind grew stronger. A gulmohar petal landed next to my chair. I picked it up. As I held it in my palms and gazed at it, a teardrop dripped off my cheek and lay on the petal. Glistening with my regret and lost chances.

The wheel was forever turning. I could never go back. Or change anything….I wish I could.

I knew why Baba had kept the drafts, even the envelopes. He had not needed the money.  He had needed a little of me.

A little time, a little conversation. A small gift to feel that he was in my thoughts, during my travels abroad. A short letter to let him into my world for a while.

He needed to feel that I loved him.

I knew now. Knew what he had felt.

My son’s rare messages on my mobile phone had been saved by me; ‘Did you get the money’ or ‘Happy New Year’. The latter perhaps sent as a bulk message (my servant had explained this to me). But still so precious.

I had been waiting all day. For my son to visit. But he had not even called. Not even to wish me “Happy Birthday”. He never did. In the world of finance, time was scarcer than the field of engineering.

The shadows were swallowed up in the night, the game drew to a close. As I watched, the tall figure of the father placed an affectionate hand on the son’s shoulder. They walked home.