I Need Feminism Until Men Stop Cat-Calling On The Road

A new 'I Need Feminism' campaign asks people to think of why they need feminism. Read the many interesting reasons people came up with, and add your own slogan!

A new ‘I Need Feminism’ campaign asks people to think of why they need feminism. Read the many interesting reasons people came up with, and add your own slogan!

The idea that women and men are equal to each other doesn’t seem so radical anymore, does it? This is the core philosophy of the feminist movement, and certainly, I can think of few women who said they didn’t want equality. Yet, many women do hesitate to call themselves feminists.

The reasons are many.

Given all the negativity around feminism, I was thrilled to see a campaign that encourages young people to talk about it, and engage with the idea.

I need feminism because?

Those of you who read Women’s Web regularly would have come across Japleen Pasricha’s writing here. Now, Japleen has been running since the last year, a Facebook page called Feminism in India, and some time ago, she organised an “I Need Feminism” campaign at the Indira Gandhi Institute of Technology (IGIT) and Ambedkar University Delhi (AUD), both in Delhi.

The idea was to ask students to create their own slogans around the campaign, and pose for a photograph holding up this slogan. You can see all the slogans here, but I have shared below some of my favourites from the set. 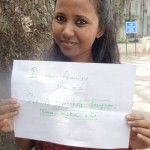 I deserve Respect as Me 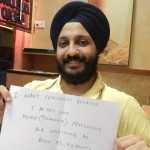 Really, do we need to ask? 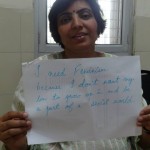 Raising a son who believes in Equality 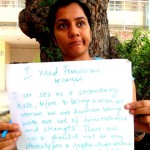 A woman second, A human being first 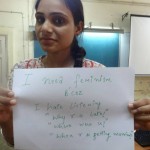 Who likes to be controlled? 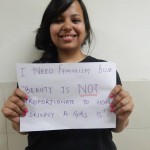 Women are more than their bodies

“Our team reached IGIT at 10 AM and started preparing for the long eventful day. We began by asking people what they understand by theterm ‘feminism’ to break the ice. Once the discussion got into gear people started warming up to the idea. After that it was one slogan after another, we were running from one group of excited students to another….

After collecting a good amount of 45-50 posters from IGIT, we then rushed to AUD where we got an even better response and quality conversations on related topics like gender, patriarchy and women’s rights. Some of the students were skeptical and some didn’t want to include the term ‘feminism’ in their slogans but almost everyone wanted to participate…. The campaign ended around 4 PM when we started counting our posters and realised that we have crossed our target of interviewing 100 people. “

Now, here comes the fun bit for you to participate as well, regardless of where you live.

Japleen and the team are now taking this campaign online, to reach more people beyond Delhi. Here is the online event page and you can take a similiar pic of yourself, with your own reasons, and either upload it on the wall, inbox them, or email it to them at [email protected]

Think about it. I believe it will be pretty easy to find that reason! Hope to see you a part of this engaging project. I for one, firmly believe that we need feminism, although I will be happy for the day we don’t, and also – that Feminism needs us to spread the word too.

(And if you were curious about the title – that is the first reason that came into my head.)