Are older people incapable of adapting to change? Or is adaptation a factor of more than just age? 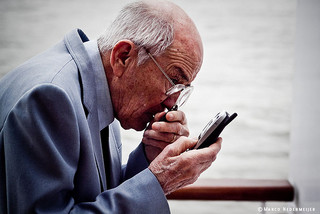 I came across a rather curious letter recently, over at the IHM’s blog, from a young man who fears that his prospective wife will not love his parents as much as he does, that she will have an individualistic view of life, while he believes that the individual is not as important as the family unit. Without getting into my thoughts on his rather unrealistic wishes, one thing that struck me was the implicit assumption that older people cannot change – and the wish that they should not have to.

Is this true? I don’t recall where I read it, but I remember reading some research once that said human beings were at their most adaptable in their 20s or 30s, and adaptability began declining after this age. However, I also feel that how we view old age (both as young people viewing our elders and while growing old ourselves) is also a matter of culture. Why is it that we often see older people from Western countries travelling, eating out, having hobbies and interests, while older people in India are generally expected to act as caregivers for their grandchildren and rarely do stuff for themselves? Of course, it is also a question of how we define enjoyment – it is entirely possible that for many older people, being with their grandchildren is the most enjoyable thing to do.

Similarly, I feel that adaptation and degrees of adaptation could also vary widely – depending on learning, exposure, circumstances – and one’s personality. Even if adaptability goes downhill, one older person adapts to changing circumstances more easily than another. After all, how do parents of girls “adapt” to their children leaving home to get married while parents of boys feel that they have been dealt an injustice if their son moves out to set up his own household? Both face situations of adult children leaving home, but the girls’ parents adapt because they have long expected that this is what will – and indeed should, happen.

My grandmother, who grew up in a strictly caste-conscious era and has always regarded our caste as ‘superior’, remarked when she learnt of my decision to marry a man from a totally different caste, region, language, “How does it matter? Are they not human beings too?” At that time, she was already past 80. I don’t know if her views on caste have fundamentally changed or ever will, but certainly, they are not the same as what she held even 10 or 20 years ago. Among other things, inter-caste marriages and the opportunity to interact closely with people from other castes are a factor in making people realize how meaningless casteism is.

We do older people a disservice when we assume that they cannot change, do not want to change. People who are open to learning continue to learn, even if the rate slows down over time. Certainly, there are people set in their ways and convinced that they know it all – that theirs is the final word and they have nothing to learn. Interestingly, I have seen enough of such folks in my own generation too.