Are item numbers art or a collection of anatomical images served up in the guise of a woman? 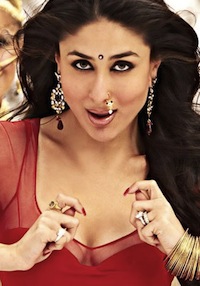 Last week, I came across one of those all too common, ‘hot’ pictures of aspiring Bollywood actresses in a popular, mainstream newspaper. No doubt, said newspaper assumes that no one under the age of 13 reads newspapers, or even if they do, they are in any case bombarded by such hotness from every other medium, including the promotions for ‘item numbers’ on every television channel that there is no need to consider the age-appropriateness of any visuals used.

What really caught my eye was the caption this hot picture carried. It helpfully mentioned that the pic in question was from a shoot for a calendar that the actress was being featured in, and said calendar was a “collector’s item, just as she is.” When does a woman become an item? And who is ‘collecting’ these women?

As a feminist who believes in women’s autonomy, including the right to wear what one wants, item numbers nevertheless make me uncomfortable. It is not even so much the lack of clothing that makes me uncomfortable; it is the unimaginative costumes with their relentless focus on strategic parts of the woman’s body – the heaving chest and the wobbling behind that the camera embraces as though a woman were a sum of these two alone. Forget the item girl – this is not even a whole girl (or woman), but a collection of anatomical images served up for the pleasure of a (presumably) male viewer.

While the actresses who do these item numbers derive a lot of fame and appreciation, the images served up rarely give us anything coherent – it’s certainly not a showcase for her emotive skills. Replace Kareena with Katrina or any other popular actress, and the camera will continue its zooming in on boob and butt. Presumably, the film-makers have never heard of any other erogenous zones, or that sex really happens between the ears or that – gasp – women could get pleasure as well as give.

And then, never mind that some of this disembodying of women takes place in a movie like Ra.One touted as a movie for kids. No sex education for our kids, thank you, but we’re happy to help them learn that the value of a woman lies in two things chiefly.