Meet India’s favourite contemporary author Anuja Chauhan who blends romance, drama and humour effortlessly. She will be in conversation with Tisca Chopra in Mumbai on 23rd June.

When it comes to writing highly readable novels with endearing characters and relatable yet quirky plots, Anuja Chauhan has few equals today in India. In Battle For Bittora, she gave us a peek at the dust and drama of elections in India, with a big dollop of romance to liven it up. In Those Pricey Thakur Girls, and The House That BJ Built, she introduced us to the five strong-minded women of the Thakur family with their attendant triumphs, heartbreaks, and infighting.

Love in the times of war promises to be a gripping theme, and here’s your chance to be involved in all the excitement:

Join us with Anuja Chauhan for one fun meet, where we’ll meet this popular author in conversation with Tisca Chopra!

Mark yourself as going, here on our Facebook event page. 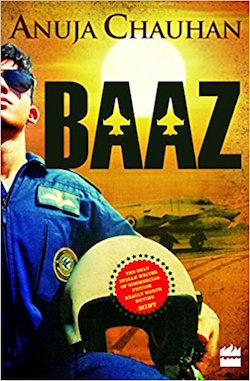 ‘Why do they call you Baaz?’
‘It means falcon,’ he replies solemnly. ‘Or bird of prey. Because I swoop down on the enemy planes just like a Baaz would.’
Then he grins. The grey eyes sparkle.
‘It’s also short for bastard.’

1971. The USSR-backed India-Mukti Bahini alliance is on the brink of war against the America-aided Pakistani forces. As the Cold War threatens to turn red hot, handsome, laughing Ishaan Faujdaar, a farm boy from Chakkahera, Haryana, is elated to be in the IAF, flying the Gnat, a tiny fighter plane nicknamed ‘Sabre Slayer’ for the devastation it has wrecked in the ranks of Pakistan’s F-86 Sabre Squadrons.

Flanked by his buddies Raks, a MiG-21 Fighter, Maddy, a transport pilot who flies a Caribou and fellow Gnatties Jana, Gana and Mana, Shaanu has nothing on his mind but glory and adventure – until he encounters Tehmina Dadyseth, famed bathing beauty and sister of a dead fauji, who makes him question the very concept of nationalism and whose eyes fill with disillusioned scorn whenever people wax eloquent about patriotism and war…

Pulsating with love, laughter and courage, Baaz is Anuja Chauhan’s tribute to our men in uniform. Get your copy here.