Running In India: Women Take Off!

Running could be a great addition to your health and fitness routine; but how feasible and safe is running in India? 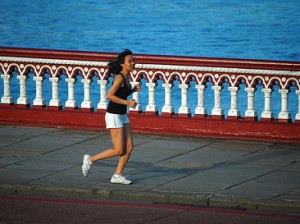 Running could be a great addition to your health and fitness routine; but how feasible and safe is running in India?

Health and fitness is slowly gaining importance in the lives of Indian women today. Be it walking, Aerobics, Yoga or Zumba, many Indian women these days engage in one form of workout or the other. Of late, running has also been gaining importance in India. It is obvious from the number of running groups in India, and women participating in marathons and half marathons that this sport has gained a lot of popularity in recent times.

Runner Girls India (RGI), one of the largest network for female runners, was launched in Bangalore in 2007 with less than ten members. Today, RGI has close to 400 members and has expanded to various cities in the country and overseas as well. Mumbai Runner Girls and Diva Runners in Delhi are also some other popular running groups in India.

“One of the main reasons why running has gained a lot prominence is because it helps you fight stress levels and stay completely healthy,” says Naina Lal, founder of RGI. The largest running event in the country, Standard Chartered Mumbai Marathon, saw a steady increase in the number of women participants this year; according to the organizers the extra 1000 – 1500 spots which were exclusively allotted for women were all filled up.

The Mumbai based DNA conducts a Ladies Only Half Marathon with varying categories earmarked for 5km, 10km and 21km and over 3800 women took to their feet this year for a social cause! What is also interesting to note is that running is not restricted to just young Indian women. Go to Mumbai Marine Drive on any Sunday morning at 6:00 AM, and you will be inspired seeing the number of elderly women sweating it out by the sea face.

Having said all of that, another important question still remains to be asked; is running on Indian roads really that easy for a woman? Sadly the answer is no. I remember having a conversation with a close friend of mine, a young mother, doctor and a marathoner who moved from Kerala to New Jersey. She was describing how much she loves the sport and I recall this statement distinctly: “You know Piya, I am not really sure if I would have been able to run so regularly on Indian roads.”  For anyone who has lived in the country at any given point of time, the reasons are really a no-brainer.

Safety tips when running in India

Picture an Indian scenario: unfortunately the majority of images that come to our minds are uneven roads, exposed garbage, potholes, hawkers fighting for space and burgeoning traffic. Apart from a stray dog or two who may take a fancy to you, street sexual harassment happens to be the biggest deterrent. Roshni Rai, founder of Mumbai Runner Girls acknowledges these problems but insists, “If one is training for marathons, you have to practice on the road atleast once a week.”

Based on my own experiences and in conversation with a few other enthusiasts and professionals, here are some pointers if you want to embrace running in India:

– Be an early bird: It always helps to wake up a little early and hit the road for a comfortable run. Ask most Indian women who run and they will tell you that mornings work best and evenings are avoidable. “Mornings always work the best for me, I feel fresh and safe. Most of the roads are so poorly lit in the evenings,” says Ruta Vaidya, a working woman and a running enthusiast. This is also the time when the weather is normally at its best and street sexual harassers are mostly at bay.

– Get the right gear: Invest in good quality running shoes and comfortable running clothes. “One should be comfortable with whatever one is wearing. Usually I avoid running shorts which are too short if I am running alone. I wear knee length track pants,” Roshni Rai adds.  I cannot agree more.

– Choose a residential park/track: Running in enclosed parks, running tracks, or a jogger’s park is a safer option if you are a lone runner. I stay in one of the most crowded suburbs in Mumbai and running on the road is far from a comforting thought. The last time I ventured out, I had to stop every few minutes either to sidestep garbage or to avoid colliding with a reckless cyclist.

– Carry an ID proof document and a mobile phone: If you are on the road and running alone, it is very important that you carry a document of identification and your mobile phone so that in a worst case scenario, you can call for help or if you are injured, even a stranger can contact your relative for help. It is also a good idea to always keep some extra money in one of your pant pockets.

– Run with a group: This is definitely the most common safety measure that Indian women can adopt when running. “Find a group who runs on that same route and that is the safest option,” remarks Roshni Rai.  This is also a common rule in all running groups. If you don’t want to be a part of any official running group, choose a friend or a group of friends in your area and you are all set.

Whether it is for a cause or just for fun, running is a great way for Indian women to maintain their health and fitness. Be warned though, once you get started, it can get highly addictive! Ladies, let not the hostility of Indian roads scare you from enjoying your favourite sport! Lace up your running shoes and Get, Set, GO!

A marketing and communications professional for over 3 years, Piya Jayarajan is passionate about the written word. An avid reader and blogger, creating anecdotes is what she enjoys the most. read more...