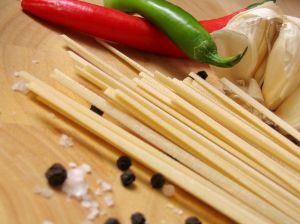 In Pursuit Of Epicurean Inspiration

Everyday cooking can often erode the magic and joy of cooking. All the more reason, to get inspired with a simple and easy spaghetti recipe!

As kids we must all have gone through the phase when mothers would act hammy, let out a hapless sigh, look heavenwards and ask, “Now, what do I cook today?”. While the answer never came from above, I could scarcely fathom my mother’s dilemma (specially, in light of my algebra problems) that something as trivial as this might warrant divine intervention; till it was me standing in my kitchen in a quasi-meltdown state, asking the same question.

I remember reading: When a man says, “I have nothing to wear”, while perusing his wardrobe, he actually means, he has nothing clean to wear and when a woman says it, she means she has nothing new to wear. Using that logic, I wasn’t bringing anything new to the table, quite literally. In retrospect, I was clamouring for inspiration, so was my mother and all those women for whom, there comes a stage when cooking turns into this insipid mundane chore, when all you care is to be united with the take-out menus.

While juggling a home, full time job and a two-year-old marriage, I had reached that spot too soon where any food that came bottled, tinned or packed was a life saver. Little did I know that intervention was on its way when we moved base from bustling New Delhi to south Germany’s quaint Alpine town of Munich.

While juggling a home, full time job and a two-year-old marriage, I had reached that spot too soon where any food that came bottled, tinned or packed was a life saver.

Munich’s high living costs made random eating out almost redundant, which meant I was to inspire myself to cook more often. With a handful of Indian recipes in my kitty, I was hardly warming up to the prospect. So I began scouting the city’s nifty supermarkets and historic (some dating back to the 17th century) fresh farmer’s markets looking for inspiration.

I watched people feel luscious tomatoes in their hands, checking asparagus and brussels sprouts for freshness, picking out peppermint and hibiscus tea bags from counters, sniffing fresh marjoram and thyme, sampling feta cheese with herbs and olives, picking loaves of whole-grain bread, a jar of sunflower seeds, queuing up for freshly cut slices of salami and bacon strips and then loading up on cartons of beer and sacks of potatoes.

My covert operation was a good start but inspiration, as I soon found out is most elusive when you chase it in the Holmesian spirit. It’s not a task; it’s a process that needs time, patience and heaps of curiosity. So I signed up for German classes. Soon I was blurting out vegetable and fruit names in Deutsch, reading labels on jars, identifying Angebote (special offers) in supermarkets, making basic conversation with vendors and even ordering food off the Speisekarte (menu cards). I believed I was getting closer, so I pursued further (though, not so clandestinely as before).

On occasional eat outs, I would stare unabashedly at other diners’ food, read out the ludicrous names on the menu and study their fancy descriptions in English and wonder – why does Bruschetta need balsamic vinegar or why do prawns in coconut curry always taste heavenly. What might have been gross embarrassment to my meal partner was supremely educational for this benighted soul for I dissected my food, smelled it, touched it, rolled it around my tongue, felt it against my palate and produced mumbling sounds.

I wasn’t eating to just fill-up; I was unfolding the surprise and delight of treading an unknown cuisine – the taste of warm crusty Apfelstrudel (a traditional Austrian pastry popular in Europe) against creamy vanilla ice-cream. And I was beginning to be conscious of flavours in isolation and in harmony, like sensing that subtle hint of saffron almost obscured in Paella de marisco (Seafood Paella – a Spanish rice dish) or the refreshing scent of lime leaves in Thai green curry that makes it divine.

One of my vivid memories of sublime dining was when I chanced upon a rustic dish of lemon chicken with coarse rice at an atmospheric Greek tavern in Santorini. Struck by its blatant simplicity, unpretentious presentation and superb juxtaposing of flavours – the moist meat doused in a pale garlic-lemon broth garnished with fresh herbs – I had this unrelenting urge to recreate it in my home.

Since then I have been pinning down random frames of my travel memories – like eating scrumptious Aglio e Olio at a modest trattoria in Vatican City or noshing on Papoutsakia in a crowded neighbourhood of Athens or tasting pita bread with Hummus in Lisbon’s old quarter – through food onto plates.

I realized – when you put all your senses on high alert and pass every morsel under the radar of consciousness, that’s when a simple meal becomes transcendent and that’s precisely when you are inspired. So, look around, wonder, ask questions, experiment, make mistakes, let your curiosity guide you to discover new things and as Julia Child said, “Above all, have a good time!”

My inspiration led me to discover eclectic cuisines across the world and recreate them in my own kitchen, sometimes adding my own spin to classic recipes. It’s really been ages since I asked myself that dreaded question, What do I cook today?

This is my go-to recipe whenever I am pressed for time or too lazy to cook anything elaborate. The literal translation of this traditional Italian pasta dish is – “Spaghetti in garlic and olive oil” and is very popular across the country. Though delicious on its own, I like to add prawns and Shitake mushrooms to add substance. Also, I love garlic, but feel free to go easy on it, if you’re not a fan. Buon Appetito!

A slice of lemon

Coat the prawns in cornflower, salt, pepper, a dash of lemon and few drops of olive oil. Heat a tsp of olive oil in a frying pan and sauté the prawns for about 3 minutes until pink and firm. Keep them aside.

Cook pasta in boiling, salted water until al dente. Drain the pasta, reserving some of the cooking liquid.

Meanwhile heat rest of the olive oil in a saucepan over medium – low heat and toss in the garlic and red pepper flakes. The idea is to infuse the smell of garlic in the oil.

When the garlic turns slightly brown, add the mushrooms and some salt and stir them together. Drizzle some oil if it becomes dry and cover it till the mushrooms become soft.

Turn off the heat. Add the pasta, the prawns and toss everything together. Add the reserved liquid if mixture seems dry and serve immediately.

Somali Roy is a freelance writer, foodie and a passionate traveller based in Singapore. She