Chasing The Yum On A Greek Island

Simple, unpretentious and rustic – this lemon chicken recipe is as hearty as any you would find on an idyllic Greek island! 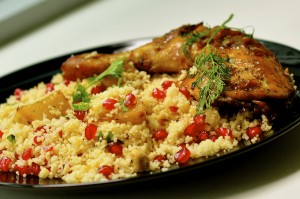 Simple, unpretentious and rustic – this lemon chicken recipe is as hearty as any you would find on an idyllic Greek island!

Excuse the petulance, for patience is not the virtue of a soul that has worked up a sizable appetite, from treading the unwieldy slopes of a volcanic island floating in the Aegean Sea; pursuing a local dining spot, tucked away from the tourist trail.

The tip-off came from Christa, the mid-aged, Austrian apartment-hotel owner with a dozen pet cats. A resident for three decades, she claimed to know this prehistoric Greek island like the back of her immaculately manicured hands. Thus we took the bait.

While some parts of Europe were raking up fall leaves from their backyards in the nippy October air, Santorini’s scorching sun bronzed our bodies in the day and its decadent cuisine soothed our souls in balmy evenings. It was one of these days from La Dolce Vita that was set aside in pursuit of a gastronomic experience, that hopefully wasn’t boxed, circled or underlined in guidebooks held by every bedraggled tourist in town.

So, at sundown, we set off under the purple sky, past blue domed Byzantine churches whose tiered bells resonated beyond the caldera. A handful of thatched windmills towered above the ruined fortifications of a medieval castle; a trail of surefooted mules, trotted down the steep stairs after their herder, snazzy taverns decked up in bead lighting and bright bougainvilleas reverberated with hip-hop music. Frantic busboys were setting up tables and waving plastic menu cards at every passing face.

Street traders peddling overpriced tchotchkes, olive oil and feta cheese, chic art galleries housing abstract oil paintings, an artisanal puppet shop, retro cafeterias, all lined the narrow stone paved lanes of Oia, a scenic village in the north. When the bustling lanes segued into dark lonely stretches, a stray cat would meow demurely and keep us company; a faint clinking of glasses would float from an open window with laced curtains drawn aside and a whiff of herbed lamb roasting in a kitchen rotisserie would set our bellies rumbling.

Far off, 11kms to be precise, the tiny sparkling lights of Fira – capital of Santorini and our destination – resembled precious gemstones studded haphazardly into the dark crevices of the island’s precipitous slopes.

Only when the rickety pedestal fans creaking at the corners offered some respite, did we soak the atmosphere in. A black slate bore the day’s specials in white chalk, lilting notes of folk music revved up the scene, boisterous Greek families seated in circles shouted over each other, passing plates, gesticulating at the service staff, bursting into deep throated laughter. Occasionally the semi bald chef would gallop out of the kitchen and banter with the diners in his raspy smoker’s voice or welcome known faces with backslaps.

The convivial rustic setting had lifted the comfort level enough, for the chipped ceramic plates nursing our order of Kotopoulo me Lemoni sto fourno me Patates (Roasted lemon chicken and potatoes) to be ignored.

However the dish looked as spartan as the room’s setting.

The centrepiece – two well-done thigh pieces, bit charred on top – was moist and fork tender. A pale yellow sauce, gentle on the palate yet distinctly acerbic from the lemon, nestled the meat. The soft flaky potatoes cut the richness of the sauce and a second helping revealed how smoothly the pungent garlic balanced the refreshingly fragrant oregano, while stewing in the broth. All this laced with generous amounts of olive oil and juices from the chicken lent that warm comforting dimension to the meal.

It wasn’t just a dish. It was a compounding story. One that was succinctly shrouded in delicate layers and wrapped around bold elements, worthy to be unravelled by a discerning traveller who had hiked three hours on a tedious route, in heat and humidity and would do it all over again.

I always let the memory of taste guide me more than black and white recipes. Recreating this dish in my kitchen took a while, because I was sceptical that a less than perfect turnout would tarnish the singular image of that unparalleled experience. But fortunately it’s difficult to foul something as simple to cook as this one. The ingredients run the show; you just have to trust their camaraderie.

The only quibble though, is that this dish is time consuming. But good things come to those who wait, right?

We were served a bowl of coarse white rice and homemade bread to accompany this dish. A simple salad, some garlic bread or even couscous with some herbs and a handful of pomegranate seeds thrown in (as in the photograph) works beautifully.

Rinse the chicken pieces and pat dry with a paper towel. Make diagonal cuts on the thickest portion with a sharp knife, for the marinade to penetrate and flavour the meat.

Sprinkle salt, black pepper, garlic-onion powder and oregano evenly on both the pieces. Using generous amounts of olive oil, massage these spices on the chicken.

Peel and cut the potatoes in quarters and use the same spice mixture to coat them. Set aside for a while.

Pour one cup of stock into the pan and squeeze half the lemon.

Roast the chicken at 175 degrees C for 50 minutes. Baste the chicken pieces with juices from the pan at regular intervals.

At the end of 50 minutes, throw in the potatoes around the chicken, squeeze other half of the lemon and pour rest of the chicken stock into the pan. Turn the meat over and set the oven at 175 degrees C for another 50 minutes. Keep basting at intervals.

Once done, take the pan out of the oven and let the chicken rest for 10 minutes before serving.

Somali Roy is a freelance writer, foodie and a passionate traveller based in Singapore. She always has an interesting story up her sleeve, for anybody who's ready to listen. She blogs at read more...