Somali Roy tells us that her eyes were opened to the reality of womanhood through Tehmina Durrani's My Feudal Lord. 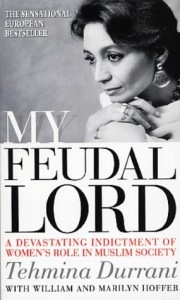 Somali Roy tells us that her eyes were opened to the reality of womanhood through Tehmina Durrani’s My Feudal Lord.

Somali, in her own words: A freelance writer, foodie and a passionate traveller based in Singapore. She has an interesting story up her sleeve, for anybody who’s ready to listen.

I do not own the book that hooked me. A friend loaned it to me over a decade ago and I returned it after reading. So, what I write here is from memory, and in a way that’s good because a decade has erased the sundry and filtered only the parts that matter.

Growing up in a small town, I never realized that I lived in an opaque sanitized bubble – where my womanhood was sheltered, protected and cared for by parents. When I moved away, the bubble got flimsy. I was put in charge of my womanhood, but still too naïve to realize that you can’t just wear it like a batch pinned to your school dress. You are needed to protect it with an intensity that goes deeper than your mother’s wisdom talk – do not answer eve teasers or look at them in the eye, just walk away – and sharper than the safety pin you must carry on a crowded bus.

My Feudal Lord finally burst that bubble. For those who haven’t heard of the book, it’s the autobiography of a Pakistani author, Tehmina Durrani, who takes us on a journey from being born and raised in a repressive society, to enduring a traumatic marriage as the wife of Ghulam Mustafa Khar, a visible politician during Zulfiqar Ali Bhutto’s government and inveterate woman abuser to being emancipated and contesting for the rights of women.

Imagine my surprise when I read comments in a forum, blatantly deriding Durrani for coming out in the open and exposing “spicy” details of her life. Like telling the world, how her husband raped her when she went to visit him in jail, while her body was recovering from fresh surgery, or his incestuous relationship with her younger sister while they were married, or how he robbed her of the last drop of human integrity, when he battered her with a shot gun and stripped her naked?

Her father urged her not to file for divorce, “You can only leave his home in a coffin”. And her mother’s advice to deal with a ‘husband who behaves in a strange or unreasonable manner’ was to treat him like a sick patient who needs medical attention – “Deal with him like a psychiatrist”.

Being the citizen of a patriarchal society where the cultural norm for women is to remain silent against oppression, I sensed the stifling darkness of the corner she was pushed into, which led her to offer “spicy” details of her life for public consumption.

This book spoke to me about the extent to which feminism can be exploited which is boundless it seems, the extent to which conventional upbringing turn women – both the victim and her mother, in this case – as enablers, accepting such inhumanity as “fate”, reconciling with destiny and the implausible extent to which she endures it in silence, careful lest she harms the “honour” of her man, secretly pushing her pride under the carpet till it’s stained with her own blood.

“A prisoner ultimately settles into a monotonous routine. Anger recedes, senses dull. The spirit is crushed,” surrenders a pregnant Durrani after being brutally bashed by her husband because she visited a male doctor.

I don’t own this book because I don’t need to. It stands on a shelf somewhere deep, reminding me that there are countless shoulders that slump and ache with the burden of womanhood, while I have the luxury of flaunting it as a coral brooch pinned to my dress.

Somali Roy is a freelance writer, foodie and a passionate traveller based in Singapore. She always has an interesting story up her sleeve, for anybody who's ready to listen. She blogs at read more...