The Unvanquished Queen: Book Review of The Fisher Queen’s Dynasty

This book by Kavita Kane delves into the mind and the heart of the grand matriarch, Queen Satyavati, who set in motion, The Mahabharata.

“I learnt to love like a man—to love without feelings. And I shall never forget this lesson.”

Old wine in new packaging? Yes. Man-bashing, marriage-bashing, motherhood-bashing? Not really! Then what is it that sets “The Fisher Queen’s Dynasty” by Kavita Kané apart from the run-of-the-mill books based on mythology?

It delves into the mind and the heart of the grand matriarch, Queen Satyavati, who set in motion a sequence of events that led to the Mahabharata, the great internecine war for succession between the Kauravas and the Pandavas. It retells the story of a time, before hundreds of cousins, their elders and all those with a vested interest, bayed for each other’s blood, though the woman who was as regal as she was unscrupulous in the pursuit of her desire to secure the throne of Hastinapur, had never contemplated such a tragic conclusion of the famed dynasty she got wedded into.

Matsyagandha, Yojanagandha, Kali, Daseyi and Satyavati. The various names an abandoned child born out of an illegitimate union got. Discarded in favour of her fairer and more handsome twin, Satyavati, brought up by the fisherman chieftain, learns early in life, that her looks are both her asset and liability. Nothing that the present-day woman can’t relate to!

Seduced by a powerful rishi and getting gifts for life, she knows that the only way to get out of the quagmire of poverty and the lecherous looks of her neighbours is to ensure that she becomes a queen. So, what if her rights as a princess were denied to her by her father? Naturally, when King Shantanu, finding solace through his womanising attempts, falls for her hard, her fisherman father exacts a terrible oath from the noble and brave heir prince Devavrata, that he will relinquish all claim to the throne and only the children born out of his ageing father, Shantanu and the young Satyavati, would rule over Hastinapur. Moreover, he will have to take the oath of celibacy.

Distinctly uneasy over the huge sacrifices made by Devavrata, now known as Bhishma, Satyavati, has to contend with unrelenting hostility from the family, the nobles, the servants and just about everyone at the palace who hate her for stealing the rights of Bhishma. As for the general public, the scathing vitriol they pour out on the new queen is enough to faze anyone, though not the ambitious woman who never loses her sangfroid. Even when the heirs to the throne, Chitrangad and Virya are born, it is only by her tactfully implying that they are in the loving care of their far older stepbrother, that the public gets slightly mollified.

Is life kind to Satyavati? Is Bhishma the only ally she gets in life? Is she a heartless woman who puts self-interest over all other considerations? Does she deserve all the ire directed at her? What of the other self-righteous men and women who are all culpable in some or the other way?

What The Fisher Queen’s Dynasty does, is to make the modern-day reader realize all over again, how virtue and chastity, are terms invented by patriarchy to suit its purpose. It makes us ask why it is only a grave misdemeanour when men think about upholding their code of ethics but it is a crime, nay, a sin if women seek independence of thought and action. It makes us wonder why a child should bear his/her father’s legacy but take for granted his/her mother’s contributions.

The Fisher Queen’s Dynasty merits a reading not only because it makes one know about the motivations driving the most powerful woman in Indian mythology but also shows how she was more sinned against than sinning. It merits a reading because the bestselling author Kavita Kané, who debuted with her compelling Karna’s Wife in 2013, has once again done justice to a woman character, making the reader sympathise with someone who has perhaps been treated just as a footnote. It merits a reading because both the monologues and the dialogues of the queen mother and her coeval stepson portray the horns of the dilemma the two strongest people find themselves repeatedly on!

My rating? 4.2 stars certainly! Do read it, especially if you like strong women! Also, if you feel idealism is worth it for its own sake!

P.S. If you wish to read more on the background of one of the most significant women in the world’s longest epic, check out this link.

A bibliophile since childhood, I am a lecturer in one of the most prestigious schools of Prayagraj. Teaching is my vocation. A voracious reader, I veer towards feminist writings and draw inspiration from every strong read more... 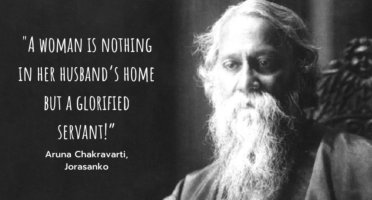 Tagore Was A Great, 'Progressive Man', But Did This Extend To The Women In His Family?