I Wish I Had Spoken Up! I Felt Left Out & Angry On My Own Sister’s Engagement Due to Outdated Traditions!

Wearing kajal & looking pretty, I was excited for my sister's engagement. But the outdated traditions made me angry & I wish I had spoken up!

Wearing kajal & looking pretty, I was excited for my sister’s engagement. But the outdated traditions made me angry & I wish I had spoken up!

I was not used to sporting vibrant kurtas or having mehndi-clad hands. But it was a special occasion as my sister was about to get married. No, not on this day. Today was just the informal engagement day, as I liked to call it. Or nischayam, as everyone else called it.

The day where the two families met at the bride’s place, talked in hushed tones and shook firm hands. In simpler words, the day they formally finalized the wedding in the presence of the immediate families.

I was not sure what exactly was to happen in this ceremony. My role was to stay hidden away in one of the bedrooms, making small talk with the visiting relatives while stealing glances at myself from the almirah mirror. It was not every day that I smeared kajal in my eyes. I looked pretty today.

It began when someone announced the arrival of the groom’s family. The passage to the living room suddenly had an in-and-out flow of aunties setting up the snack table. The bedroom guests, not important enough to make it to the heart of the action, stood in the doorways with craned necks. I did too.

I could not hear them from the room. But from what I could see, pleasantries were exchanged, and approvals were conveyed. However, I noticed that only men were seated for the discussion.

Now on my toes, I scanned the room for the bride’s mother. I found her standing right behind the father, facing the special guests. She was in a position of importance, surely, but visibly second to the man. I wondered why she did not choose to sit next to him, to join in this formality as an equal participant. Maybe I was overthinking it. I shrugged it off.

The ceremony was done soon enough, and the crowd dispersed. The kitchen continued to have an in-flow of aunties, offering a hand in the hustle. I wondered yet again how odd it would seem if the uncles did the same.

It should not be odd for them to casually walk into the kitchen and offer help. But it was. One could argue that it was simply that women joined in women’s company and that men did likewise.

But we know too well that the cluster of women in the kitchen today was formed through generations of gender norms followed in every Indian household. Again, it did not matter now that aunties huddled in the kitchen.

I began questioning every outdated tradition & vowed thing would be different for me!

I found myself questioning every little tradition being followed ahead. Like why the bride was heavily laden with gold to display their wealth on the wedding day, or why getting married meant the bride had to move to the groom’s house.

They seem like silly questions whose answer we all know. Patriarchal traditions, of course. But if we know that answer, why are the traditions still followed even within our ‘modern’ communities? Why do we not call them out like the other gender-discriminatory acts?

The answer is that they are simply not important enough. Because they harm nobody, and hence are easy to overlook. So we continue to follow them. We choose to shrug it off. I wanted to choose otherwise. So I vowed to myself that things would be different with me, or even with the ones close to me if I could help it.

That resulted in my trying to stop my sister from wearing a second gold chain on her engagement day. I almost snapped at the beautician for insisting on it. But I had to remind myself that though this may be an act of rebellion for me, it was a matter of choice to my sister. It was her day, not mine!

People around me scrambled to find that cousin brother of ours who was around there somewhere. He was found and summoned to the dais. He joined my parents up there. And then the rituals began, while I stood there transfixed among the audience, boiling with a rage I did my all to suppress.

They would call me too, I thought. Any moment now. The groom was summoned. And then the bride. And I remained where I was. When the rituals were done I walked up there myself, laughing about being left out of my own sister’s engagement. Because it wasn’t important, right? I had to shrug it off.

No one could understand why I was offended…

This wasn’t worth creating a scene on an auspicious day. I didn’t want to be the one to cause trouble. Or maybe I just didn’t have it in me to speak up. Having brought it up after it was all done, I was surprised to see that no one thought it was something that would offend me.

No one had thought it wrong until I pointed it out, that I, the bride’s sister, deserved a place on the stage as her family. That is how ingrained the system is in our minds, that we fail to see patriarchy in plain sight.

I knew their hearts were in the right place when they apologized to me later. What was done was done.

I wish I had spoken up against these patriarchal outdated traditions!

I wish I had not gulped my anger and shrugged this off at the time. I wish I had spoken up then so that it didn’t happen at all.

How often do we shrug off little acts like these? How often do these continue to contribute to the patriarchal outdated traditions today? How much longer will it take for us to speak up and say no?

Each little act matters. Each tradition we follow is questionable. And in each of the things we do there is a choice. The choice of standing in our rightful position rather than in someone else’s shadow.

And all I wish for is that we begin to exercise it. 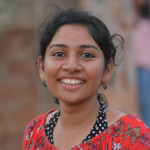 Software Developer | Blogger | Author of 'An Ode to the Self' read more...