Channapatna’s Women Artisans Prove That When Women Decide Something, Nothing Can Stop Them!

From fearlessly handling lathe machines to excelling in lacquering, the women of Channapatna are doing it all! Here are some of their stories.

Twenty-eight year-old-Pallavi made no earnings during the lockdown period. Her brother was out of work as well but the family of five got by because of a loan.

Pallavi’s mastery over the woodcraft of Channapatna became the guarantee that instilled confidence in money lenders to help her out financially. Post-lockdown, Pallavi is back at work and repaying her loans.

Hailed as the Toy Capital of India, Channapatna is only 70 kms away from Bengaluru. Tipu Sultan, the then ruler of Mysore was gifted a lacquered toy from Persia. He was so impressed by the craft that he had his countrymen learn the technique of making lacquered wooden toys.

They may be fewer in numbers but they are excelling

Aale mara or ivory wood is cut into pieces and placed on either a hand-operated lathe or mechanised lathe. The artisan chisels the piece according to desired designs. And the work is coated with a lacquer made of vegetable dyes.

Ever since its inception in India, the craft has remained a male bastion but in the last few years, women have been entering the fray as well. As compared to their male counterparts, women artisans are few in numbers but the tribe is slowly growing.

They fearlessly handle lathe machines to turn the wood and excel in lacquering to create high-quality works. Shaheda Noori who is part of Maya Organic says Pallavi is not only a talented artisan but also has leadership qualities.

“Pallavi worked with us earlier but now she works for an ex-colleague and manages the entire unit. She has the potential to become an entrepreneur and run her own business,” feels Shaheda.

They have had their fair share of challenges too!

In 2001, when Maya Organic started training women in Channapatna toy craft, it was a very different story. “Being a labour-intensive job, parents were concerned about their daughters handling these machines and getting injured. They worried about saw and dust affecting their girls’ faces. For conservative families, sending their daughter to work amidst men was also an issue.

“We would have to convince families to send their womenfolk to get trained. They would come, complete their training and then sit idly at home. These issues are still there but the mindset has slightly changed. Earlier people thought women can’t do it now we get orders where they specifically ask for it to be done by women artisans,” says Shaheda. Maya Organic currently works with 70 artisans out of which 40 are women.

In the decade that Pallavi has spent as a craftsperson, she has dealt with several challenges at work. Recalling one, she says, “A lot of men would take off their shirts while working especially in summers which would be awkward for women workers around. So, we complained to the supervisor and the issue was sorted.”

Some women also take to woodturning and love it!

Though several women do supportive jobs and help their families, few take to turning, one of the most important and technical aspects of the craft. Shaheda remembers S Sarla to be an expert in woodturning.

“She could do the most complicated work with ease. At times when everyone would be wary of doing a design-oriented sample piece for a special order, Sarla would readily agree. If that didn’t pass the test, she would do it again.”

Sarla supported her family for 15 years with her earnings but after she got married and had a baby, she had to quit her job. “I had three sisters and three brothers so I had to earn to support my family but I loved my job. Ours is a nuclear family and I have a two-year-old child. There is nobody to take care of the baby while I work,” says Sarla.

A trailblazer who started small

Noor Salma is a trailblazer of sorts when it comes to Channapatna. An artisan par excellence, Salma has been running her own business – NS Toys, since the early 2000s. Today she works with 65 people in her unit, collaborates with well-known designers from the country and participates in exhibitions in India and abroad. 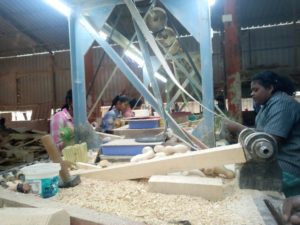 While growing up, Salma tells me she was consumed by the passion for Channapatna. She would bunk school and secretly watch artisans at work but her strict parents didn’t allow her to take it up. “But when I got married, nobody stopped me. In fact, they supported and encouraged me.

“My father-in-law used to make Channapatna toys at a very small scale. I told him I also want to do it and expand the scale. He said go ahead. My mother-in-law passed away very early on. So when I would travel to participate in exhibitions, my father-in-law and husband would take care of my son. I have succeeded because of their support,” expresses the senior artisan.

She has seen attitudes towards women artisans change

There was a time when male artisans didn’t take her seriously enough. However, when her first major exhibition at India International Trade Fair in Delhi in 2001 became an outright success, attitudes changed. “I managed to sell all my wares within four days. My entire stock was over. Those who were laughing at me were left speechless.”

Her skill and passion kept Salma in good stead. Salma remembers a particularly tough phase in life and credits her work for making through it.

Jaya Jaitly, Founder and President of Dastkari Haat Samiti, an NGO that works with artisans across the country, says, “There are different sections of the work where women participate but not very often they head like Noor Salma.

“There still aren’t too many women who have joined but they are certainly participating. When the crafts get marketed better, they get better design then there are more orders, women also join to fulfil them. You draw in women and increase production. I think when it’s the question of livelihood in most communities nowadays, they don’t really differentiate.”

When women decide something, nothing can stop them!

Out of 65 artisans, Salma works with, 19 are women. She says it is still not easy for women to step out of their homes for jobs. “In Muslim families, there are restrictions for women to go out to work so for those women, I send work to their homes. In any case, I don’t have that big a set-up. These women artisans have their machines and work out of their homes.”

Jaitly remembers how Salma became friends with a Kantha embroider from West Bengal during a fair organised by Dastkari Haat Samiti. When the former faced health challenges, Salma asked her to come to Channapatna.

Sharing the incident with me, Jaitly says, “She looked after her, helped with the treatment. The embroider lady got cured and went back. So Salma is someone who takes her own decisions. Frankly, when a woman decides to do something, nobody can stop her.”

About the author: In her two decades of experience with print and electronic media, Shailaja has focused on the world of art through her writings. Based in Bengaluru, India, she remains committed to the idea of bridging the gap between art and people.

In her two decades of experience with print and electronic media, Shailaja has focused on

To The Adults Who Shut Us Up: Here’s Why We Are The Sad Generation

Why Do Parents Act Only When They’ve Lost A Daughter To An Abusive Marriage?