How I Managed To De-Addict My Toddler From The Screens In 6 Easy Steps!

I committed the cardinal mommy sin and enabled my kid’s screen addiction. But I managed to de-addict her with these 6 steps!

I admit it: I committed the cardinal mommy sin. Yes, I enabled my child’s screen addiction. I lazy-parented, took the easy way out and ended up with an aggressive, zombie-like device junkie. And the last few weeks have been all about atonement for my sins.

My husband and I have been working from home for a large part and have been swamped with deadlines. Our daughter refused to let us type anything or even look into our laptops/desktops/phones. She would reach out to type on the laptop or snatch the phone and start screaming bloody murder if she didn’t have her way.

So, I gave in. I would furiously type on my laptop while she listlessly stared into my phone, watching her nursery rhymes on YouTube. From the moment she woke up, till she went to bed, she would persistently ask for my phone and shout and flail around until she got it in her hands. 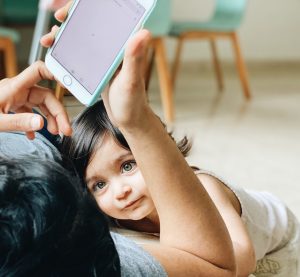 So, I came up with a plan, channeled my inner Magda Gerber and set up a “device rehab centre” at home.

Step 1: I stayed away from my devices

I had the nasty habit of reaching out for my phone the second I woke up, which my daughter started aping. That’s when I realised I was the problem.

I kept ALL my devices away from myself and out of her sight for 2 whole days (except when she was asleep, which is when I would get work done) On removal of the visual stimulus, she wasn’t reminded of its existence. And it wasn’t about “If you can, why can’t I?”

Step 2: I was one hundred percent WITH her

For these two days, I sat with her, read books to her when she wanted. I watched her play while sipping my coffee, sang to her at bedtime (instead of checking my Instagram mindlessly) and spoke to her while feeding her meals.

My daughter had two triggers: reaching out for my phone at the bedside table when she woke up. And screaming for a device as soon as I put her on her high chair for meals.

So I stopped placing my phone on the bedside table. I changed the location of her chair for a few days. Instead of at the dining table, I made it face the window, looking outside. It worked like a charm and very easily she adapted to the change in space, position and location.

Day three, I started leaving her alone at play, the way she used to (in her pre-device days) We’ve designed our home in a way that it is a safe space for her to play in and explore, so her safety wasn’t a major worry for me.

I would be in the kitchen with my laptop, working from there. So, within earshot but out of sight. First two days, she started following me and grabbing my ankles, wanting to play WITH me.

I would carry her for a bit, sit down with her among her toys. Once I saw she was busy with something, I would tell her I would be in the next room if she needed me. And then, leave her again. I kept doing this until finally, she started playing independently for extended periods of time.

I realised she needed to get used to seeing me working on my devices without asking for them. So, when I saw her exploring independently and enjoying her solitude again, I started placing myself in the corner of the room.

I could watch her from here, and be there if she needed but my device was kind of out of sight. She asked me a few times for the screen, I said “I’m sorry, but mommy needs to work now.” And she would crawl away and continue playing. Within a few days, she stopped asking me at all for the device.

Step 6: Enjoyed the fruits of my exercise

I can now work in the same room as her, without her belligerently asking to see my laptop. She does not even attempt to grab my phone anymore. And happily plays by herself for nearly an hour now.

When my husband and I watch Netflix, she is least interested and doesn’t shout until we switch to her nursery rhymes anymore. The lack of annoying ear worm like nursery rhymes is an added bonus.

I feel like I have oversimplified the process, but let me tell you we faced a lot of resistance from her. She would throw herself on the floor at times, scream, howl, cry and my husband (who is 6’1) couldn’t handle her during these tantrums.

You have to, have to, have to be strong. A child addicted to a screen is like a drug addict. So, when you take the screen away, the effects are quite like that of withdrawal symptoms. I noticed three things were critical for the success of this “de-addiction” process:

I cannot stress enough how important follow through is, not only in this case, but in general. If you say you’re going to do something or not do something, you have to stick to your word. Do not give in. Your child will then realise that you are serious about what you say and you keep your promises. They will keep pushing your limits, you have to stay firm.

One has to be patient because it is a slow process. There will be resistance, you will have to sit with your child multiple times for a long time until they’re feeling calm.

Remember, if they are addicted to the screen, it is our fault, not theirs. So, during the process of de-addiction, we have to be there for them when they need us.

Get them interested in clean, independent play again, before you just go cold-turkey on the screen-watching. Meal times won’t be easy. You will have to keep them engaged in different ways because screens raise the threshold for stimulation. And it would be a while before they start enjoying simpler, less stimulating activities and objects again.

My daughter refused to eat her meals the first two days but I did not relent. I still refused to show her the screen. She eventually woke up in the middle of the night, hungry and I fed her a glass of milk and banana which I had kept ready for this. When babies are hungry, they will eat. We have to be persistent and stick to our own policies. If we don’t respect our own boundaries, how will they?

I am so thrilled that our daughter has rediscovered the joys of exploration, discovery and independent play with simple toys again. It broke my heart to see her stare into the screen lifelessly.

I honestly doubt the above processes would work for an older child, but follow-through, patience and persistence can win any battle. You can read more about my parenting wins and fails here.

Picture credits: In article images – Provided by the author 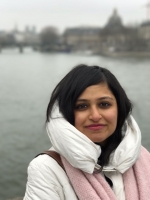 I'm a dentist, blogger, new mother and I am on a mission to raise

Was It Really An Empty Nest? [#ShortStory]