In January, during one of those holiday planning sessions for the year with the family – sitting around the dining table I said – “we should go to Kenya again before the yellow fever vaccine from our last trip expires”! Here we are – onto 4th month of lockdown – reminiscing over our top-notch holidays and not-so-memorable ones. Our Kenya visit was way up in the ranking. I started asking a question and bit my tongue – will the wildebeest migration happen this year? I mean, how haughty of me right?

Then it struck me – In a normal year we would have searched Google and the travel planning sites high and dry for tourist attractions and not-to-miss experiences in July and August.   Some of the man-made experiences have shut down / wound down – Disneyland closing its doors in some cities, cirque du Soleil filing bankruptcy – because these attractions need one key ingredient to function: Patrons, fans, travelers and tourists.  I couldn’t help but wonder if it is nature’s way of putting us in our place – countless phenomenon that we have smugly labelled “tourist attractions” will continue to happen with or without the tourists.  Northern lights will put up a show whether you make it there or not; wildebeests and zebras will migrate between Tanzania and Kenya whether you check-in to the resort in Masai Mara or not! Niagara will fall with a roar with or without the gaudy fireworks over the waters ! We are insignificant!

The migration of our own kind

It made my heart ache even more, thinking of  the other “migration” – that continues to happen in the 2nd wave of lockdown – of hundreds of thousands of our own kind : men , women and children from urban lands heading back home. No less of a survival struggle this compared to the wildebeests migrating ; no less fraught with risks and death traps ; Just think – We go to Tanzania and Kenya in thousands during July-August in our safari khakis ; cool eyewear and hats intact ; sporting our newly bought binoculars to “watch” these animals make a crossing across wilderness to find a living; We even have created a tracker for the path they will take and best places to stay in these routes!  We ask the guide with no sensitivity – “Can we go to a spot where we can see a large herd migrating? Maybe near the river to see them jump into the Mara river?” Imagine a busload of tourists standing at vantage points on the path with cameras when a family is marching towards a place where food is available and is safe to keep the family !

I do not know when I can visit Kenya again – but I vow to myself I will watch in silence and in respect – to learn a lesson and to say “We are no different pal!  Reach safe with your young ones wherever you are headed” .  I will be mindful that I am watching another species’ biggest life struggle and not a spectacle;

For now, I console myself with a ride down memory lane of a time few years back in Kenya, to witness the Great Migration and to experience the Safari heaven that is Masai Mara. Hop on, join us on our 4×4 vehicle?

In awe with nature

The savannah presents a perfect canvas for the show – stretched beyond the horizon interrupted only by the shrubs of Acacia. Mostly dry land, while some pastures are still green, feeding a large herd of wildebeests that have come in search of food in their annual cyclical pilgrimage from Serengeti, Tanzania to Masai Mara, Kenya.  We visited in September and the Wildebeests were starting their return journey.  Our guide could tell the group that is migrating back to Tanzania from the group that is local to Masai Mara from the way they were eating the grass! Heads-down, focused on the job at hand: Survival.  They have braved crossing the Mara river into Masai Mara escaping the clutches of the hungry crocodiles.  It is now a matter of getting back home safely only to return next year – every year!

“A game drive is like fishing, you never know till the end what comes out, you never know!”.  We nodded in silent agreement to the wise words from Fred, our driver-guide for the Kenyan safari holiday.  We were driving away after watching a sleeping leopard perched on a tree digesting a heavy meal.  It was an almost meditative, relaxed posture that rubbed off on us as we stood for 15 minutes in silence on the seats of our open top safari van. It took some squinting at first and getting-used to before we could spot the graceful animal well-camouflaged amidst the dense foliage.  It was indeed like fishing, only to catch a glimpse of another type of inhabitants, another lifestyle and another unfamiliar world in a deceptively safe sprawl of savannah.

“You are lucky” – Fred turned back and grinned at us with a glint in his eyes – “You have seen a leopard in the first 30 mins of the drive. I am a happy man; I am confident you will see the Big 5 in no time. Leopards are elusive, you see”. Bless his words – we had what you can call a wildlife-lottery, we saw all the Big Five (Lions, Buffalos, Cheetah, Leopard, Rhino) in Masai Mara!  The savannah decided to be kind to us, we had an enviable list of sightings!  a pack of four lions sleeping in a row in the shades of a tree -one of them woke up, yawned and took up a menacing pose, glancing at us.  another pride of six lions lounging about, pacing up and down in the open; a cheetah resting in the shade surveying the savannah for any unsuspecting prey.

Even before we entered our resort, nestled in the midst of the Masai Mara Game Reserve, we started squeaking and squealing in delight seeing the herds of migrating wildebeests, zebras grazing on the green savannah, sashaying giraffes galloping across the road in front of our van, a group of breeding impalas – about 20 females chasing a male impala! The elevation from a wide-eyed tourist to a safari-addict is a gradual but sure transformation at the Masai Mara.

At the start of the safari , you jump up in the van seat at the first sight of hundreds of zebras. Then you lose count of the number of animal species you see as the scribbled list in your hand grows longer.  You wave a knowing hand at a big herd of elephants at a waterhole and drive by after a cursory photograph. You spot a group of hyenas and jackals by their silhouettes from far away much before your guide – but there is still a longing. Now only the big cats set your pulse racing. You are greedy to spot another pride of lions. Or of a cheetah or perhaps a leopard crossing your path.  Your guide is reeling out how a lion sleeps for 20 hours a day and searches for food in the remaining time; how the shout of an estranged elephant can reach beyond 15 kilometers. You are listening but your senses are heightened and alive, eyes darting left and right; a slightest rustle makes you scan the nearby bush; your guide suddenly falls silent. He scans the savannah and whispers ‘I can hear a lion; it is not coming out for me to see’. He slows down and turns of the engine with alert eyes watching on both sides of the van; the sedate babble of the other guides in Swahili on the UHF radio suddenly turns into a lively chatter, your guide pulls his mouthpiece and has a rapid conversation as he swerves into a winding path; two other vans are converging from afar to a point where another is parked at a reverential distance. Before your guide can raise a pointing hand, you ‘spot them’ – A mature lioness with her 4 cubs. The cubs are rolling around and playing around her.   The mother shoots a periodic glance warily at the cubs and enjoys the afternoon rest.  It is such an adorable sight it is hard not to get down and pet them!  And then you know, you are hooked to this adrenalin rush; Congratulations – you will never set foot in a zoo again!

The Animal orphanage managed by the William Holden foundation at Mt Kenya has a noble objective of preserving and reintroducing endangered species into the Kenya wildlife.  The chimpanzee sanctuary at Ol Pajeta was established to provide life-long refuge to orphaned chimps rescued from civil-war laden African countries such as Burundi and Kigali. Chimps are abused in these regions for illegal bush meat and for the whims of those who want them as exotic pets.  I choked in disbelief when the guide said “Chimps are like us; they fiercely guard their young ones.  To supply a small chimp as a pet to a potential buyer, an entire family has to be killed first”.

To me, the most precious safari moment was at Amboseli National park – a herd of about 30 elephants led by a jumbo elephant with magnificent tusks and five or six baby elephants in tow – undoubtedly Amboseli is the land of the elephants.   At Lake Nakuru,  we expected to see hundreds and thousands of pink flamingoes that inhabit the saline waters – only a few hundreds were there, still it looked like hundreds of lotuses have bloomed at once on the water surface.  The flamingoes had taken off on their migratory path to Lake Bagoria for the breeding season.  “They have gone earlier than usual”, Fred said sadly.  “looks like you have used up all your luck in Masai Mara”.  “Hakuna Matata”. We laughed and replied “No Problem” – the popular Swahili phrase.

While we were driving back to the Nairobi airport, we saw a young giraffe ambling along from the forests on the sides of the expressway.  The sight was so out of place. The giraffe stood watching another kind of wilderness – the automobiles zipping by.  The thought of how it would have wandered away from its group kept me awake for a few nights.  My daughter asked me after a week – “Someone would have taken the giraffe back home, no Amma?”  “I hope so” I said fervently, “I really hope so”! 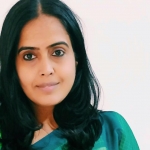 Is A Kenyan Safari With Kids Doable? Hell, Yes!

Celebrating The ‘We’ In V-Day