The closing lines of ‘Reply 1988’ Korean drama series resonates all the feelings of yearning for their youth for many, especially those born in the sixties and seventies. The show is the last or the latest of a trilogy produced by South Korea’s tvN network. It has recently been added on Netflix India in January 2020.

The show, though in Korean, cuts across all barriers and one feels as though transported to a small lane of a humble colony of any Indian city. The characters are all relatable, as though they are a part of your life. Although the show had a presence of morality it never became preachy.

A welcome change from intense thriller driven entertainment, the show comes as a whiff of fresh breeze laden with the perfume of long forgotten youth.

The snappy droll humour carries strongly through the subtitles. There are no dramatic deaths, scenes of infidelity or fixed villains. The 35 hour long story, covering the lives of sixteen characters spanning twenty episodes takes us through the lives of five childhood friends and their families. They live in the neighbourhood of Ssangmun-dong in Seoul.

Set in the year 1988, a very significant year for Seoul, when the summer Olympics brought the attention of the world to the developing city. The year also represents influx of culture from around the globe to a nation stepping out of years of dictatorship, conservatism, poverty and protests. A number of real events have been woven into the plot.

After the successes of the two previous ‘Reply’ shows, the producer was not very sure of the demand for a third one. He however felt as per his memory that Korea in 1988 had warmth and affection in interpersonal relations. This show turned out to be the fourth highest rated Korean drama in cable tv history.

The story is relatable, poignant, heart-warming, makes you feel nostalgic for the golden years of youth while you laugh and cry with the cast. There are innumerable moments when you are left with a heavy aching throat due to unshed tears.

The main protagonist is an underachieving teenager Deok Seon, the only girl in a group of five friends who breezes through her teenage crushes, her trials and failures. She is kindhearted and highly likable, but unambitious and clueless about what she wants to do with her life. Interwoven throughout are interviews of a grown up Deok Seon in her forties.

The highlights of the show are the various characters with their quirks be it the childish and naughty Dong Ryong, Sun Woo, the mature and understanding son of a single mother, Jung Hwan who secretly loves Deok but is unable to confess the same, Taek the Go game champion who is in and out of their lane, playing unending championships, Jung Bong, who loves cooking, a heart patient, unselfishly always thinking about his younger sibling.

The seamless way the story goes back and forth relating stories of each family makes the show a delight to watch.

There are no stereotypical women-Bora, Deok’s elder sibling is aggressive and scholarly, whom even the elders find scary. Sun woo who is three years younger than her is brave enough to fall in love with her. The skirmishes between the sisters and the physical blows they come to is very relatable and comical to our Indian sensibilities.

The friendship between the three women, the mothers of Deok, Sun Woo and Jung Hwan and their time spent together sharing their life’s hardships, while productively chopping away vegetables or peeling garlic together, takes you to the small gullies of Indian cities/towns where you can still see women huddled together gossiping while getting their household chores done at the same time. The beautiful bonding of the three women and their support for each other, be it Mi-Ran’s menopause, Il Hwa’s lump in her breast or Sun Young the single mother’s struggles was heart-warming. Through all the adversities they found reasons to laugh and be happy, and make you laugh too with their wit.

The most touching scenes are when the children of the Sung family present their father with a thank you plaque. Bora and her dad’s letter to each other on the day of her wedding as both have a similar temperament and find it difficult to express their feelings face to face.

One very endearing point of similarity was how they addressed their mother and father as Amma and Appa, which is prevalent in Tamil Nadu, India as well. Their stress on academics also highlighted the similarity to Indian culture.

Till the last episode the mystery was who ended up as Deok’s husband. It will be a spoiler if I reveal it now, so I guess you should watch it to find out.

Deok sums it up in the end, when she says the song on Youth is much more meaningful to her now than when she was young. We never realize the importance of youth when we have it. What she misses most about the past is her youth and her parents when they were younger.

All in all, a must watch to all those who want to relive their youth. 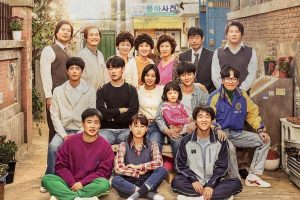 An ex banker,proud mother of two very supportive kids who happen to be my

Watch These 6 Women Centric Korean Dramas On A Wave Of Popularity Now!