The merciless roast of Netflix’s Indian Match Making (IMM) is coming from left, right and centre.

That it normalises patriarchal, casteist and misogynist attitudes of people while looking for a suitable match, is an obvious reaction to the show and one doesn’t necessarily need to be ‘woke’ in making that observation. At the same time, it is so addictively cringe worthy that one cannot stop at just one episode.

The lead subjects, Aparna, Nadia, Akshay, Vyasar and others are also on their way to becoming hilarious meme templates. One wonders how a streaming platform which gave place to some of the most novel, fresh and progressive content in the recent time could produce a show which is unbelievably wrong is so many ways. Is Netflix not keeping up with modernity? Or does it just want to make money independent of its social responsibility? Why would it then also hire popular stand up comedians and social media influencers to make official roasts of the very same show?

Has it evolved in reverse from making a solidarity post for Black Lives Matter some months ago to producing ‘Indian/NRI boomer fantasy’ content like IMM where people are openly colourists and body shamers?

All these questions continue to occupy the internet space while there could be something denser and larger about this show which is also problematic but is being missed out on. Aware or not, the creators of the show further strengthen certain anti-women notions in a creatively subtle way and at subconscious levels. In my opinion, the show creates a new stereotypical gender binary between the ‘sorted but unlucky in love man’ and the ‘too fussy, outspoken, choosy woman’. This theme can be carefully observed in the show through the choice of its subjects.

The men are differentiated only through class or their economic status where Akshay and Pradhyman come from affluent business families while Vyasar kind of represents the NRI middle class. The women on the other hand, have been shown to be of a ‘variety’ united by one common trait, and that is “being difficult”. There is a lawyer from Houston who comes across as a picky candidate in matrimony, has an unambiguous check list for a desirable partner and outspokenly expresses her demands. However, the central subject of the show, the matchmaker, finds her hard, inflexible, negative and too demanding.

Now, as the format of the show is something in between a documentary and a reality show, we see a focus on certain personal family details of the subjects which clearly the makers have taken a liberty in showing, in order to set a narrative. For instance, at one place Aparna’s mother starts sharing about her past, divorce and her reasons as to why she wants the best for her daughter.

Instead of making the audience sympathise with her past where she was forced into marriage at an early age, the optics created here are similar to where one finds the mother-daughter duo negatively individualistic, choosy and hard on the male suitable matches. The match maker’s statements like “Every time I think of Aparna, I feel tired” or “the guy will have to satisfy both mother and daughter” just confirm the anti -women gaze of the show as well. She kind of takes a dig at Aparna for having more than 30 pairs of shoes, which she by the way bought out of her hard earned money, but is delighted and starstruck by Pradhyman’s king size closet!

The matchmaker, while being the common character, is also the narrator who is documenting the other subjects and so of course, her statements and opinions do not come as irrelevant. Another candidate is Nadia from New Jersey, who is comparatively likeable, jolly and optimistic. However, she is of Guyanese Indian origin and hence is also a ‘tough job’ for the match maker.

Two other female candidates are a successful online businesswoman from Delhi and a divorced NRI woman with a child. The former’s story touches upon the bodily aspects like her weight and colour, while the latter one’s has nothing new to offer except the fact that she has been married before and a candidate looking for a remarriage is again, a “task” for the poor matchmaker.

So basically, all four women are independent, beautiful and eligible. In any case, the show doesn’t want you to believe otherwise. But the eligibility of these women is complicated, makes people in the room uneasy, makes finding love for themselves a bit difficult and suggests to us that they need counselling! Meanwhile, the only problem with the male candidates here is “hard luck”. The women that Pradhyuman and Akshay finally end up with represent a certain type – tall, fair, attractive and easily compatible matches. But we don’t get to see their background life, not at least in this season.

The makers of the show want the audience to know that in the modern times, trouble makers are usually women and that the institution of marriage is only dependent on how far women preserve its sanctity by not being “complicated”. The show tries to, but miserably fails at giving the narration an intellectual sense that the practice of marriage is changing and the only evidence to prove this hypothesis presented is the over fragmentation of the woman kind or variations of the women’s identity. All this, while placing near to no accountability on men for making the process of finding love a failing endeavour in the modern age.

Well, yes, we do see a man ghosting Nadia after numerous happy dates and a divorced man posing as a single match to Ankita, but we hardly hear the matchmaker or anyone else crying about it. In a given picture like this, constant reminders like “the woman has to be flexible” or “the woman must compromise or she won’t find love” on the show, the viewer’s subconscious thought does lead her to think like “Hah! maybe I should simplify myself down?” “Maybe I don’t wanna sound like Aparna” or “If someone as charming as Nadia could get stood up, what chances do I have?”.

This, I believe, is one of the gaslighting effects that the show makers leave on their audience, especially women, irrespective of whether they watched it out of boredom, curiosity or for a plain cringe-worthy voyeuristic take on the lives of people they might never meet.

By presenting the different kinds of women with different personalities, we are told that women are the sole problem in the otherwise simple and easy job of finding a suitable partner. Instead of taking a probable opportunity to progressively show how women are not a ‘homogenous category’ but with a variety of needs, they instil the idea in a regressive way and show women as utterly hard to understand. It requires a different rant altogether on how heteronormative the makers have been in choosing their subjects.

The outright demands of the society to women and in IMM as well for perfect body, perfect skin colour, positive and submissive attitude etc. has already have us women believing that it’s better to compromise while finding love. But where the show goes an extra mile in placing it our psyches is  that the modern woman’s love game is going to be even tougher. It is near to impossible if you have walked out of the marriage and have become a divorcee. Unattractive women might have to bear the brunt of being cheated or conned. So, woman, mellow it a bit down, they say!

As sociologist Alain Badiou recognises, “Love is an honourable human relationship.” His further reflections describe love as a process of seeking truth and also revolutionising oneself. Unfortunately, the modern tendency, according to him, is of giving it up at the very first instance of love being “too hard” or “too difficult”. But love is a work of creation. If we read him in the context of IMM, we are able to counter the regressive attitude of treating women as dispensable matches if they are found to be too headstrong, different and “inflexible” towards the market’s demand.

This could also explain why women are immediately given up on if they do not meet the so-called sorted men’s criteria. This also counters the subtle premises or tricky gaslighting of the IMM makers. Perhaps, it could come as a relief if one watches IMM after having read some sociology of love!
No matter how binge worthy, it is still unhealthy to watch Indian Match Making. 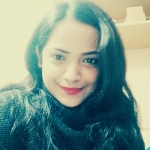 PH.D. in International Law, Feminist, Academician. A passionate foodie with no stomach for being mansplained. read more...