The deafening silence around women’s undergarments is creating more problems than just the shame.

At 21, I married an Indian Army Captain. The Captain was then posted in Uri, J&K and the second phase of my bras started, the unhygienic journey of my undergarments. The first one was related to being starved of bras. Reason of course “Shhh…”
When I was a teen, I found it very difficult to get my first bra. While the nuns in school found me big enough for bras, my mother never paid attention. Maybe she was tired of raising my three elder siblings. At 48, she was searching for her soul and I was desperately looking for my first bra.
Yes, my father was also there and so were my two elder brothers. But they were certainly not raised to even talk about bras. That is how we raise our kids – eager to push our boys to hold the content and shy away from the container.
My mousy effort to get a bra continued. And then we were given farewell from school in our tenth grade. The dress code was Sari. That was the time when someone at home realized that I needed a bra. My saviour was my sister who happened to be nine years elder to me but never realized I am entering adolescence. “Shhh…”

My elder sister shared her bra so that I could put on a blouse for the school farewell. At twenty eight, I was happy with size thirty four. Fortunately, after my tenth grade I was on my own! Starved of bras, I got into this habit of overstuffing my closet. I took advantage of being in a girls’ hostel of a girls’ college to overcome inhibitions attached to bras.

But oh well – little did I know that after marriage, my bras will seldom see sunlight. Uri was all boys station. Only few ladies were permitted for short durations. The problem was drying of undies. I didn’t want to scandalise women deprived men with my bras. So again. “Shhh…”
My husband’s clothes were going to the washer man. My clothes were also going to the washer man less MY undies. But all wasn’t lost, I received undies drying suggestions:
“Put them out and cover them with towel.”
“Put them in washroom towel rack.”
And the most conservative being:
“Put them on washroom towel rack and cover them with towel.”
I followed none. As it is my undies were feeling lonely without my husband’s. My first few days at my in-law’s place had pleasantly seen my new man contributing to all the daily chores. When I was struggling with our breakfast, he was taking care of our clothes. First day, just as he started putting undies under the sun, my mother in law rushed to shut the main gate. Unhappily, she came back and rattled off, “It’s fine that you are washing your wife’s undies but at least close the door while spreading them” And again. “Shhh…”
With heavy heart, bidding adieu to my beautiful memories, I dried my bras in front of fan room heater and tried to be happy. If only all the sons like my husband had helped their mothers in their daily chores, my undies would have seen the light of the day instead of the threat of the bacteria.
After ten long years of wait, finally my undies found a friend. One fine morning, I saw his briefs coming back from clothes washing area. Men in uniform had suddenly discovered that for personal health, briefs should be washed at home.

Empathetically, I raised my two children. Once, while unpacking my daughter’s bag I shouted “Gudiya I am not getting your bras” and she………. 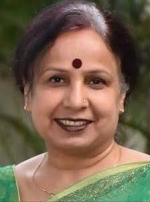 Bras And Panties Are Essentials Of Women’s Clothing. What The Taboo!

How Arpita Ganesh Broke The Funding Barrier For Her Lingerie Business