A Locket For Anita

“For months I had been religious in my routine–never tired of going back and forth just to have a glimpse of her.”

For fifty-six years I loved her, My Anita, your grandmother. This I am going to tell you and promise me that you will tell this to your grandchildren too. I met your grandmother when she worked as a servant girl in the bakery beside the cathedral. She started working there a month after she ran away from home. All I know is that she was an orphan raised by her abusive stepmother– a typical fairytale in the making if you would ask me. A simple pale skinny maiden yet she was the loveliest in my eyes. I would buy bread in the morning for breakfast, bread for snacks, bread at noon, and another piece of bread for dinner. At night, I would stay awake excited for the dawn to come so that I could buy bread again.

I knew she liked me because she wore that same sweet smile everytime I came buying. For months I had been religious in my routine–never tired of going back and forth just to have a glimpse of her. When the war broke, I had to leave. So I decided to confess my love for her which she accepted. As a sign of my devotion, I gave her this gold locket that I’ve worked hard for. Honestly, I wasn’t hopeful that I would ever return but I told her to wait for me so we could both have our photos taken for the locket. Four years have passed and I returned home as a man. I went to the bakery but I didn’t find her. The owner said she went back to her hometown the day I went to war. Without waiting for another day, I set forth to find her. My dire heart has longed enough for her and I wouldn’t waste another day without her by my side. When I came near to the wooden gate, I saw Anita from a far as lovely as ever. My Anita, wearing the necklace I gave her. When our eyes met, my heart raced! I ran to her and hugged her really tight.

It took her a while before she put her arms around me and hugged me even tighter so tight that it seemed as if she never would want to let go. Just three days after, I asked her to marry me which she happily agreed to. My Anita… My Anita… Your grandmother died not knowing who I was to her. Her last words were “Anita, Victor, Anita, Anita, Victor” and I said, “Yes my darling, I am here.” She peacefully passed away holding this locket which she cherished with all her heart.

A month after the funeral, while I was on the porch holding this locket, I could imagine my beautiful Anita dancing, prancing, and laughing under our favorite tree. This locket was old but it still glimmers. When I opened it, I saw my picture which was taken after the war. On the other half, a picture of two girls who looked exactly the same. 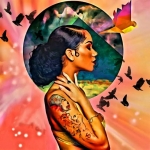 Only If I’ve Actually HAD A Life