The Person Who Defined ‘Love’

Its rare to see an open display of a father’s affection and trickier still to understand his love.

“What is the most precious memory you have of me?”, I ask my dad. My dad is kinda of those people who avoid speaking about their feelings, like some people avoid karela. If it were up to him, he would answer with a “hmm” to every question ever asked about ‘how do you feel?.’ So, I was curious now and I asked.

I watch him squirm, trying to figure out a way to avoid this conversation and get rid of the little pest that keeps bothering him. I give him the look, the one which says, ‘Tell me or I won’t stop annoying you.’ He looks at my mom, begging her to save him, but instead she encourages him to tell us.

Reluctantly, like he is about to chew something distasteful, he says, “You were 7, um… maybe 8 years old when you came rushing to me, holding a certificate in your hand. And you told me that you won second prize in the Elocution competition. You were so happy, because you won that day, and I said, ‘It’s not first prize, so it doesn’t matter.’ You cried, when I didn’t praise you, as you’d expected.”

I remember that day vaguely. I remember crying because my dad didn’t care about me. My mom consoled me, telling me that I did good. But I needed that approval from him, I wanted to make him proud.

The power of his approval

I look at my dad now, and he has this sweet smile playing on his lips, so I ask, “Were you not proud of me?” He looks at me, and says, “I was. I’ve always been proud of you. But, I needed you to work on yourself. If I had accepted and praised you that day, you would have been content with your achievement, and wouldn’t have worked harder to win the first prize next year” and it sort of makes sense to me.

Every time I think I have done good, he tells me to better myself. Countless times, he watched me fall and scratch my knees while teaching me to ride a bicycle, but only a handful of times did he pick me up saying ‘fall seven times, get up eight.’ Whenever I scored less, and gave excuses as to why my marks dropped so low, he would say, ‘Losers give excuses, winners prove themselves’. It’s been my mantra, for so many years, this is what I kept telling myself whenever I failed.

What was never missing

At this point, my mom chimes in, “Who do you think laminated all of your certificates?” Before I could say anything, she says, “It was your dad.” I always thought that mom was the one laminating and arranging them in my folder, but all these years, it was dad. I look at him, and he looks uncomfortable, with three women interrogating him, all he wants is for this absurd and out of the blue conversation to end.

I take pity on him, but then I mull over everything he has ever done and I had no clue. I know, he never speaks about his feelings but he expresses them, in his own way. I realize one thing now, actions speak louder than words. He is the man, who defined the word ‘love’, taught me patience, understanding and the true meaning of loving someone. 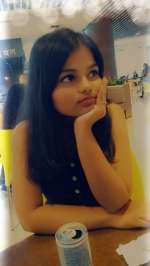 Quirky, and often in my own headspace. I see world with my own version of

“What Can You Do About This, Bitch?” Was The Look On My Molester’s Face

Gently & Effortlessly, My Dad Brought About Big Changes In My Life!