My Detective Daddy ( An Ode To Dad)

“What’s wrong with him?”

“He …He…he is regular in college. Yesterday the Principal called. Rishi has been bunking classes. I did not ask him anything… Instead I followed him.”

“Good! So what did you discover?”

“I..I…saw him entering a café. Soon a girl joined him. There they sat for two hours. They then went to the park. Sat there for long…hands intertwined. He…he even kissed her!”

“Don’t you have anything to say?”

“Yes Rani, a lot! How does the girl look like?”

“How does it matter?”

“It does. I need to know my grandson’s choice. Next time you follow, stay put at a good angle…you know from where you can get a good look at the girl!”

Baba lets out a chuckle.

“Raani do you remember when you were in college? How punctual you were…You never needed anyone to wake you up? You would be up early and dash away! You never missed your classes.”

“And that extra set of clothes you carried? I did not miss the twinkle in your eyes or the way you lit up when you left home…”

“Bbbabaaaa …How did you know?”

“Well, I do know my little girl. One day, I followed you! Reached Victoria Memorial and sat behind you drinking lassi. Then I watched the movie that you both saw, munching chips. Well, it was quite an exciting day!”

“Yeah…I knew you would come and tell me some day. I was patient. Meanwhile I did some research on the boy you were dating.  We have always been close, Rani!”

“But you looked surprised when I broke the news to you…”

“I pretended. I was waiting for you to share.”

“Hey…that’s Okay! Tell me…do you have the same equation with Rishi? He should feel comfortable enough to share it with you. Build that equation. I learnt it from my own experience. Give them space. Watch them grow and be there for them. It will all fall in place. Meanwhile get a good look at that girl and get me a picture from your cell phone. I think I need to give you some tips on being a sleuth.” 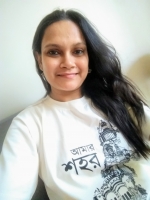 Dad, Why Do You Say I Am ‘Lucky’ To Find A Good Husband?

My Worth, My Measure [#ShortStory]