When Poetry Played The Cupid

She loved poetry like someone who's been the reason of her existence while he loved her like she was his poem.

She loved poetry like someone who’s been the reason of her existence while he loved her like she was his poem.

Yasir was Noori’s family friend. They had a very formal friendship until Yasir read some of her poems. Her imagination mesmerised him. He started fabricating stories to his parents in order to visit Noori often. In the 1960’s a woman’s creativity in the fields other than the household chores held no importance. When Noori saw that Yasir was taking interest in her work, it encouraged her. She tried to write more and more. Yasir turned out to be the motivation she had been looking for. One day she wrote a piece that made Yasir do something more than just reading her poems. The poem was:

O the admirers of women,

Look into their souls,

They are deeper than your desires,

And prettier than faces.

Yasir felt the hint she was trying to give. Her work needed to be exposed to the world. But in those times she couldn’t make it to the poetry recitation events. He was in a dilemma. He wanted to help her but how he could do it was the question. He gathered information about such events happening in the town and decided to recite her work on her behalf. But somewhere he was not sure if Noori would agree to it. Luckily Noori’s family organised a dinner for family friends on the occasion of Eid. Yasir tried to talk to her in peace but she was too occupied with the household chores that he couldn’t make it. After dinner when everyone was busy in chit chats, Yasir told everyone that she writes. He wanted everyone to be her audience. She was happy and nervous at the same time. She started reciting:

“When moon pops up on the sky,

I use it as lantern to look for you

when everyone is fast asleep,

I tip toe to your room,

to take a glimpse of your smiling face…

Her father Jamshed stopped her, embarrassed at such poem talking openly about a woman’s desires. May be he imagined what could be in the next stanza. While Yasir seemed to be lost somewhere in between those lines. Her face reflected fear when she looked at Jamshed. Jamshed tried to divert guests’ minds when they were looking in awe at Noori. He offered everyone some sweet dish and tried discussing politics. All the guests left after some time.

Next day, Yasir asked his mother Shahana to make kheer because he wanted to give it to Noori’s family as a return gift for the dinner. But the truth was that he wanted to meet her, to know what happened after that. When he reached her house, she didn’t come out of her room. And didn’t have the courage to go inside it. He kept waiting and returned home. After a few days he again visited her. Fortunately, she was sitting in her verandah, partially lost in thoughts. Her face had signs of sadness. Yasir sat a safe distance and tried to initiate the conversation. “I am curious to read the complete poem”, he insisted. “I myself don’t remember”, replied Noori. Yasir asked, “Why what happened?” “My father read all that I wrote so far and took it very personally”, replied Noori. “Did he scold you then?” asked Yasir. “No. He just asked me to keep my desires confined to those pages only and never utter them in front of anyone”, said Noori. Yasir sighed. Then after a pause he asked, “What if I read it on your behalf in front of people other than our family friends and relatives?” Noori looked at Yasir. “I mean I can read those in poetry recitation events and give you the feedback”, he said. Noori thought about it for a minute and agreed.

Yasir started reciting her work and appreciations were showered on her. Some sent letters praising her work and few sent gifts. This encouraged her to write more. While Yasir was happy being a helping hand to keep her passion alive.

In the process of exchanging poems, they fell in love. Another problem popped up because they belonged to different castes. Their love was on the peak so were the obstacles in their relationship. Jamshed sensed something and fixed Noori’s marriage to a rich zamindar. Yasir couldn’t match that Zamindar’s status. He had a simple job of an editor in an urdu newspaper. Noori couldn’t resist Jamshed’s decision when Yasir gave up so easily. Their relationship died but he remained alive in her poems. While Yasir lived in regret all his life. 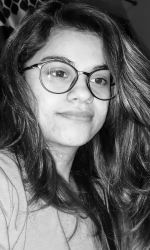 Syeda Hidayat Fatima is a graduate in English Literature. Reading and writing are a pivotal part of her life. Her keen observation has led to many beautiful creations. Her work has been published in both read more...

It Is Not Love If You Have To Beg For It.