“Utho Beti Vasundhara”(Rise, dear daughter) she heard someone whisper in her ears with a soft and gentle voice. “Vasundhara your days of misery shall cease.”

Vasundhara sat bruised and bleeding on the floor, under the daunting grey skies. Her hair was dry, wispy and in shambles. She looked pale, sick and terribly frail. Tattered and battered she was living in pain; her every breath, laboured. The air around her was stifling, laden with fumes and smoke. She held her face in hands, her sobs wracking her slight frame. Her lips had turned blue with blood seeping through the cracks of once rosy lips.

She lay neglected, her surroundings ravaging her soul. A bunch of youngsters were partying and dancing, their heavy metal music raging out of their speakers. Cans and bottles were strewn all over the area with the foul and rancid odour of carrion and spilt food invading upon one’s every breath. No one heard her weeping and her soft pleas to stop. Living amidst the roaring of vehicles, the humming of jets and aeroplanes. She was entrapped in the wild human hysteria, the reality of being shackled by her own children their misdeeds hitting hard.

Tortured in all possible ways, Lady Vasundhara felt her charm and glory slipping through her fingers. The flora and fauna around her looked miserable and wilted. As the temperature of her surroundings soared, small critters came running towards her for water and her soothing, gentle strokes of love. Vasundhara Maa (mother), they called, “Save us! Do something!” Feeling helpless, a victim of the horrendous and unlawful selfish behaviour of human beings, she again felt tears welling up in her eyes. Sobbing in despair, she prayed to The Almighty to pull her and her dear ones out of their miseries, awaiting a miracle. Aghast! Her vision got blurred, and she fell into a swoon, her unconscious body hitting the ground.

“Utho Beti Vasundhara”(Rise, dear daughter) she heard someone whisper in her ears with a soft and gentle voice. “Vasundhara your days of misery shall cease. You are the bearer of this world of men and creatures galore. You have borne the weight of its doings through the ages of time. You have seen horror and glory, victory and defeat, the fall of empires and the bloom of civilizations. You have both nurtured and slain those who walk upon your bosom. Soon you will be fortunate enough to regain your space. Flora and fauna around you will heal and you will be set free. I am always with you. Forgive the sufferings of ages past. Sinners will repay for their crimes.” Upon hearing the voice, she was befuddled and taken aback. Suddenly her eyes fluttered open. Perplexed, she looked around, trying to find the source of the voice. It was a beautiful dream. Beautiful beyond measure. Granted to her after what seemed like ages. She longed for it to come true. A pleasant fantasy after centuries that carried her grief away for a moment.

All of a sudden, in the horizon, Vasundhara saw the skies darkening. A dreadful darkness was creeping upon her. Whirling forward with immense strength, a black gust of wind blew forth, sweeping the whole earth beneath it. People couldn’t digest what was happening. They started running, helter-skelter, unable to breathe properly. Terrified to see such an eclipse drawing close upon them. Dread gripped people all over the world. There was panic ensuing amongst the masses. Sirens of ambulances echoed on the roads, people flocked to hospitals in thousands, donning masks. Humans were falling sick to an unknown disease. A pandemic had broken out and was steadily spreading its tentacles, killing humans. Vasundhara was shocked and dismayed. She couldn’t grasp what was happening around her.

Doctors worldwide claimed that the virus was immensely contagious and the disease was spreading amongst humans. Seeing the severity of the situation, lockdowns were imposed in cities and countries around the world. The biggest and busiest cities worldwide came to a standstill. Institutions, schools, colleges, malls and public places were shut. Human movement was restricted and the most egoistic and arrogant beings on the earth were caged in their own homes. Suddenly, in a matter of a few weeks, the lives of human beings changed completely. They were fighting an unknown and invisible enemy. Deadlier than a gun, steadily torturing and squeezing the breath out of their lungs.

People suffered, while nature prospered. The sun shone brighter and beamed with joy. Birds chirped merrily with fewer aeroplanes hurtling through the skies. They sang to the earth and heavens, of the days of freedom, happiness and liberty. Vasundhara smiled, realizing what had happened. Nature had planned something very resolute and firm to give humans a lesson. Happiness danced in her way, with no more thought of all the misery, but of the beauty that still remained. No more did the screeching of tyres and the roaring of engines overwhelm the sounds of creation. Nature was regaining control. Harmony was thriving once again. Animals strolled with pride, on roads and jungles alike. Oceans and rivers cleansed themselves of the debris collected upon their sweeping gowns of turquoise. Light and peace, woven into the strands of water.

Vasundhara; the Mother Earth, was happy and pleased. Her dream, after all, had come true. She bowed in gratitude to The One Above. The trees were in full bloom, laden with fruits and virgin leaves. Dolphins danced gleefully on the rocking lullaby of cascading waves. Turtles returned to the sea-shore. The earth was recuperating and rejuvenating, with reduced noise and air pollution. The ozone layer above was healing. Though she pitied humans, their self-centric attitude was being addressed by God. She believed if Man could learn the essential lesson of co-existing without hurting the rest of creation, the world would be complete and beautiful. For humans are her children as well.

I am a blogger, a bilingual writer, and a mother. I love to write poems and stories inspired by nature and the world around me. My several poems have been published in national and international anthologies. Which are available on Amazon, Bookemon and Lulu. Recently my poems in Hindi and English found its place in an anthology book by Asian Literary Society along with several other eminent poets. 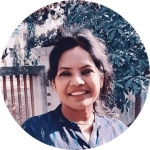 I am a bilingual writer and blogger. My works have been part of several international