Lolita had always remembered living in the ramshackle slum house in Koliwada, Mumbai.

She had grown accustomed to the creaky sound of the only discoloured fan in her house. The cracks and apertures on its low-ceilinged roof did not cause much trouble, except during the rainy months of July and August.

A Sangria hued chiffon dupatta hung at the entrance in place of a door and every morning, she woke up to the plaguing smell of feces and garbage.

With only a finger’s distance between each kohli in the area, sunlight was an occasional luxury. The flickering CFL was the only source of light in her house.

It was a humid May morning, there were beads of perspiration on her temple. Wiping them off with her cotton dupatta, she smiled at her sisters, Chandni and Komal.

They were holding a small size chocolate cake, which had her name on it.

As Lolita sliced it prudently with the plastic knife, Chandni and Komal sang the birthday song, she could sense the exhaustion in their voices.

Lolita was not sure if it was her birthday. It was on this day, her sisters found her curled up in a thin blanket on a railway station and decided to take her home. She spent most of her September afternoons thinking about what her parents look like or where is her house but the thought of Chandni and Komal comforted her, she had found her family in them.

“Lolita, you’ll come with us to the railway station today, okay?”

She smiled while nodding. For years, she had been confined to a particular area of the slum. She wanted to see the world, she wanted to talk to people.

And today was her day.

Lolita watched the auto-rickshaw with wonder, she felt the air brushing back the fringes of her hair that could not be braided. Her tinted lips curved in a smile as she watched people and shops.

Chandni had draped her in a yellow saree and made her wear a tight golden blouse. Lolita smiled as she jingled the bangles on her wrist.

“Offo. You are such a spoiled brat.”

She thought they would celebrate her birthday by eating bhelpuri and gol-gappas. That they would go to the beach Chandni and Komal talked so highly of, and soak in its salty air.

None of it happened.

She was confused when she saw her sisters clapping aggressively at the passengers waiting for the train. The calmness in their voices was drained and they were squeaking, asking for money.

Discreetly, she saw women making disgusted faces, sliding their children behind their backs or covering their eyes.

She noticed men staring lustfully at her sisters, at her. She felt bare in that moment.

Hijras. Lolita did not know what it meant. She was still learning the dialect her people spoke, but Chandni and Komal had never said this word before.

She saw people who looked like her, wearing ironed pants and shirts. Whereas, she had always seen her people wearing bordered flamboyant saris, georgette, chiffon, and even banarasi on special occasions.

She noticed Chandni and Komal, as they walked over to the bhelpuri seller, unaffected by the old-man’s remark.

“What will I get in return?” The bhelpuri seller asked, smirking, his mouth outlined by paan.

“You scumbag!” Komal shouted at him as he hurriedly prepared three cones.

Lolita’s soorma was smudged by now. There were round patches of sweat on her blouse. Slowly, she asked Chandni-

“Didi, what is Hijra? Why are they staring at us like this? What are we doing here?”

“I told you Komal. I told guru-ma. Today was not the right day to do this.”

Lolita stared at Komal, at her face dripping in layers of powder, at the kajal underlining her lower eyelid.

She pulled her close, her masculine fingers curled around Lolita’s small frame.

The train whistled and all of a sudden there was commotion, people thumped here and there, dragging their luggage.

Image is a still from the movie Mukta 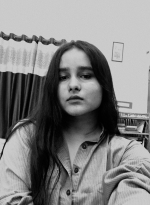 Dear Chandni, Why Didn’t You Choose A Man Who Treated You With Respect?