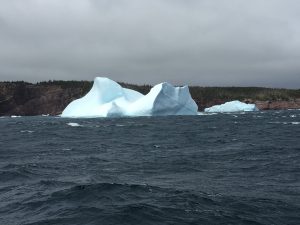 Although the summers had begun to set in when I landed, the region had a chill breeze which makes the weather pleasant and sometimes cold. The winters are extremely cold. But as Canadians say’ The best season to visit Canada is ‘NOW’ which means every season is the best time to visit with different offerings. Of all the smaller towns in Newfoundland and Labrador, the most densely populated part of the island is the capital city, St John’s.

Oh! I am already in love with St John’s, Newfoundland!!!!

Primarily, fishing, mining and forestry sectors have been the main source of occupation but thanks to growing tourism, the economy started showing signs of recovery in the early 21st century. This oldest city in North America has 4 UNESCO heritage sites. You name it and the city has it all. National Parks to old fossils and rocks to one of the largest sea birds sanctuaries. Newfoundland and Labrador encompass scenic coastlines, expansive grasslands, magnificent mountains and pristine forests. Actually different landscapes and cultures found across the whole of Canada are remarkably diverse.

St John’s has all the elements of history, culture and new-age attractions. The distinct style of architecture,  well maintained colourful wooden houses and the modern streets makes St. John absolutely an amazing place to visit. There are strict regulations on the colour, height and the heritage of the houses in the city which makes it unique and is a treat to eyes.

As they say, the best way to explore any place is by walk. Stroll along the oldest streets of the city to explore shops, boutiques, pubs with melodious live music from retro as well as from the new age, cafes and unique art galleries. The seafood available in these pubs and cafes is to die for. Don’t forget to plan a meal at one of the culinary hot spots by award-winning chefs taking Newfoundland cuisine to new levels. The city is known for its natural beauty, weather, history, culture and above all its people. People here in St John’s are courteous and treat you as friends. Certainly, they are the biggest assets of the city.  The city has an Irish flavour being the most easterly city in Canada and closer to Ireland.

St. John’s is the perfect combination of modern big-city and traditional small-town charm. It is one of the oldest and most easterly cities and has become a rare destination full of character and charisma, with a contemporary, sophisticated edge.

If you personally ask me, don’t plan anything in advance rather just go with the flow. Keep 3-4 days in hand to visit St. John’s for a relaxed yet covering every aspect of the tourism you are seeking for. Yes! Icebergs, sea birds, wildlife, history, culture, nightlife, harbour, trekking & adventure and fantastic views of the city from various locations.

One of the best places to view Icebergs in the world is St. John’s. Icebergs are the edges of glaciers that have broken off and slipped into the ocean. Most of the Icebergs come from Greenland and it takes about 3-4 years to reach St. John’s. They come in every shape, size and colour. On any bright sunny day, these 10,000 years old icebergs can be seen from many points of the city.

This was my first experience to see Icebergs. We took a speed boat, which took us closer to the icebergs crossing various small plateaus full of sea birds. The view cannot be described in words. The speed of boat and chill wind numbed my fingers, I almost froze after some point in spite of a number of layers of woollens. The flock of chirping sea birds flying over the water left us speechless. Best time to see icebergs are April, May and early June.

Because of the security reasons, the boat doesn’t go very close to these Icebergs. Just a few miles away from this place, famous ship Titanic in 1912 hit one of these Icebergs and the rest is history. 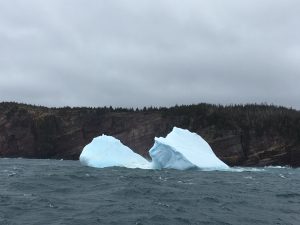 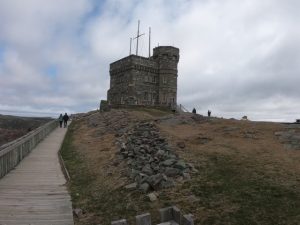 Hike up to or drive to high above St. John’s, Signal Hill offers fantastic views across the city and harbour in one direction and out to the Atlantic ocean in the other. Also known as ‘The Lookout’, in 1762 the British Military called this place as ‘Signal  Hill’. The Lookout Trail is not a reconstruction of the original St John’s Citadel but it does serve to represent the palisade and gun batteries that once were here.

Cabot Tower on the top of the hill was officially opened in 1900 and was used to flag mast signalling and as a wireless station for sending messages. There are several hiking trails which boast panoramic views and captivating scenery of the city.

Another National Historic site in St. John’s is Cape Spear Light House which is the most easterly point in North America. This is the oldest surviving lighthouse in Newfoundland and Labrador. Hike up to the East Coast trail to watch Icebergs, sea birds, whales and wander the ruins of Second World War. 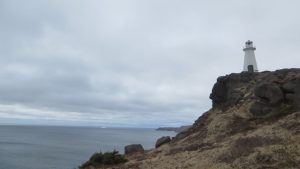 Because of the proximity, a Canadian –manned gun battery was installed during the Second World War to defend the entrance to St. John’s harbour. The gun barrels remain in place. People also visit this place to witness the first serene and calm sunrise in North America.

A small village with the best seafood- Petty Harbour 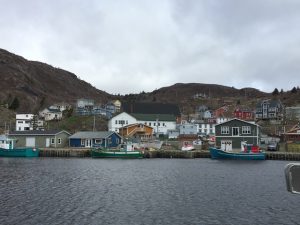 Petty Harbour in St John’s in Newfoundland and Labrador, Canada

Just about 10 minutes away from Cape Spear lies Petty Harbour. A small and picturesque village with a population less than 1000. The town settlement is from way back in 1600 and is the site of the first hydroelectric generating station. Petty Harbour is quickly becoming a world-renowned tourist destination and is home to various attractions and harbourside. Petty Harbour still has an active fishing community with fishers involved in the cod fishery and snow crab fishery. You can here enjoy the best seafood ever. 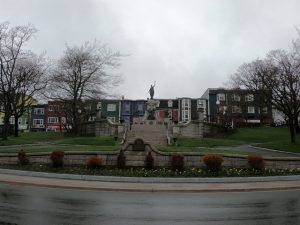 Walkthrough the Water Street of St John’s and you will see National War Memorial built-in 1924 in memory of World War.  At the top of the central pedestal is a  woman’s figure symbolizing  Newfoundland’s willingness to serve and the spirit of loyalty to the Empire. She is holding a flaming torch in one hand as a symbol of freedom and a sword in the other poised and ready to battle if she must. Crowning the Memorial’s beautiful high terrace stands a grand cenotaph, commemorating Newfoundland’s wartime sacrifices. On its various levels, the cenotaph presents five spectacular live size bronze statues. At the base, three large bronze wreaths are installed honouring martyrs of World War I, II and Korean War. It’s a park-like setting and you can spend some time reading about the war stories there.

Indulge in Food and Nightlife 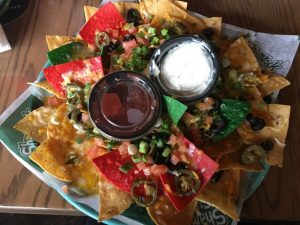 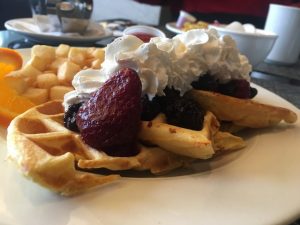 Waffles served with fresh berries and Maple syrup in Canada 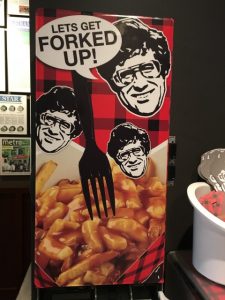 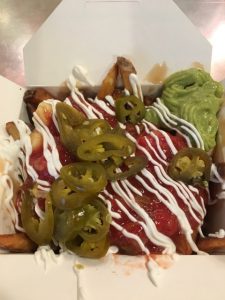 Poutinerie, a local dish made of fries and loads of homemade cheese and sauces. 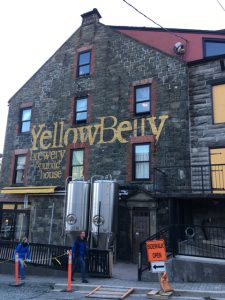 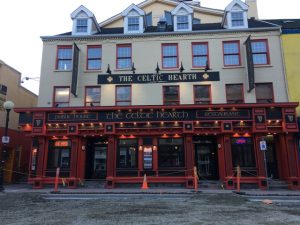 The extraordinarily vibrant nightlife in St. John’s will make you visit the place again and again for pub hopping enjoying the local music, atmosphere, food and drinks. George Street, I guess is the home to more bars and pubs per square foot than anywhere else in the world. Jokes apart, because of the Irish flavour you can enjoy your evenings with the best of the music, food and drinks. Most of the pubs & bars play live music apart from playing some local retro music. Friendly bartenders and service staff makes you feel so comfortable even for the first-timers like me. They do serve non-alcoholic drinks too. The food especially seafood is something you can relish at its best. The street is, however, open round the clock without traffic just for an evening stroll too. Local delicacy Poutinerie, available in vegetarian and non-vegetarian options is something you must try. The fries are served with various veggies and wholesome amount of varieties of cheese and homemade sauces. My sweet tooth cravings were satisfied with freshly made waffles served with fresh berries, whipped cream and maple syrup is something to die for.

The place has so much to offer and I am sure you would like to visit St John’s again and again. Ideally, do not plan anything for this destination, just be there and feel the vibes of the city.

The primary international airport for Newfoundland is the St. John’s International Airport (YYT) and it is serviced daily by Air Canada, WestJet and Porter Airlines. Direct flights to St. John’s come from Halifax, Toronto, Montreal, London, and Dublin.

Renting a car is absolutely mandatory or approach a travel agent to visit places like Cape Spear, Signal Hill and even to see Icebergs. However, the downtown area is best explored by walk.

As Canadians say the best season to visit St John’s is the season you visit. The destination has something or the other in every season, depends on what you want to see. Winters are really cold and they last longer.

The pleasant time when wildlife and iceberg sightings are the most active.  This means you’ll have a really good chance of seeing puffins and whales. Summer is when all the locals come out as well and there are a ton of great festivals to go to.

May – June and October – November

These seasons for Newfoundland are great opportunities to explore the province with lesser crowd and hotels are cheaper. Yet you will be able to explore the city to its glory.

With 23 years of experience in teaching, Marketing and as an Editor of a travel

In A Truly Progressive Move, Oyo Makes It Easier For Unmarried Couples To Book A Room