Periods are still a taboo topic in India. Women face regressive practices and are treated as if they are ‘untouchable’ on those days. Here’s the author as a 10 y.o. on her first period.

It was the 9th of September, 1997 and my 10th birthday was coming up in the following month of October. We used to take two heavy meals a day and a day time snack. It was the culture and it still is, back in the Hills where sun rises a bit too early and sets a bit too quick. So, I was busy preparing myself to get ready for school right after finishing my morning meal. My mother was on her second day of periods so even as a 10 year old it was my job to cook the morning meals till she cleansed herself on the third day and entered the kitchen. I wore my uniform and rushed to the bathroom before I could run downhill with 10 minutes time left for the school bell to ring. I stood up and saw blood stains, disgusted and angry I murmured how irresponsible mom could be to not pour water carefully even after knowing we shared the toilet with another family living in the rented quarters. I sat down but saw the blood again. This time I paused and thought, “Is that me”?

Glory and behold! It was me! I was expecting it because I felt heavy and my tummy was tight and aching since a few days. The symptoms were similar to what I used to hear when women discussed their periods among themselves. I was excited to share this with mom, quite oblivious of the traumatic days it would give me for the years ahead. I washed and ran to my room, but I remembered something that mom had told me.

I called an aunt who was our neighbor living next door and requested her to hand me my clothes from my own room. She was perplexed and also angry that a child is ordering an elderly to get something. She was a Christian lady who probably did not understand the Hindu customs. Not wanting to waste my time explaining to her, I thanked her politely leaving her all the more confused. She laughed too at the weirdness. I thought I would explain her once I am done with meeting and informing mom. She pulled the best dress she could get her hands-on and gave me. I told her that I would go to meet my mom at her workplace, so she thought it was wise to wear the best one. I wore it and ran as fast as I could up and down the hills, panting all the way to mom’s workplace.  I looking here and there and finally spotted her in the canteen.

“Mom, I am untouchable now!” I said loud in a panting voice. Her eyebrows rose up high, being cautious of people around her suspiciously looking at me, her cheeks grew red and she hushed me towards a corner and said, “Why did you come all the way to the office, then out in the sun while seeing so many men all the way? You already broke the norm and I am now so worried if you will ever be blessed with good things ” I obviously looked confused and my pride of doing as taught went down the drain.

I thought she would appreciate me for coming all the way to inform her, without touching anyone and anything but she clearly seemed angry. She looked around and spoke to the canteen lady and after 5 minutes, locked me in a separate corner in the canteen store room clearly instructing me not to touch anything even by mistake in that room. She got me tea and a snack and left.

It was the longest day of my life. I was waiting and waiting (although it was just an hour) till she returned with a huge packet of bread. I was perplexed and I thought she got me bread to eat as it was soft to touch. I read the words on the cover and  nothing was going in my head. I read for 15 minutes when Mom reappeared again with another cup of tea from the canteen. She inquired, “Did you put it in?” I was like, “I don’t know what it is!” She said, “You are the one who is getting education, I never went to any regular school, what is the point of your schooling then?”  It hit me, she was right I thought.

Well, mom had prepared me for this ever since I was five-six years old. We were a small nuclear family and lived in a tiny quarter where both of us siblings shared the room with mom. I would often spot the stains on mom’s clothes and as a curious child would ask her what hurt her, she patiently explained it to me that I will be getting blood stains too once I was a bit old and if that happened I needed to tell her. She also said that I was not supposed to see the sun, my brother and could not touch anything in the kitchen or the corner where the idols were kept. I was told that it is “Na Chunna hune din ho” when I couldn’t touch anything as I would be impure and “Paap lagcha” as in I would be cursed by gods if I dared not to oblige.

It took me 2 hours, a bit of frustrating tears and a lot of patience to actually comprehend the fact that mom handed me not a packet of bread but CAREFREE. I would have known had it been whisper, just by the name because of the TV ad and the girls’ talk in school when we saw a carelessly thrown blood soaked cloth in the toilet. This was CAREFREE, it had neither had sticker on the back nor did anything else that I could pin up. It took me another hour to put the rubber band and tie the extreme ends of the pad into it so it looks like a boat! I finally did it! I wore it and at around 4 in the evening it got dark and everyone was slowly leaving the office. That is when mom reappeared but with a BLANKET!

She draped me with it and walked me home, trying to avoid any male gaze (as it was a bad omen, I was told). She put me in a vacant room sandwiched between ours and the neighbor’s family. She said, I was lucky that this room was vacant otherwise she would have put me in the common bathroom (which had no tiles and even the door was open 2 feet from the bottom for the next 21 days. My eyes were as wide as they could be; she was not kidding! I was kept in isolation and could not attend school for seven days when I finally took my third bath because I was asked on 1st day – to wash my hair only, third and fifth day – bath). It would continued for 21 days but I was missing school and was a good student. So, she modified it saying that the Christian majority don’t follow it yet they all seemed just as good but she barred me from cooking and touching my brother till it was the 21st day.

That also happened to be my only carefree pad, as mom realized it was a costly affair and it was beyond her to afford one every month. So, she insisted that I was better off with using clothes (which my heavy periods lasting eight days in a place where rains never stopped and the sun hardly peeped in didn’t go well) More on that later.

When I look back now, I realize it would have been a scary day had my mother kept this a secret thing, not to be discussed with a young child. I am thankful that amidst all the regressive customs she made me follow, she did her best. It also prepared my brother who was just 8 years and who cooked his first meal as both me and mom were on  period and were “untouchables“.

It definitely could have been better if we did not follow the customs (which we modified and finally gave up later). I am glad I didn’t end up telling my counterparts that I fell sick or gave some silly excuses like the daughter of the aunty next door told me when a year later she got her periods. However, the incident of isolation spread and a few of mom’s colleagues probably made up stories around this chapter of my life which I can now understand. There was an inside gossip that I was barred from going to school from being a teen rebel, probably pregnant as I was an outgoing child. They collectively decided not to let their kids befriend me for as long as I remember despite being in the same age groups. They also didn’t come to see me as I was hospitalized the following year in July due to severe Malaria which almost killed me.

That was then and even today two decades later, I am back to a family where there is no escape from not following these regressive customs despite being a family of educated individuals, all in the name of, ” How is this regressive when we are providing four days of rest to the women in our lives?” Another round of endless debates ensues and my new life as a feminist in an orthodox and conservative society is now a bed of debates and rows.

It has been a horrible journey even after the first time. I might write about them gradually sometime sooner, hopefully. 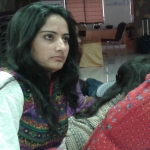 It Was Then That I Realized That I Too Would Be Forcibly Rested Every Month! [#FirstPeriodStories]

A Day In The Life Of A Work From Home Mummy {Warning: Toddler Around!}