No Country For Women [Poem]

This poem talks about the social implication a woman goes through for raising her voice; for a woman should always obey.

Tied to the stake I stand alone,

watching the sun in the far distance

The light from it though has long since gone

I have been loved and hated,

fit to be done as others please

My voice is meek, it can’t be heard

Yet I must obey what has been decreed

Tied to the stake I remain,

waiting for my fate that has been proclaimed by men

I have been called a witch, the vile one

I don’t conform to norms, I become a threat

I dared to think, so I break the law

I must be mad they say

I am a sinner, I must be punished

I shamed my family and society

and dishonored their name

My voice is ignored, it need not be heard

I must simply obey what has been observed

The crowd gathers to watch the spectacle

but not a murmur of protest is registered

The rope that ties me cuts into my flesh

I scream in pain to the deaf ears

The scent of my blood drives them with lust

They pelt the first stones to silence my screams

Amongst the crowd few voices are heard,

encouraging their men to cast the stones harder

The judges come, lit torches in their hands

They have finally come to light my pyre, to sanctify my soul

In the distance a hawk hunts its prey

while the meek rabbit hides,

whimpering in terror unable to protest

Its voice as timid as mine, unheard and ignored

The crowd watches with bated breath, predators and scavengers both

as the drama slowly unfolds

But after my death a few will call me a martyr

The murmur grows as the hour approaches

The sun has set and my pyre has been lit

The light from my pyre illuminates the crowd

casting away darkness from the faces that watch in awe

They gasp in horror at the outcome

The realisation dawns, but it is too late now

The fire consumes me, my screams have long died

The fire is burning, justice has been done

Tied to the stake my body remains

as it watches into the distance,

in this no country for women 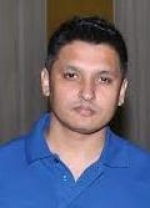 My name is Aavinash Chaliha and I am from Guwahati, Assam. I have a passion