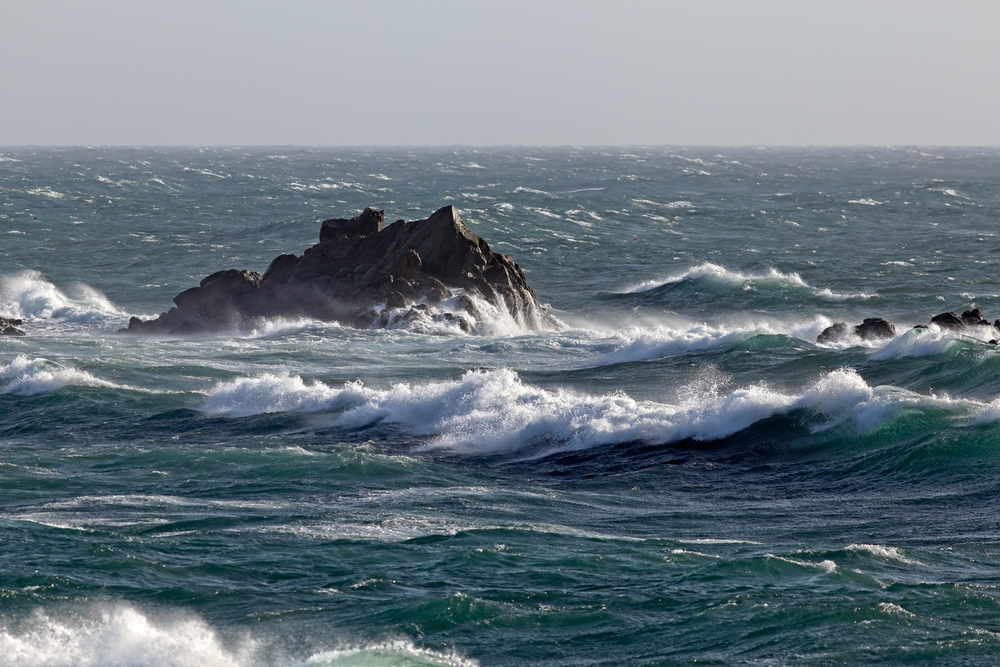 The Boulder And The Sea [Short-Story]

The sea fell in love with a boulder. The boulder remained unmoved, until one day. Read this story, on how the soft moves the hard.

So you already know that this story has a boulder. No, nothing too special. It was just a normal boulder. We will call him Mr. B.

And if there was a boulder, then there was a sea too. There had to be, right? What are boulders made for, if there weren’t any sea?
And we will call her Miss S.
So much for the introduction, and now we jump into the story.
A story with a rather predictable start, given it is about a boulder and a sea.
(I know, it gives me a sadistic pleasure to keep saying the same thing until you stop reading. Or perhaps if you’re the temperamental kind, you may even bang your head against the screen. Just saying!)
So every day, Miss S met Mr. B. As you can guess, Mr. B never moved an inch. It was always Ms. S who came to him. With all her passion and all her restless dreams. As if, in recurrent, ceaseless tides. Through the days, and nights. Every day. And then, as they’d have it, Mr. B remained as unmoved, as indifferent and as untouched as he always was.
There were times, many times, that S felt sad, hopeless, and then angry. She pulled herself back; at least she tried to. She drew her reins, calmed her mind, stopped her heart. She didn’t let the relentless waves inside her surface or move, or touch B, holding them back with all her strength. But somewhere hidden in that effort, she cannot deny that she waited to see if B missed her. And it often seemed he didn’t.

He, rather, quickly dried himself of her remnants in the sun, and sparkled the salt that she had left behind.

He, rather, quickly dried himself of her remnants in the sun, and sparkled the salt that she had left behind. The salt shined on the boulder as if it was a crown to his glory. The glory of having won over her, and not having cared to look back. The sparkles humiliated her, she wished she could get herself draw them back as well.
And then, when it was night again and the moon came out in its full bloom, she fought her passions to again go up to him to seek his cold, white touch. She would fight her desire, and then, soon after, give up. Love won over her self-esteem. She set out to meet him again. He behaved as if he didn’t even notice she had gone missing. He seemed not to care either way.
The boulder was made of stone, or so she thought. Boulders are made of stone, you know!
But then, she so wished he was not!
It was one fine Sunday morning. S had made up her mind to never come to B ever after, or at least for the next two days. It was summer, and that helped. She stepped back with all her might, few inches in about an hours effort, until B was distanced sufficiently far away and white dry as much it seemed to him he wished for.
But feminine curiosity – where would that go!
She couldn’t, but came around for a quick, careless glance, when it was about time she expected B to notice. As would be usual, she realised he probably didn’t.

However, what she noticed was spectacular!

However, what she noticed was spectacular! There was something atop Mr. B. A dark brown tall thing – something of a shape of a stick. It laid flat on the surface and formed a kind of line.
But then, a closer look, and she saw it move. Move?
Curiosity got the better of her. She couldn’t stay aloof, but approached a little closer. Now, it was clearly visible, albeit from a distance.
It was a little girl.
The girl stayed still apart from fraying its limbs at times and only by a few inches. Her clothes were torn, and the space on which her body lay seemed to be changing its colour. Miss S stepped another few steps closer and then stumbled back to realise what it actually was – the girl was profusely bleeding. Blood flowed from parts all over her body – her forehead, her stomach, her nose. The corner of her slightly open mouth marked a slight trickle of that dark red fluid, as the tongue tried to push out, failed, only to let out a constant moaning sound.
The girl was wounded, seriously wounded. She could probably be dying, could she?
S finally shed off the last bit of hesitation she had in her mind, regarding all what she intended to do to B. If the girl had to be saved, she needed him to help – she thought.
In a moment’s jerk and with a hard push, she reached close to the shore. The girl was still moaning, but the water drops on her forehead from the splash seemed to relieve her for a while.
S went very close to her this time, careful not to hurt her wounds with the salt in herself. She wished she could put a hand on the girl’s head and say everything will be fine, but then, she didn’t have a hand. She also didn’t know if everything would agree to that statement!
Before she could decide on what to do to save the girl, there was another sound that was steadily getting audible overcoming the constant buzz S held in her own body. And then, it got much sharper. S looked up.

There came a gang of men, at least twenty of them.

There came a gang of men, at least twenty of them. They divided themselves into smaller groups and seemed to be searching for something, frantically looking at each side and running and crawling and shouting words at each other.
There! – One of them shouted. Others huddled around him in fast steps.
They were pointing at the girl.
They crowded at the brim of the stone and then started to slowly crawl down the walls.
S looked up at B, for the first time in many days. She had awaited and fancied this moment for very long in her mind, always wondering what she would say when he would look back at her. She had rehearsed this moment manytime over in her mind. But never did she think it could be now, and this way.
But it had to be.
–       Will you help me?
–       What?
–       Will you help me to help this girl, please?
The men were quickly approaching, and cheered as they moved. They were crawling down the stones and could reach the boulders very, very quickly. Precisely, she had no time left. She had to act fast.
–       Will you help me to help this girl, please?
–       I don’t even know her!
–       Neither do I. But can’t you see she is in pain? And… – she looked up again at the men who were now very, very close .
–       And?
–       They’ll get her. They’ve come here to get her! They’ll hurt her, again!
–       Well, it seems like!
–       Would you not help her?
–       How?
–       Well, you can stop those men. Stop them! Oh, don’t let them cross you.– She screamed!
–       Why?
–       Will you, damn?
–       No. I’m afraid I cannot help you. I don’t know the girl.
–       But she’s bleeding! – S pleaded one final time, and then, stopped.
She realised what she had forgotten. Mr. B was made of stone.
These men were too close to be stopped in any other way.
She knew she had just one way left; and she wished she didn’t think about it. But then, these men were almost there – a few meters away!
The girl moaned again. She could sense the men near her, even though her eyes were tight closed. A drop of salt water trickled from the corner of her eyes.
It tasted the same as the Sea.

Do all girls taste the same?

Do all girls taste the same? – S wondered with a melancholy smile!
– They’ve hurt me. They’ll hurt me again! – the girl kept on muttering in a broken, husky voice. She kept saying that over and over, as if those were the only words she ever learned.
– They won’t. Go to sleep. – S said to her.
– They’ll get me, won’t they? – the girl whispered again.
– No, dear! – S muttered, softly yet confidently.
She had made up her mind! Though inside, a half of herself was still in disbelief.
The sea let out a loud roar – louder than one would expect, going by the weather reports on the newspaper. The sea boomed and rose. The sea erupted in big, big waves.
The girl smiled – a first ever since she reached there.
–  Thank you! – She said, as if in the air.
The men stopped, sensing something suddenly wrong; but they couldn’t exactly tell what.
Before they could realize, their feet were off the ground. They rode high on the waves for a few seconds before they were sucked inside the water by a forceful, strong current. As they were drowning, it felt like someone held them by the neck and squeezed in with a grip. All they could feel is, they were inside the water; deep, deep inside.
The girl was also afloat. She rode the waves with a smile on her face. She knew she was in safe hands. She knew what was happening, though no one exactly told her that.
The next day, the city went to a standstill. The papers reported a sudden, unexplained flood. The meteorology department was hard at work. They were trying to find a new name to this sudden water catastrophe which they daresay didn’t look quite like natural catastrophes from their syllabus.
The newspapers reported an unprecendented natural catastrophe. While this news filled up most of the frontpages,  the third page corner had a small box reporting a certain rape and attempt to kill at some corner of the city. In another brief news, they also reported that a wounded girl was found at the doorstep of the emergency gate of one of the leading hospitals in the city.
For the cover picture on the front page, they used the picture of a boulder which was once sturdy but now broken into pieces almost of the size of pebbles. A part of it has dissolved into the sea.
It was a submission that was destined, wasn’t it? Who’d ever think, that man-made Boulders could ever reign over the Sea? Silly!
First published here
Sea and rocks image via Shutterstock

An Absolutely Howlarious Tale Of “How To Be Miserable During The Monsoons” ROFL!