10 inspiring women from Pakistan, who have excelled in various fields, from launching media houses to NGOs. Women, who inspire us to do better. 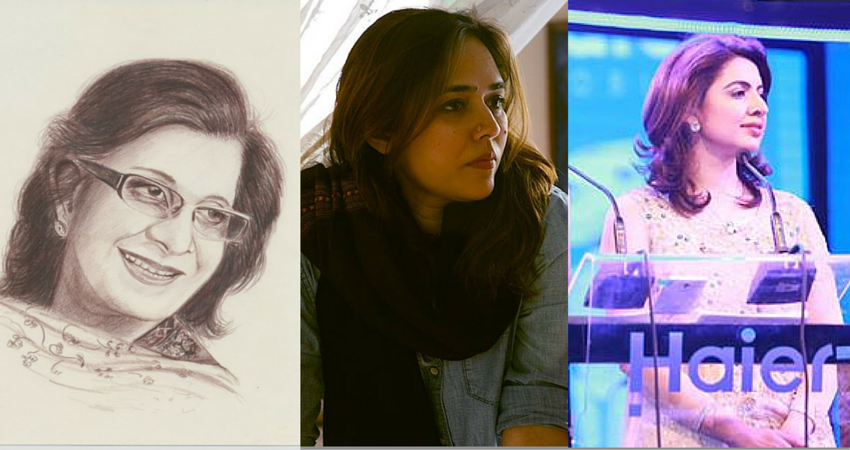 10 inspiring women from Pakistan, who have excelled in various fields, from launching media houses to NGOs. Women, who inspire us to do better.

Every country has its own heroes, trailblazers who thrive by beating all odds. If those icons are women then it garners more attention and appreciation. It might be hard for some of us to comprehend that there are such women in Pakistan as well; game changers with a daring spirit bringing glory to their Nation. These women from Pakistan have scaled new heights by not succumbing to any of the many pressures they face. Their thirst for innovation and formidable spirit will leave you inspired.

Jehan Ara (@jehan_ara) is the President of Pakistan Software Houses Association for IT & ITES ([email protected]). She has started and worked on many initiatives in the entrepreneurial space and has an experience of 29 years in Marketing, Communications and interactive New Media gained after working in various countries.

She is also a motivator and social activist who is empowering people with the use of information and communication technologies. She is also responsible for helping prevent a law by the name of PECO which would have given boundless powers to law enforcement agencies.

Mehreen Jabbar is (@mehreenjabbaris) an award winning telefilms, TV series and filmmaker from Pakistan. She grew up in a world where art and cinema were celebrated as her father was a very successful ad man. After completing her graduation from St. Joseph’s college in Karachi, she went on to study films at the prestigious University of California in Los Angeles. Post her return to Pakistan she directed and produced drama series under the banner of Tasveer productions. Since then there has no looking back for her. All her work has been critically acclaimed and won her many awards.

Ramchand Pakistani was her first feature film which released in various countries and received many awards at film festivals all over the world. The film recently had a week-long screening at MOMA (Museum of Modern Art) in New York. She was also the Artistic Director and Directing Mentor at the Maisha Film Lab in Uganda, a non-profit film lab founded by director Mira Nair. Mehreen currently resides in New York City.

Sidra Iqbal (@SidraIqbal) dons many hats. Apart from being a very successful and famous media person for the past seven years with PTV, she is also a development activist, a corporate trainer and an entrepreneur. In one of her many recent interviews. she famously stated that “I do not put my eggs in one basket.” From a very young age, she started representing her country in International debating competitions and loved to express her opinions openly. After completing her MBA from Cambridge University, she got an opportunity to be an anchor and since then she has gone from strength to strength.

She now has a reputation of a youth icon in Pakistan and has something relevant to say on all matters which impact the common man and woman. She regularly writes columns where she unabashedly shares her insights on the latest topics and issues. Her show ‘Insight with Sidra Iqbal’ is one of the most watched shows in Pakistan and now she is followed both nationally and internationally. She is the first Pakistani to be presented the coveted GR8 Women Award in Journalism in Dubai.

Haseena Apa, as she is famously known in Pakistan is an award-winning dramatist, playwright and scriptwriter. She is in fact considered the best playwright and dramatist that Pakistan has ever seen and for that she has also been awarded the ‘Pride of Performance award’ for her contribution. She is a native of Kanpur, India and post partition her family migrated to Pakistan and settled in Rawalpindi for some years after finally settling in Karachi. She had a knack for writing since childhood and even in the 7th standard, was selected to write a weekly column by the title of Bhaijan for a local journal.

She has written plays in genres ranging from comedy to romance to tragedy, touching upon various social issues as well. She has won prestigious national awards for the scripts and dialogues written for films in Pakistani and Indian cinema. Presently she is a member of Imran Khan’s political party, Pakistan Tehreek-e-Insaaf.

Sharmeen (@sharmeenochinoy) is a journalist and an Academy and Emmy award-winning documentary filmmaker. She has many firsts to her list of achievements. Apart from being the first Pakistani to win an Oscar, she is also the first non-American to win the Livingston award for young journalists. She is the first Pakistani to be awarded the Crystal Award during the World Economic Forum Meeting at Davos in 2013. It is no surprise that the Pakistani President conferred upon her the civilian honour of Hilal-e-Imtiaz for bringing glory to the nation.

She started writing investigative pieces at the age of 14 to create an atmosphere of dialogue in Pakistan. She passionately lends her voice to the voiceless in countries like Syria, Timor, Philippines and Pakistan. In her most recent work, she focussed on the transgendered community of Pakistan which won the Platinum Remi award at the 45th WorldFest Film Festival. She is an inspiration for many women all over the world.

Sultana Siddiqui is a television director, producer and businesswoman from Karachi. She started her career in 1974 as a producer at PTV and later started Eye Television Network. Under her direction, Hum TV was acknowledged as one of the top 25 companies by the Karachi Stock Exchange. Her latest work, a drama serial, Zindagi Gulzar Hai won many hearts in both Pakistan and India and for that she has been praised for “breaking the ice across the borders of Pakistan and India in current times”.

She has also spoken at various women leadership forums in different parts of the world. She has been awarded the ‘Pride of Performance Award’ from the Government of Pakistan along with many other prestigious awards for her remarkable work. She has also been featured in the bestselling book, “100 Performing CEOs & Leaders of Pakistan”.

Khadija is an educationist and entrepreneur who serve as the principal of Roots School System and also the Executive of Director of the Board of Directors for the Roots School System. She is also the CEO of Roots Ivy International Schools and the chancellor of Roots Ivy International University. She got her Bachelor’s degree from University of London International Programmes and later went on to earn a degree in Master of Economics from the prestigious Qaid-E-Azam University. She is well-known for the high level of achievement of her students and also as a women empowerment activist.

Roshaneh Zafarr (@RoshanehZafar) is the founder and Managing director of the Kashf Foundation. She is also a founding member of the Pakistan Microfinance Network and sits on the board of several NGOs and networks, most significant of which includes Women’s World Banking. She is a graduate of the Wharton Business School at the University of Pennsylvania with a degree in Finance and Economics.

Rabia Garib (@rabiagarib) is the chief executive at Toffee TV, co-founder and CEO of Rasala Publications. She is also a writer with the Express Tribune. Due to her experience in technology trade media she was selected as an Eisenhower Fellow, to represent Pakistan in the 2-month Multi Nation Program. She is also the Editor-in Chief of a local edition of the world’s largest technology business leadership magazine brand, CIO.

Shebi Najmi (@snajmiis) the founder of Code for Pakistan, based on the code for America model where techies do voluntary work with local government and give back to their community. She is a determined hacktivist who wants to empower the masses, empowering more people in the process.

Want more as a women @ work?

Women’s Web now has an exclusive work-focused monthly newsletter + monthly meets for women at work. Just enter your email address below, and we’ll sign you up! As always, we value your privacy and do not spam or sell email addresses.