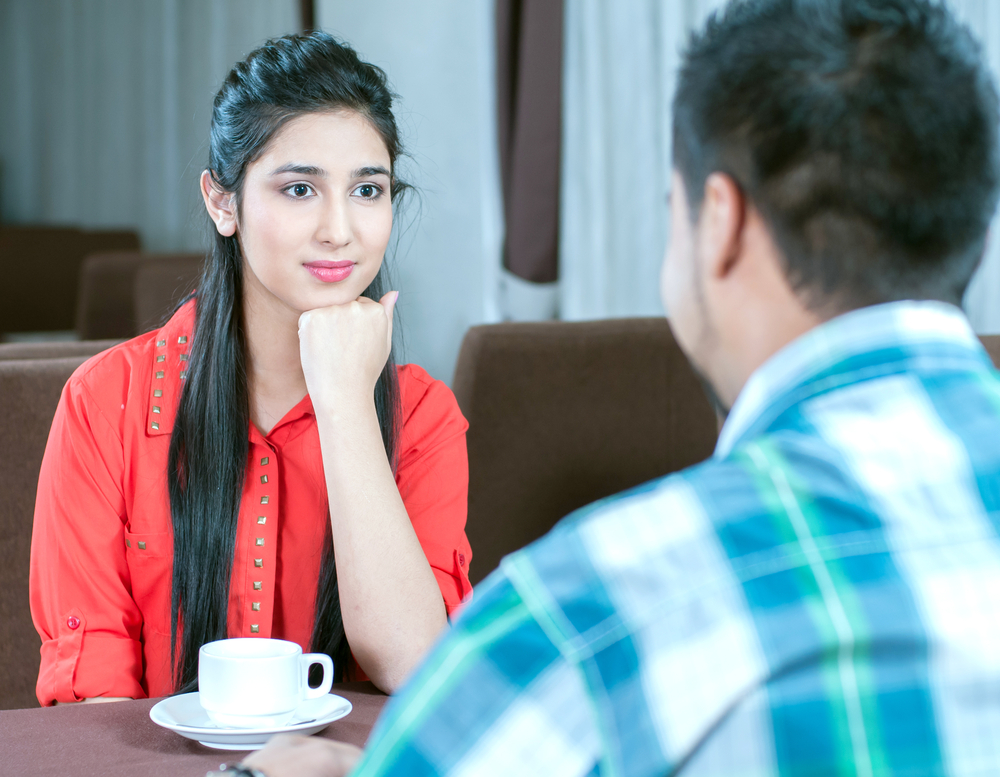 She entered the room carrying a tray laden with tea and samosas, draped in her new Kanchipuram Sari complete with gold and diamonds dangling from her ears, hands and neck. “I could play the role of a Goddess in any of the pious Tamil movies”, she ruminated.

Controlling her giggles, she stole a glance at him out of the corner of her eye to see if he lived up to all the hype created by her near and dear ones. Obviously, a stolen glance could show only so much. Fighting the urge to look up for one good look, she walked slowly and when she finally got near him, his hands automatically moved towards the tray to collect his share of delicacies, while his eyes locked with hers for a moment.

“Wow, what a beautiful pair of deep dark pools”, she thought rather gleefully. Smiling slyly she walked ahead serving the rest of the crowd in the room while the butterflies were fluttering away to glory in her stomach. No sooner had she entered the kitchen to deposit the tray, a barrage of questions were thrown at her.

She groaned at her cousins and shooed them away, all the while fighting the blush that was threatening to burn her cheeks. She was supposed to appear sophisticated and not act like a teenager, her mother had warned her earlier and atleast this time she did not want to let her down. While waiting in eager anticipation of the next moment, she was suddenly summoned by the elders. He apparently wanted to have a word with her before he made the decision, so they met in the garden just outside the house.

For once in her life, she was nervous and just couldn’t look up. She could feel the tingling sensation in her stomach and couldn’t stop her hands from shivering. The ever welcome chill breeze on that hot summer day did nothing to soothe her nerves. They stood there for five whole minutes without talking and after it seemed like forever he coughed, signalling her to look up. “Not so soon buddy”, she mused mockingly and smiled inward, refusing to look away from the ground. She felt him move toward her – closer than before but not close enough to intimidate her- and she realized at that instant that she liked him. “Hi” when he said, she finally looked up and responded with a smile. “I am sorry, this is all new to me, I don’t even know where to start”, she nodded as though in understanding but in her mind she couldn’t make sense of any of this either.

While on one day she was leading a carefree life roaming around the town, hopping from one movie theatre to another with her friends, doing sleepovers in each others’ houses, vacationing with her family and relatives – having the time of her life, on another she was shown his photograph and was informed about his upcoming visit to meet her. Dad mentioned that he was a family friend of theirs who used to play with her during her childhood days and who had now grown into a decent chap and not only looked handsome but also earned a handsome amount.

He will be here next week, she was told and was expected to be mentally prepared for the outcome of the meet. Immediately, the news spread like wide fire and in no time she was battling the onslaught of advice from well wishers and her friends alike. Nevertheless, it was fun to be the center of everyone’s attention. Like everyone in her family, she was eager to meet him, to talk to him and to get to know him.

With the birds chirruping away in the background, she finally had her chance. He was tall, dark and handsome, like the hunks she read about in her romantic novels. He even had that irresistible husky accent that she so loved. She was lost in thoughts in her dreamland with him when unexpectedly her thoughts were interrupted by the sudden silence. He had stopped ranting about his studies, work, family and friends and was watching her intensely, for how long she had no idea. “Ok, I have to go”, he said and left in a huff before she could call out. Oh God, what has she done! How could she be so distracted when he was talking. One guy she finally liked and she let him go. That too without a word! She leaned against the railing fighting back her tears and when mom walked in, she sat up expecting to receive an earful.

Instead mom hugged her and informed that he liked her a lot, her shyness in particular and wanted to marry her as soon as possible. Her joy knew no bounds, yet she remained calm and feigned indifference, silently hoping that the thud thud of her heart didn’t give her act away. Quietly she walked up to her house with the head bent down, lest someone caught her attention and did not stop her strides until she reached her room and shut the door. She jumped joyfully in her bed for having secured a prized catch of a guy and looked forward to spending a lifetime looking into those lovely eyes while listening to the sexiest voice in the whole world. Thus commenced the best phase of her life.

The days that followed passed by a in blur. The blissful days with the most looked forward to 9 am phone calls, the surreptitious visits every once in a while, the long lovey dovey letters that accompanied the beautifully wrapped gifts, an endless shower of love and affection by the new family, not to forget the anticipation of living a new life in another big house like hers with a new set of parents – those were the most beautiful days of her life. These days were cherished long after the marriage and even long after her children were born to the extent that every time she had a chance, she recounted those days, reliving them as often as she could.

Well, this was how it once was. The elusive “courtship period” between the to-be-married couples who met via the arranged marriage route.

Being exposed to this kind of courtships while growing up- be it in movies or among cousins, I looked forward to having a similar one myself. But one close look around was all it took, to burst my bubble. Things have indeed changed; a lot! The Arranged Marriage Process today takes place in 6 steps.

Yes, you read it right! Building a matrimony profile is akin to building a resume. Only, more difficult! It should have your education, goals, current job details – at least the resume stops there but the matrimony profile has just begun- extra curricular activities, eating habits, drinking habits, smoking habits, skin color, height, weight, siblings information, parents background, property owned and to top it all off the birthday, birth time, star, moon, planets, other celestial objects connected to you and what not!

What is more, the more the information revealed, the better the profile is!

Ok, this is the tricky part, and in case you know a photographer, it just gets all the more trickier. After being dragged to a Photo Studio or to a place with a beautiful “Natural Setting”, and after multiple chin ups, chin downs and face tilts, you finally get that one prized shot of yourself in which you think you look your best; only to be admonished by first the photographer for poor lighting, next by mom for the visible pimples all over the face, and then by grandmother for the tan and finally by Dad for looking fat! Some magic the computer does and all the qualms are fixed in a few clicks of the button and you are introduced to the Fairer, Thinner, Better looking version of you which you grudgingly accept to be yourself!

“Darling, I have mailed you some decent profiles, do take a look and let me know the shortlisted ones”, says the tech savvy Dad to his daughter.

“Sure Daddy”, says the daughter, simultaneously opening her mailbox in one tab and Google homepage in another. Every profile is scrutinized on Google! Thanks to the page indexing mechanisms of the “Search” Feature in Google which immediately lists down all the webpages that the Prospects feature in – be it Linkedin/Facebook/Zoominfo. In a matter of minutes the Profiles are well researched in detail and the shortlists sent to Dad.

This is where the fun begins. After the shortlisting process is done and the most eligible prospect is Zeroed in, comes the “Getting to know each other” Meet. Following is an excerpt of the conversation that normally happens during such meets;

Boy: Oh yeah, I saw that in Linkedin. I also noticed from your Linkedin recommendations that you are passionate about your field of work. Unlike you, I am not passionate about work, but you know I love to play Guitar

Girl: Yes, I noticed many “How to play Guitar” pins on your Pinterest profile

Girl: I will introduce you to her, she is working in …..

Boy: No, but I did see that your twitter feed is full of political news. You must be pretty into Politics, right?

Girl: Oh yeah I am, and by the way you are a wonderful photographer, I was really impressed with the photos that you have uploaded in your Instagram profile!

Wait, is there anything they do not know about the other? Thanks to social networking, the fun in getting to know each other first hand during the most anticipated “arranged date” is lost!

This is the stage after knowing the other person enough and after agreeing to get married to him/her. Now begins, the endless ways of staying connected no matter what the time or distance is – thanks to Whatsapp, Skype, Google Hangouts, Snapchat etc! If all goes well – if the constant presence doesn’t irritate to the extent of breakup that is – then they move to the next step.

After numerous photography sessions, endless visits to beauty salons and continuous hunt for a new “compact” flat for the couple, the marriage finally happens!

Hopefully when my time comes to relive these days, I will do so with immense fondness in my heart and a smile on my lips. Hopefully!

Couple meeting up image via Shutterstock

I am fascinated by the quote "Known is a drop, unknown is an ocean". Having