Brunei: Why Beauty Lies In The Details

Travel opens up your eyes to the beauty of everyday life. Our writer Nita tells us how buildings, transport, and entire villages came alive on her trip to Brunei. 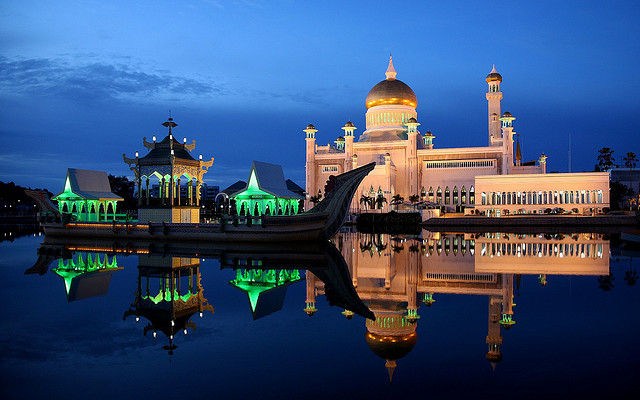 Travel opens up your eyes to the beauty of everyday life. Here, Nita shares her insights on how buildings, transport, and entire villages came alive on her trip to Brunei.

It was during the Ramadan holidays that I decided to explore the heritage of my expat country, Brunei, with my family. Brunei has a lot of exciting destinations for lovers of nature and culture. Brunei Darussalam – or ‘Abode of Peace’ in the Malay language, is indeed a peaceful country with a very friendly and welcoming local community. I decided to have a road trip, hoping to savour the true spirit of Bruneian heritage.

We passed through lush jungles, enjoying the picturesque scenery of clouds meeting the streamlined roads at the horizon. We’d planned to visit Kampong Ayer, the traditional water village of Brunei that morning. At Kampong Ayer, there are thousands of people living in houses built on stilts. The residents use boats and plank walkways for transport. All the public facilities like schools, hospitals, mosques, post offices, power stations, service stations, local markets, and more have been provided for the people living there. To me, it felt like an entire village was floating over a river.

To me, it felt like an entire village was floating over a river.

We hired a water taxi for getting a closer glimpse of life in the water village. There were many boat jetties for making transport easier.  The houses were spacious, with all the modern amenities for a better lifestyle.  We saw numerous water taxis and boats parked in front of the log houses. Kids were swimming and playing cheerfully. No wonder the water village of Brunei was given the name of  ‘Venice of the East’ by tourists in the past.

After a quick lunch, we resumed our exploration through the magnificent mosques build in the heart of Brunei’s capital city. First, we went to the James ‘As Assail Bookish mosque which is considered to be the greatest monument of Islamic Values. The architecture and interior design of the mosque was jaw-dropping – with sea-blue roof designs and giant golden domes. Adding to it was the breathtakingly fine artistry and beautifully landscaped terrains. Non-Muslims are also allowed to enter the mosque at prescribed timings.

Women have to wear a burkha, the traditional gown worn by Muslim women, which is available right at the front door of the mosque. Footwear is not allowed inside, and must be left outside the mosque. The mosque maintains a register to track all the visitors. We entered our names and country in it. Photography is prohibited inside the mosque, but there are no restrictions on taking snapshots of the captivating view outside.

Soon, I grabbed one burkha and went to the visitor’s area. The prayer halls were gigantic, completely silent, and graceful – with clean, luxurious carpets, and huge chandeliers. In the early 90’s, the Sultan of Brunei built this splendid symbol of Islamic devotion.

The prayer halls were gigantic, completely silent, and graceful – with clean, luxurious carpets, and huge chandeliers.

Impressed by the extravagant design and architecture, we steered to the Omar Ali Saifuddien Mosque, next.  Built with an outstanding design and marvelous resources from all over the world, the mosque was a blend of Mughal and Italian architecture styles.  The stunning edifice with elements of Islamic art, especially the calligraphy and geometric figures, are certainly a treat for tourists like me. There is an artificial lagoon built beside the mosque, which adds beauty to the symbol of royal Islamic faith. The mosque is closed to non-Muslims on Thursdays. The formalities for non-Muslim visitors were almost the same.

After sinking into the majestic delights of Brunei, I chose to sit back and reflect on the generous legacy left behind for generations, on my way back home.

I'm Nita, a freelance content writer and editor. After my stint at Infy as a software engineer, I chose to be a trailing spouse with a toddler on tow! I did my Freelance Feature read more...