The Working Class: Words That Changed my Life

The story of Shashi, a domestic worker, part of the "working class" in Mumbai is a hard one, but it is also one of hope and inspiration for all of us. 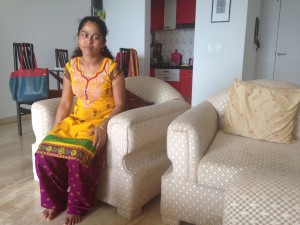 She works in my kitchen daily, halving green chillies and crushing them into tomatoes with an exotic mixes of spices.  This is one of the many household duties my maid completes for us each month for a wage of 60 USD.

Although this sounded like little, the average wage of people in her working class is around $1.30 a day.  Shashi works easily 40+ hours a week at several different houses and she must support two children on this wage.

Shashi Didi, is in short, an impressive and very strong woman.  There are millions like her living in India, women and men who work strenuous long hours with very little money to show for it.  Women like her, are not even allowed to share elevators with the middle-class families that the work for.  This often meant for Shashi, waiting half-an-hour for the one elevator reserved for the workers in a luxury apartment complex.

In this New York Time’s article, A Maid’s Pay and Moral Choices, the discrepancy between middle class families and their help is discussed. This is not an untold story, that of the working class, being considered less than the educated class.  It is however, a topic that many are not willing to approach.

On one sticky Mumbai morning, Shashi and I made our way to our mutual friend’s apartment.

Stepping into one of the many elevators designated for residents and guests, the guard growled and glared in Shashi’s direction. “Yeh meri dost hai,” I said in Hindi, and held eye contact with him, “She is my friend.”  He wagged his head to the side a bit, in a very Indian gesture meaning “okay” and pressed the number 38. As my guest, Shashi was allowed to be in the elevator; as a maid, she was not.

We were greeted at the door, at a lovely apartment in the sky. Shashi had agreed to tell me her life story and afterwards she would work as per her schedule.

All three of us sat at the glass table with cups of sugary chai beside us.  A sliding glass door led out to the balcony where vast acres of slums stretched out to the mountains of maharashta behind them.  Tell me your story, I ask her. Shashi laughs and gestures towards me saying, “You are about to leave why do you deserve to hear my life story?”  Mein Mumbai Aaongi, I assure her. (I will return to Mumbai)

Her smile widens as she describes her childhood. My mother was also a maid and my father drove a rickshaw, I did not feel poor because I was rich in love. Many people cared for me and wanted me.  Then as I grew, no one loved me anymore.

Her smile disappeared like the sun behind a cloud and she shook her head. I imagined sad memories going through her head as I gave her a moment of silence.

She had had an arranged marriage, and had been excited about it. Her parents had picked a nice man for her and told her that he was good.  It was after they married, that many of Shashi’s problems began.

After marriage, she moved in with her husband’s family. Living together became  difficult because he, like many others in his family, was an alcoholic.

Still, they had a baby together, and her husband became very disappointed when he discovered that they had a son. This was very unusual for the Indian society, since most men hope to have sons, and very often the fetus is forcibly aborted when couples discover that they will be having a daughter.

The reverse scenario, is equally painful.  Shashi and her husband grew more and more distant and eventually, she needed to move back in with her own parents.

“It was not a safe environment for my child, his father ignored him and he was surrounded by alcoholics.”

Very soon, Shashi realized how much her mother had hated the man she had married.  “Marriage is a delicate thing, nurtured not only by the people in it, but also by the people around it.  When you are angry, the slight coals will be turned to fire in your blood when they are encouraged.  This fire is hate and anger, and it will eat you from the inside and destroy you.”

Both her mother and mother-in-law, did not support their marriage.  For a while, her husband continued to come and visit her, and eventually he stopped altogether.  He does not assist her in any way and they have not spoken for years.

Whilst Shashi was living with her mother, she was courted by another man who had lived in her village.  He promised her a better life filled with love. Slowly, her heart began to grow more fond of him although at first she had not wanted to break her vows.

“For two years we were so happy, he was good to my son, and we had a daughter together.”  However, he never trusted her for breaking her first vow.

“When you love someone, you must trust them completely, that is what you mean by those three words.” Although she had remained faithful, the constant accusations that she would have an affair were too much.  “The accusations were enough to break us, the things you constantly think of someone are what they will become.  He believed I would leave, and eventually his mistrust drove me to it.”

What Shashi said had interested me, “What is constantly expected and thought of you, becomes the reality of what you are.”  I thought of the people dubbed, the working class, those who were looked down upon because of where they lived. An Indian girl had once told me, “English separates the class from the mass.”  This thought process, that people were lesser because of the language they didn’t speak, was dangerous.  When people are constantly looked down upon, could they possibly become worse than what they could have been because of the injustices in their system?

Now Shashi faced the problem, that she was a single woman, with two children both of different fathers. Daily, she deals with the issues of sending children with different last names to school. She accepts that both children miss their fathers and yet she comforts them day to day.

Most importantly, she lives in a home that is in a dangerous area, without a man to protect her.

On one occasion, a man had began arguing when she denied him entry to their home. Amidst loud voices and shoving he slapped her across the face, but left for the fear that their fight had caused too much noise.

Immediately afterwards, Shashi went to the police, asking that justice be done to the man who had terrified and hurt her.

“Bring us proof of the crime, and maybe something can be done.” They replied to her.

“It was a slap on my face, what proof can I give you?” she had asked.  “Then the crime didn’t happen,” the officer replied.

At the end of her story, Shashi burst into an explosion of frustration, stating that the policemen did nothing to help lower class people.  That one day, if something worse were to happen, they would only ask for proof and would do nothing for her.

Today Shashi is happy, she smiles and talks sweetly with me always.  She tells me she is content and that the Shashi of 32 has come a long way in 14 years. I admire this woman; despite all of her strife, she smiles and jokes more than most people I know.

By working so hard she hopes to make the world a better place, and hopes that her children will go to University and marry someone they love.

She told me – at the end of our discussion – that for anyone to change the world they must first better themselves.

Seeing Shashi each morning reminds me to expect and want the best for all people.