Why are some women scared of marriage? Because they've been taught that marriage is about changing the person you are. 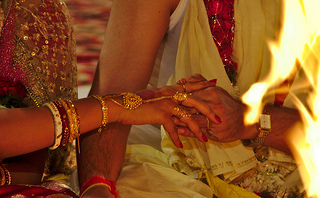 I think it largely begins and belongs with my mother as it begins, belongs and stays with other mothers. I think I wasn’t scared of marriage and what all it will do to curb me as a person because I wasn’t trained to be someone else after marriage. I was, since the childhood, put on a certain mental fodder that I took for granted would not change after the marriage. I am an avid reader and I was never fed the thought that I will be barred from reading when I got married. So why would marriage scare me?

Brought up in such an atmosphere where I was taught by example how responsibilities of the household are meant to be shared and they are not burdens under which one person would stifle and other gained girth, so why would marriage scare me?

I was never asked to do/ learn things, even on the insistence of neighbourhood aunties, because a married girl should know them or else……so why would marriage scare me?

I was implored often to get off my butt and get moving but that was not for the sole purpose of being eye candy for the husband-to-be so why would marriage scare me?

You see I was never asked to be interesting to ensure the husband’s interest in me so why would marriage scare me?

There were other things though like being taught the importance of being financially independent, well-read, thoughtful, sincere, respectful and those I imbibed to a great extent and so even after being married for seven years and seeing some of the realities differ, I am not scared of marriage.

I Am Frightened Of My Husband But...