Devapriya Roy’s The Weight Loss Club, goes beyond the façade of ordinary, middle-class lives to discover hidden quirks and eccentricities. 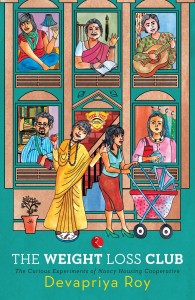 Devapriya Roy’s The Weight Loss Club, goes beyond the façade of ordinary, middle-class lives to discover hidden quirks and eccentricities.

Housing complexes in any city are centres of gossip, rivalry and friendship. In The Weight Loss Club, Devapriya Roy has chosen to set her housing complex in Kolkata, the rather oddly named Nancy Housing Society which is peopled with the type of Kolkata families a city dweller would expect; Mrs Monalisa Das’ family, Mrs Mukherjee despairing over the intellectual Apu, Meera and her new baby, Treeza and John and Ananda Bose and his mother.

Roy’s narrative shifts between happenings in the different flats, domestic ones in the beginning – Apu needs a husband and her mother is determined to find one, Monalisa Das’ Bablu has done badly in maths and she wants another tutor for him, Meera is plagued by her mother-in-law’s demands, Apu’s brother Abeer is in love with a grey eyed co-student…. and then gradually Sandhya’s narrative begins to enter the flow. Sandhya lives in Oxford and we discover she’s a saadhvi of sorts. Some mysterious legal reason brings her to Kolkata and the Nancy Housing Society.

While Roy’s writing is witty and tongue-in-cheek at times, she has a firm grasp on the realities of things. Treeza, we discover, is in the depths of depression and so is Meera, both sets of unhappiness linked to babies or the loss of them and the symptoms described in depth, suggesting familiarity. Here Roy is breaking new ground from her light hearted first novel, the Vague Woman’s Handbook.

Where, you might ask, is the weight loss bit? Apu needs to lose weight so as to attract the perfect match, a Bong boy from Chicago. Ananda Bose also needs to lose weight. However, barring the odd diet, neither of them really does much about it until Sandhya materializes in the lives of the Nancy residents like a kind of Mary Poppins – Roy’s description. She then acquires a collection of weight loss groupies – though some, like Treeza , really have no weight to lose unless it’s mental baggage.

Sandhya’s magic is yoga and philosophy. Incidentally, she is not a Bengali but hails from the Caribbean islands, the child of indentured grandparents, who comes of age in London during the Swinging Sixties – perhaps too good to be true but enough to lighten what may have become a somewhat grim story. Sandhya attracts followers in need of help and her practical magic is counterpointed by the festive intimacy of Durga Puja as celebrated in a Kolkata housing complex. Roy knows her Kolkata, which is one of the characters in the book, though occasionally she does idealise the weather somewhat poetically and hers is a rather late Durga Puja, heading for mid-October.

While Roy’s writing is always entertaining with sly touches like Ananda Bose publishing articles in Isobel Dalhousie’s paper – Dalhousie herself being a character out of Alexander McCall Smith’s novels. One could wish for slightly less skipping between the flats because, on occasion, it is difficult to keep pace with what happened to whom.

Despite everything, romance is in the air – expected actually, though most readers may not second guess Roy’s intent – and Abeer’s college fest turns out to be a rocking success though not in the expected fashion. To find out the rest, you have to read the book.

If you’re planning to purchase Devapriya Roy’s The Weight Loss Club do consider buying it through this Women’s Web affiliate link at Flipkart. We get a small share of the proceeds – every little bit will help us continue bringing you the content you like!

Readers outside India can purchase The Weight Loss Club through our affiliate link at Amazon.