My Days In Prison

Urmila Shastri’s My Days In Prison, written during the Indian freedom struggle, is a valuable addition to the memoirs of inspiring Indians. 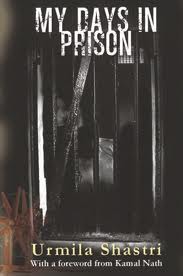 Urmila Shastri’s My Days In Prison, written during the Indian freedom struggle, is a valuable addition to the memoirs of inspiring Indians.

In India, we have a tendency to deify our heroes, and if they are political leaders, the deification is backed up by muscle power which governments are only all too ready to bow down to. When these are the heroes of the Indian independence struggle, the deification is near complete, rendering them as infallible gods and goddesses, remote from ordinary people like us.

That is where the memoir as a genre can make a critical difference – when well written and accessible to an average reader, it can be of great help in understanding the ‘demi-god’ in the context of her times, and as fully human.

Urmila Shastri’s, My Days In Prison, is a welcome addition to this genre, especially since we have so few accounts of the women who made enormous sacrifices for the sake of a free India. A Congress worker who went to prison twice for her work in the Civil Disobedience movement (and died after the second stint), Urmila Shastri sets down in simple language, a direct account of her emotions while in prison, her interaction with other prisoners and her thoughts on the freedom movement.

My Days In Prison is more poignant because its writer’s apprehensions on the kind of India that Indians would build have come true. In her chapter on the poor treatment of prisoners, she says, “…while the behaviour of the Indian superintendent with the female prisoners was always arrogant and irreverent, that of his British counterparts was above reproach…whenever I think about this, my heart grows cold and I cannot stop myself from thinking what kind of leaders my fellow Indians will make when the time comes.” Her desire is for a free and just India, the latter part of which has been a dream slowly lost in the 60 odd years after independence, and prison reforms remain on the distant horizon.

Not that Urmila holds a candle for colonialism in any way; her direct experience of life under foreign rule and its consequences illuminate her ideas. Yet, she is able to distinguish between the British government and individual British men and women who may be decent, kind, helpful or not – like any other people. For many modern day Indians who seem unable to distinguish between an individual and his or her community and religion, this may come as a surprise.

Written originally in Hindi (Kaaragaar), another surprise, a pleasant one is that both the Hindi original and the English translation have been included in one edition, a treat for bilingual readers. Sonal Parmar, the translator, has done a beautiful job of keeping intact the heightened emotional content of the writer’s Hindi – a difficult task when we consider that what sounds deeply sentimental or poetic in Hindi often translates as ludicrous in English.

Read Urmila Shastri’s My Days In Prison if you find yourself despairing over the state of the nation – even in these times, it has the power to inspire many a cynic with its idealism and its dream of a beautiful India.

If you’re planning to purchase Urmila Shastri’s My Days In Prison do consider buying it through this Women’s Web affiliate link at Flipkart. We get a small share of the proceeds – every little bit will help us continue bringing you the content you like!