The Language Of Tears

Tears – the sign of an overflowing heart, be it joy, relief or sadness; they could be your weakness or your weapon. 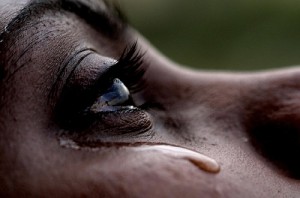 Tears – the sign of an overflowing heart, be it joy, relief or sadness; they could be your weakness or your weapon.

Crying can be liberating, persuading and most of the times embarrassing. Fiercely guarded and often misconstrued as a very private emotion, it comes out at the most public of places. Don’t believe me? Take a trip to the nearest airport.

The airport is one of those few places where you can witness unadulterated human emotions, all from a distance and yet feel like you are close to experiencing them yourself.

Staying a long flight away from home, I have passed many idle hours in the airport observing people; taking a peek into their lives, as they nearly run to make it on time, their faces, as they smile in anticipation, their hearts, as they cry in an embrace, their bodies, as they slump in exhaustion and their minds, reflecting content on finally arriving at the destination.

Seeing people all around, some in a hurry to get somewhere, others at leisure and happy to be waiting, some excited about the upcoming travel – their enthusiasm and energy obviously visible, some travelling on work with a calm impatience of wanting to get it done with, can be enlightening and inspiring. While most of these feelings of distant bonding are fleeting, occasionally a tear or a smile lingers and a couple of faces stay with you long after they disappear in the crowds.

A young man, unshaven and with bloodshot, sleep deprived eyes, probably in his early 20s, arrived with a single small suitcase as if had boarded the airplane on a short notice. He walked towards the exit in a trance, not sure of where he wanted to go, allowing himself to be led by the crowd. His body language, his eyes, the whole of his being spoke of deep sorrow and he made no effort to disguise it. Someone who looked like an elderly relative had come to receive this young man. The elderly man called out for the young man by his name, softly first and then a little louder. The sound of his name seemed to bring him out of the daze as he stopped walking and looked in either direction. His relative started taking quick steps towards the young man instead of waiting for him, as if he feared the young man would fall if not supported immediately. On seeing him, this young man dropped his suitcase, flung himself into the arms of the person who had come to receive him, sobs and gasps coming out loud and unrestrained. Clearly, the loss of someone close had brought this young man flying back home. Other travellers coming out with trolleys filled with suitcases threatening to fall off any minute, manoeuvred their way around this emotional scene, showing tolerance unusual for a place like the Mumbai airport.

Back then, I was not in the same position as today. I did not know a thing about staying 24 hours and 3 flights away. I had also never experienced a loss that made you cry out loud in front of strangers. All the noise that he made with his crying in public steered my attention towards that young man but all I had for him was a sympathetic glance and a mild irritation on obstruction of the already crowded exit area. Now, years later, after surviving distance and loss, I know, the young man deserved much more than that.

A well dressed middle aged lady waited with an inverted sign post in one hand and a bouquet of flowers in the other. School teacher kind of glasses, a dress too fine for the airport and a gleeful face spoke volumes; she was waiting for her sweetheart, I concluded. The fact that she didn’t intend for others to see what was written on the signpost fuelled my curiosity. Why not write a discreet letter instead?

The flight she was waiting for arrived and passengers started trickling by but there was no sign of the person whose appearance she anticipated. At one point I couldn’t see her anywhere in the vicinity and thought she had left. But after a while she returned in sight. Now, a little nervousness had crept up on her face, eating up the joy. The rock solid waiting at one place had turned into restless pacing in the limited space available. Finally, literally the last person to get off the flight made his way towards the luggage carousel. She saw him before he saw her. She turned the sign so that he could see it and slowly made her way towards him. Her unhurried movement was a surprise coming from someone who had been waiting for so long. From where I was sitting, I could now see what she was holding in her hand and as soon as I read it, the happiness, the nervousness and the stealth, all of that made perfect sense. It was a marriage proposal! The sign read “I am ready to marry you” followed by her sweetheart’s name. I looked away, not wanting to pry on the private moment when he took her in his arms in a tight hug but not before I saw tears drop behind those glasses, rolling away as she smiled some more.

A part of me wants to stop writing right here. It is one thing to pen observations on strangers, but writing about what strangers see of you, is another challenge. Yet, in my heart I know it would be dishonest to hide the episode that brought back memories of random people who could right now be anywhere across the globe.

It is always hard to watch family leave, especially when you don’t know when you are going to see them next. A year, 2 years, maybe even more than that – uncertainty only adds to the misery. I was dreading this day from a week ahead. I always thought that with age comes wisdom and with wisdom comes acceptance of things you cannot change. Well, I surprised myself. I discovered that accepting is one part, missing is another.

This trip to the airport was different. I was too preoccupied with my own feelings to notice anybody else’s joy or pain. One by one, our guests took care of all the travel formalities as I stood in a corner watching my children play. With the luggage checked in and boarding passes in hand, we walked them to the security clearance line. It was there as I hugged my family goodbye that the tears came out, faster than I wanted them to. The tears weren’t entirely out of sadness. They were for everything that happened in the time spent together. The fun, the fights, the vacations, the idle time, it was all that we did together and the feeling of that time being over, that made me cry.

They moved on in the line, and I moved outside the line, changing places to get a glimpse of them. Embarrassingly, the tears didn’t stop. I wanted them to, but they just kept coming anyway. A lady, a couple of passengers behind them, kept looking at me as I struggled to regain composure. People shedding a tear or two at the airport while saying goodbye was probably not an unusual sight so I don’t think she was wondering what happened. Whatever the reason, she kept looking at me from time to time. At a corner while I waited behind the barricade, the line took a turn and she came face to face with me. She gave me a kind look and a nod. It could have meant anything, that look. Anything from “It is going to be ok” to “Take care” to “Stop making a fool of yourself”! But I think I felt exactly what she was trying to convey. The kind look said “Don’t attempt to hide your tears, it is ok to cry” and the nod said she understood why I was crying.