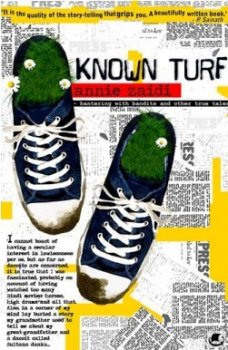 Known Turf: Bantering with Bandits and Other True Tales

Annie Zaidi’s Known Turf, engaging essays on an India beyond the metros is surely among the best non fiction books of the year.

A woman slashing a Velasquez in early 20th century London because a beautiful woman suffragette has been maimed.  A baby lighter than a handbag, because of malnutrition.These are the images that float to the top of Annie Zaidi’s book of essays, Known Turf: Bantering with bandits and other true tales.

Zaidi is a journalist, half Punjabi and half Lucknavi tehzeeb, self conscious about admitting to her faith and about asking butchers whether they halal their meat – the Prophet she says, stayed in many homes as a guest without asking awkward questions about faith or the lack of it.  “…I find myself recoiling from both ends of the extreme – the injunction to wear the veil, and the insistence on banning it…,” she writes.  And she is a die hard feminist determined to make a noise about it because she says that unless women make a noise in India, they will get nowhere.

Many of the essays in the book were originally written for Frontline where she researched stories like the one about the Missing Girls of Morena. Morena is a district in Madhya Pradesh where despite a crackdown on sex determination tests, ultrasound machines are ‘back in business’. Zaidi tells us, “The district has a dismal sex ratio of 822 women for every 1,000 men. In Kailaras and Pahadgarh blocks, at least 100 villages have a sex ratio of less than 600 and in Jaura block it is less than 500 in some villages.”

Foeticide is one of the themes that recurs, since, despite stories about the Chambal dacoits and her love for tea, Zaidi’s main concern, and with reason, is the role of the Indian woman in a supposedly advanced nation.  She is at her best when at her most personal – the tales of the dacoits fail to grip because there seems to be a certain lack of involvement where the men are concerned.  However, bring in Phulan Devi, gun in hand and Zaidi is alert.

It is not that she preaches; her stories are often told through funny conversations that catch the flavour of life outside the metros, as for instance, the incident  in a train where she is shielded from a man’s crotch in her face by the arms of a frail old lady. But then the humour abruptly gives way to brutality and you find the ground dropping from under your feet.

None of the subjects are unexpected – they come, as  Zaidi’s title indicates, from known turf, the expected ground trodden by journalists who wish to be activists, with an almost but not quite  Arundhati  Roy undercurrent. What makes them worthy of notice is the way Zaidi handles her matter.

In her confrontation with these incidents, she is often faced with moments of anxiety and self doubt because the situations are so far removed from her ordinary metro lifestyle.   “What do you do when a man minus three limbs in a government hospital trauma ward begins to sing?” And she involves the reader, also presumably among the English speaking classes and living in a metro, in those anxieties. What do you do after all to solve the problems that are all around you?

That Zaidi’s blog triggered off with the same name as the book is hardly surprising… And there are surely more books to come from those posts.

If you’re planning to purchase Known Turf: Bantering with Bandits and Other True Tales, do consider buying it through this Women’s Web affiliate link at Flipkart. We get a small share of the proceeds – and every little bit will help us continue bringing you the content you like!

Readers outside India can purchase Known Turf: Bantering with Bandits and Other True Tales through our affiliate link at Amazon.

5 Books To Read When Dealing With Grief