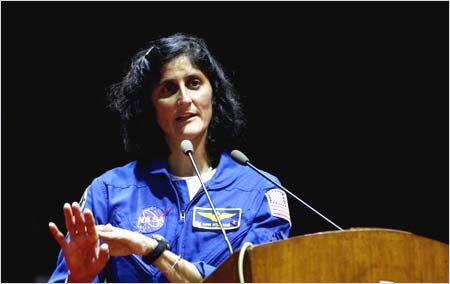 Sunita Williams needs no introduction – her space odysseys speak volumes of her courage and conviction.

Soaring above the skies, Sunita Williams is the second woman of Indian heritage after Kalpana Chawla who was picked up by NASA for a space mission.

According to her father, Sunita has always been the adventurous type. After her induction into NASA in June 1998, she had to undergo rigorous orientation briefing, shuttle system and flight training and survival techniques to meet the requirements of an astronaut candidate.

Sunita holds three world records for female space travellers thus far. She has been holding the undisputed record for the longest space flight, which stands at 195 days, four spacewalks – the highest for a female astronaut till date and also for the highest total number of time spent on space walks (29 hours and 17 minutes).

Sunita also holds the record for running the first marathon run by an astronaut in orbit while her sister and fellow astronauts completed the marathon on earth.

Manmohan Singh, the Prime Minister of India has hailed Sunita to be an inspiration to all women whose dreams know no limit. She was also bestowed with a number of awards and honours. She received the Navy Commendation medal twice, Humanitarian Service Medal, Navy and Marine Corps Achievement Medal, Medal for Merit in Space Exploration and the Padma Bhushan.

– For following her heart and achieving her dreams, no matter how tough the going got

– She believed in making the most of the opportunity, having run a marathon in space because she wanted to participate shows her will to mould the situation as per her wishes

Dealing With Criticism Of Your Child