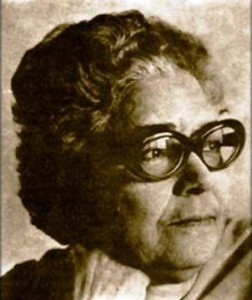 Ismat Chugtai was born in Uttar Pradesh in 1915, and grew up mostly in Jodhpur, the ninth of ten children. Whilst still in her teens, Ismat was mentored and taught by her older brother, who was already an established writer. Ismat was the first Indian Muslim woman to earn both a Bachelor of Arts (B.A.) and a Bachelor of Education (B.Ed.).

Her first short story, Lihaaf, was about a frustrated housewife who finds sexual gratification and emotional support from a female house servant. The publication of the story inspired a storm of protest – Ismat was condemned, and finally, charged with obscenity. During the court case, which lasted nearly two years, Ismat refused to apologise, and finally won the case.

The rest of her writings, exploring topics such as female sexuality and middle-class gentility with a strong feminist ideology, made her one of the most controversial and successful writers of her time. She became an icon of women’s empowerment and education, and remained much respected until her death in 1991.

– She contested the conservative, stifling and bigoted views of her time, writing about taboo topics in a time when women were not encouraged to have a voice at all, let alone on controversial topics.

– She spoke her mind freely and didn’t back down in the face of strong controversy and criticism.

– She brought women’s issues to the limelight and highlighted women’s struggles against the oppressive institutions that tried to control them.

– She explored and respected religions other than her own. Even her death was controversial because her last wishes were to be cremated, despite Islam’s dictates.