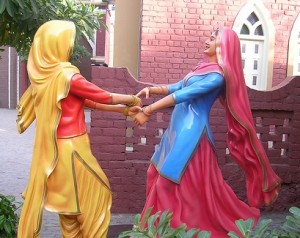 Samdhya Renukamba, in her own words:  A book-loving, stay-at-home-mom to an equally book-loving 11 year old. I read anything and everything, especially children’s books, which I review on Saffrontree. I am fascinated by words; the way language evolved and is used.

She did not have any friends who stayed near her house. Not a single school friend, nor anyone near her age, or sharing her interests. There were just her younger brothers, who according to her, were brats not to be seen around with.

At least, there were the cousins, who stayed a few buildings away. Something was better than nothing, so she decided they’d do, to hang around with. The cousins had a neighbour, an only child. This girl, a few years younger, latched herself onto her, becoming the proverbial Mary’s lamb!

They had nothing in common, not even their interests, but something clicked. Over the years, as the two girls grew up, the reasons for hanging out with the cousins dwindled, and those for spending evenings with the younger girl increased. They became a twosome and shunted the cousins out.

As the two friends grew up into adulthood, the natural gap of 7-odd years between them began to close. They were women, with totally different destinies, totally different career trajectories, but with complete understanding of each other’s minds. Life happened, and they lived in widely separated places, different time zones, even.

They were as different as chalk and cheese in their family lives as well, which could not have intersected at any points except the one which they both overlapped at. Their husbands never met each other, not by design, but just by chance. They each knew their wife’s friend well though, and each was always welcome to the other’s home.

Over two decades, they met maybe once or twice a year, but every time they met, it was as if they had never been apart. Each intuitively knew if the other was in any kind of trouble or difficulty, and it would be an eerie coincidence that they would try to contact each other just when a friend was needed.

Despite never being able to attend the major events in each other’s lives, they have been able to remain clued in to each other’s triumphs and troubles. If needed, one just has to reach out to find the other right there.

I am the older girl of the two, and this is the story of my friend M and me. A friendship between two completely dissimilar personalities, which has simply endured on love, loyalty, trust and understanding – through thick and thin.

The Diary Of A Young Girl