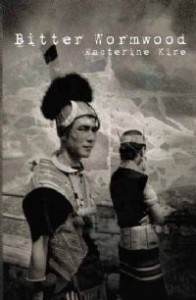 Easterine Kire’s Bitter Wormwood, takes us into the struggles of an oft overlooked region of India – the people of Nagaland.

I have always been somewhat shamefaced about my lack of knowledge and insight into the politics and history of the part of India one usually thinks of as a bunch of small states collectively referred to as ‘The Northeast’. I have always wanted to know more, but paucity of time and a brain simply too overloaded to take on a bunch of lengthy non-fiction tomes has kept me from doing anything about it.

And so, when I was offered a chance to read and review Bitter Wormwood, Easterine Kire’s historical novel set against the backdrop of the Naga struggle for independence, I jumped at the chance to find out more about the Nagaland story.

The book is told largely through the eyes of Mose, a Naga villager who lives out his life during tumultuous times in Nagaland. It follows him through an uncertain childhood through to his short-lived stint as a member of the Naga Underground and then later as he, along with his family, attempts to live a relatively peaceful life even as the Naga movement loses ground and descends into violent factionalism. In the concluding chapters, it follows his grandson Neibou as he moves to Delhi to study and comes face-to-face with the racism and stereotyping that North-Easterners suffer from, in Indian metros.

It is a simply told story with few literary airs and graces but it packs a punch because the story itself pulls you in. The foreword by the author spells out the shocking scale and brutality of the events that have unfolded in Nagaland in the last few decades and with that at the back of one’s mind, the story has a disturbing ring of truth to it and makes progress through the novel an often gut-wrenching affair. The key characters are well-defined and relatable and bring a human element to the story that statistics and reports often cannot do by themselves.

Amidst the violence and politics, there is also a glimpse into the culture, beliefs and rituals of a community that most of us don’t know a lot about. In fact, even the name of the novel is actually the name of an actual herb called bitter wormwood that the Nagas believe protects them from evil spirits.

It’s not a novel that you can forget easily once you flip that last page. It leaves you with a lot of questions of the ‘what if?’ and ‘what happens next?’ variety. It also leaves you wanting to know more about what happened and how things stand right now. It makes you question the very nature of so-called democratic India, and how ‘independence’ is viewed across the diverse groups that make up our population. It also raises questions about stories that are well-known in the mainstream and those that seem to have been silenced or ignored. All in all, it is a book that is guaranteed to make you think.

If you’re planning to purchase Easterine Kire’s Bitter Wormwood do consider buying it through this Women’s Web affiliate link at Flipkart. We get a small share of the proceeds – every little bit will help us continue bringing you the content you like!