Taking digs at the Indian psyche, Cyrus Broacha’s ‘The Average Indian Male’ makes for a fun and entertaining read. 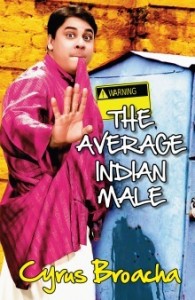 Taking witty digs at the Indian psyche, Cyrus Broacha’s The Average Indian Male makes for a fun and entertaining read.

When you pick up a book by Cyrus Broacha, you already have an idea of what to expect; non-stop chatter loaded with sarcastic humour, at times making sense, at times making no sense whatsoever – and at other times making it difficult to distinguish between the two! The Average Indian Male, is no different – it is quintessential Cyrus.

The book is divided into two parts, with the first part in the form of letters from people aggrieved for some reason or the other, by the average Indian male. Delving into the many ‘unique’ qualities of the average Indian man, be it a cloying devotion to his mother or his disgusting bathroom habits, Cyrus analyzes several aspects that make men typically men, and provides some ‘enlightening’ answers to them. The second part, in the self-explanatory words of the book, consists of ‘The Incoherent Thoughts of an Average Indian Male’, where Cyrus muses about ‘important’ issues such as the tendency to smother ourselves with talcum powder and the phenomenon of  ‘phamily phrends’.

The book definitely has a cynical undertone to it and plays up stereotypes unapologetically. But when you pause to consider if you know atleast one Indian male who matches the characteristics mentioned, the answer is a vehement yes!

Further, it is not just the average Indian male who is being scrutinized  here; rather it is the average Indian family, society, beliefs, attitudes – in short the average Indian way of life itself. Starting with the harried woman who has to whip up fresh and specialized meals in a jiffy for the entire household (low sodium for the BP patient, non-vegetarian for the guest, low calories for the dieter etc.) before she can sit down to enjoy her meal in peace to the utterly gross scenes of men treating open spaces as public toilets, these are incidents which one comes across in our everyday lives – so much so that, it is almost considered ‘normal’ accepted behaviour and it hardly surprises us any longer!

The language no doubt is free-flowing and Cyrus’s thought process never fails to amaze me. His ability to connect random things, throwing in facts and figures, not to mention references to people, some real and the rest no doubt made-up, has always been his strong point.

If I have one complaint with the book, it is that many of the chapter titles are in Hindi. I wonder why it was assumed that everyone who reads the book would comprehend Hindi. The Average Indian Male does not offer any profound insights or move you emotionally. It is by no means a spell binding pot boiler or a fast paced page turner. But if you are an Indian male and can take a jibe or two in your stride, you are in for a good laugh. And if you are a woman, you would say, and I quote Cyrus here, ‘Thank God! We weren’t born men’!

If you’re planning to purchase Cyrus Broacha’s The Average Indian Male do consider buying it through this Women’s Web affiliate link at Flipkart. We get a small share of the proceeds – every little bit will help us continue bringing you the content you like!

Readers outside India can purchase The Average Indian Male through our affiliate link at Amazon.