Kumari is an October 2022 Malayalam film about women's lives featuring Aishwarya Lakshmi, Roshan Matthews and others with elements of mythology and horror.

While watching cinema in the theatres took a backseat during the pandemic, there was no dearth of versatile content on the small screen. Love it or hate it, the streaming giants are here to stay. Thanks to them, I have had the pleasure of delving into slices of Indian culture this year, which were otherwise alien to me. Yes, it’s cinema I am referring to and Indian cinema in its true essence.

Movies such as Kantara, Kumari, and RRR weren’t just esoteric pieces that captured the flavour of the region whose story they narrated. These had a sort of mass appeal because of certain universal themes at work. The makers of these films made sure that their homework was in place. The sheer genius of filmmakers, such as S. S. Rajamouli, Rishab Shetty, and Nirmal Sahadev, peeked through their films, where they combined an edge-of-the-seat storyline with historical, mythological, and fantastical elements. The best part about each of these movies was the rich tones of ethnicity that flows through them like blood through veins.

Picking one of these stories as a favourite is arduous, considering the variation in their styles, story, and writing. But strong feminine characters set in the backdrop of cogent mythical worlds have been a weakness of mine since forever. ‘Kumari’ fulfilled that criterion in a creative and fructuous manner.

What is the film Kumari about?

The film revolves around a young girl, who is married into a rich, feudal household in rural Kerala. Her husband, the younger son of his family, is rumoured to be an eccentric character by her brother. A thought, that she perceives, had been entrenched in the minds of his family and the village his family commands. As days roll and Kumari settles into her new household, she realises things aren’t what they appear. The once-puissant landlords of Kanhirangat, her in-laws, have skeletons in their cupboards that rival the dark secrets and mysteries tucked away in the mountains of Illymala.

For me, it was like watching a string of ‘mistakes’ committed by the main female characters in the film. Right at the beginning of the story, they inform you that the events and misfortune about to befall the Kanhirangat landlords, results from one Goddess who couldn’t resist her temptation to live on Earth. As the movie progresses, the irony bites you deep in the gut. Whether it is Nangakutty, Kumari, or any other female character in the film, they are all considered guilty of crossing the line etched for them. In other words, daring to follow their hearts.

It might come across as a simple, folklore-inspired film for most. But if you can see beneath the layer of pixie dust, you will see how effectively the filmmaker captures the shackles imposed on women by the patriarchal, almost brutal, mindset of the men in the story. Aishwarya Lekshmi, who essays the title role of Kumari, is the one who breaks the wheel but not before knowing the fate of the other Kanhirangat women who had dared to breach the traditions and rules.

The recurring motif of motherhood

Another recurring concept that is cleverly intertwined with the narrative is that of motherhood. The women in this imaginary tale of sorcery and revenge have to pay the price by giving away a child.

Nangakutty, the wife of the Thuppan, the feudal lord whose acts plunged his lineage into despair; is forced to sacrifice her child to a monster. Her fault—she offers food to a tribal boy and accepts mangoes from him. Thuppan, who identifies the boy as a lowly outcast, rebukes his wife cruelly for serving him food with the same hand, with which she had accepted mangoes from the boy.

Lakshmi, Kumari’s sister-in-law, choses to remain childless, rather than having one and giving it away to please the menfolk of her family. Then there is their mother-in-law, who is a silent witness to all the atrocities and sins committed by her husband and sons. Her elder son’s murder is yet another endorsement of the ‘destroying motherhood’ theory, which stares at the viewers throughout the film.

Kumari, of course, defies all odds and even joins hands with the devil to avoid the same fate. Though the end of the film is predictable, we should watch it for the sheer ingenuity of Aishwarya’s performance and the adept handling of such a dark subject within the cocoon of a fantasy lore. In not one frame, Aishwarya seems uncomfortable with her character. She comes across as a genuine, caring wife, and a fierce, protective mother.

Masterful weaving together of women’s lives with regional mythology

Kumari scores for me because of its effort to bring regional mythology to the forefront and upholding womanhood at the same time.

During the first half of the film, Kumari appears to be the epitome of a docile wife who loves her husband enough to put up with all the stringent impositions her in-laws subject her to. But as we reach the midpoint of the film, we see her break away from the role of dutiful wife and daughter-in-law. She has the courage to do what had to be done, and what she deemed right. Of course, the villagers paid the price for her actions. She isn’t morally the most upright person, and it is refreshing to see that she isn’t this evil character either. But someone who has the courage to take a risk in a setup where her life meant nothing before age-old rituals.

Some mistakes have to be made in order to drag a cursed legacy out of the pit. What menfolk in her family cannot realise, she does. The last frame of the movie showcases Kumari as the mistress of the house, the one in charge of decisions that earlier only the men in her family could take.

Set in an era when letters were still the only mode of communication, this film’s message might be old and time-tested. But it has its heart in the right place.

Register at Women's Web to get our weekly mailer and never miss out on our events, contests & best reads - you can also start sharing your own ideas and experiences with thousands of other women here!
domestic violencepatriarchywomen's lives 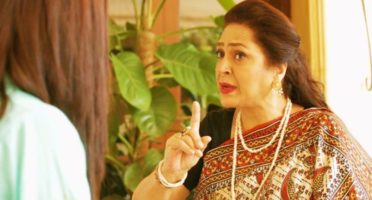