When My Daughter Was Born After 10 Yrs, I Realised That The Affirmations Had Worked For Me

After repeated failures, one of my doctors told me that my husband and I were amongst 22% of the couples who experienced unexplained infertility. So the only solution was to keep trying.

“Accept what may come your way, instead of trying to figure out what, why and when,” Blanca said. But I was in no place to grasp it.

Blanca and I had worked together for a while; she was the director of the institute I worked for and a great friend.

Earlier that day, I was teaching my students. It was an ordinary day at work, except that the joint pain I had been experiencing then was excruciatingly bad. As I continued to teach, the pain got so intense that my hand couldn’t bear to hold the textbook, and it fell down.

As it hit the ground, I looked at the book, and It felt like a painful reminder of how weak and miserable I had become, the stress I was experiencing. Unable to hold in my frustration, I broke down. Seeing me sob uncontrollably, my students slowly started to walk out.

And there I sat, all alone, crying my eyes out.

“Will I ever become a mother?” I asked God. I had run out of hope and was desperate for an answer.

It had been seven years since my marriage, and five years of trying for a baby had yielded no fruits. I had left no stone unturned, all for the joy of being called a mom someday.

As I sat in the classroom, I recalled everything I had been through in the last few years. I had visited close to a dozen infertility experts, feeling like a broken-down machine that needed to be fixed. While some of the doctors blissfully daydreamed while I shared my concerns, some others were downright rude and pushed me to tears.

I particularly remembered this one doctor who was confident that I had thyroid issues and a few steroids would do the trick. But I was skeptical of taking steroids. I knew the kind of pain and the long-term side effects it would inflict. So, to be sure, we visited an endocrinologist— a hormone expert. To our relief, the doctor told me that I never had thyroid problems!

Every few months, we would switch to a new doctor, who would recommend an even newer set of endless blood tests and scans. After checking everything, including my husband’s specimen, they would conclude that there was no other issue except my Polycystic Ovaries Syndrome (PCOS). Moreover, they would say that it is one of the most common and reasonably easy to treat causes of infertility.

After repeated failures, one of my doctors told me that my husband and I were amongst 22% of the couples who experienced unexplained infertility. So the only solution was to keep trying.

I snapped back to reality. It had been over 30 minutes since my students had left the classroom, and I was still a mess. I looked at my hands and legs; with all the medicines and treatments I had subjected myself to, every joint in my body hurt.

I teared up again, thinking about how despite all this, I had seen no glimpse of hope.

Right then, Blanca walked in. She knew what I was going through. Although my chest felt heavy and I could barely talk, I asked, “Why is God not listening to my prayers?”

“What makes you believe that he is not listening to you?”

“My body and mind are under so much stress and pain. I am exhausted, it’s been seven long years, and I am still not able to conceive.”

“Well, if you believe he is not listening, then how come you are still standing in front of me?”

“Tarana, if God decides to give you a baby, it is fine, and if he does not, that too is fine. Accept what may come your way, instead of trying to figure out what, why and when.”

Blanca added, “The more you ask, the more your mind will take control over you. It will trap you in an emotional maze, and if you want to be out of it, then take over the reins.” She gave me a warm hug and left.

That day something changed.

I never once cried over not being able to conceive after that day.

Next month I was again sitting in my doctor’s cabin, hoping for good news. And yet again, the doctor calmly said those dreadful words, “You are not pregnant.”

But this time, it felt different; I could feel some energy enter my body. It felt as if someone lifted a burden off my shoulders. I recalled every word that Blanca said, and it all made sense to me at that moment.

It felt as if God had sent her as an angel in disguise to tell me that it\’s better to light a candle than to curse the darkness.

I decided at that instant – the next time I visit a gynecologist, it will be when I get pregnant the natural way.

After that day, I never touched any medicine. I moved on with my life, but subconsciously I was aware that I wanted a baby. However, I did not let that thought take control over me. The ever-curious society continued to ask a zillion questions. Still, I chose to respond by simply saying, “If it is meant to happen, it will happen, and it will happen naturally.”

Every day I visualized myself pregnant, cuddling my baby, my baby crawling all over the house and calling me Mumma. But, of course, I never discussed any of this with anyone. The world had given up on me, but I was confident that it would happen sooner or later.

Around the same time, I happened to bump into an old friend of mine, Sukanya. While we were chatting about our lives, she shared how affirmations—positive thoughts in which you have faith and believe it to be the truth— changed her life. She pulled out her phone, ran a quick search on the net and forwarded me a list of affirmations that I could read to get pregnant.

With my newfound sense of hope, my body and mind felt at peace; I started to affirm with all my faith, focus, love and gratitude before the almighty.

Two months later, in 2015, I missed my period’s date. I ignored it as irregular periods are pretty common for those with PCOS. But my husband kept insisting that we visit the gynecologist. He had a strong intuition.

And wonder of wonders! After ten long years of pain, suffering and desperation, I was finally going to be a mother, that too without any treatment. Everything happened as I had affirmed; a healthy pregnancy and a healthy baby.

My dream was just to be a mom someday, but I became so much more along the way. I learnt to be more patient, grateful and have faith in myself. But, above all, the journey convinced me that miracles happen, and it’s us who have the power to make them happen.

After all these years, if today someone asks me If I have seen God. I will have but one answer, “The day my daughter Shanaya was born, it was the closest I felt to him.”

Shanaya— meaning a gift of God. 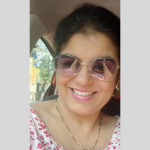 My name is Tarana Puri, I am a spanish teacher, translator & interpreter. I have my own classes named as "Hola Spanish" in Mumbai. I am mother of a 6 year old girl. I had read more...