So without any further ado, here’s the steam on this koffee episode.

Shah Rukh had earlier said how what attracted him to Gauri besides her legs was her contented nature. Both were in ample display on the show. 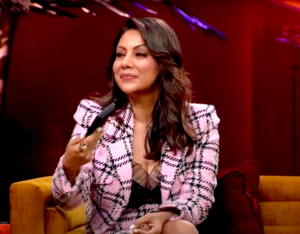 There’s no way you couldn’t fall in love with Gauri Khan. If we can credit Malaika Arora Khan for pulling off the most risque outfits (read not wearing age-appropriate outfits, whatever that means) in her fifties and rocking it, they haven’t noticed Gauri Khan closely.

There’s a quiet confidence about Gauri that speaks the loudest. More than quiet, the vibe is chill. From the minute she entered the show in a baby pink tuxedo checked blazer and mini skirt paired with a black lace camisole, Gauri exudes ‘boss lady’ vibes.

It was nice that the show started with a focus on her career as a design entrepreneur, and whether her celebrity status comes in the way of her projects.

Meet the other guests, Maheep Kapoor and Bhavana Pandey

The focus then shifted to the other co-guests on the show, Maheep Kapoor and Bhavana Pandey. 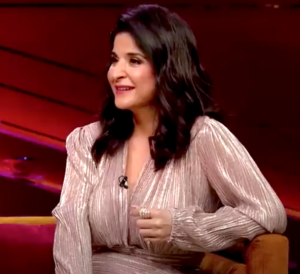 Some may call her a witch or bitch, but I’ve always liked Maheep Kapoor ever since I watched the introductory season of The Fabulous Lives Of Bollywood Wives. I can’t quite place a finger on it, but perhaps it’s her ‘unlikeable’ factor. She doesn’t give a damn what anyone thinks of her, and that’s highly attractive in my eyes. Shanaya Kapoor, who later came on the show, attested to the fact that Maheep’s a cool mom, and covers up for her when she doesn’t do the goody-goody things in life. 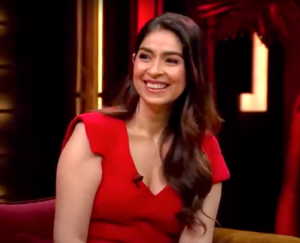 Bhavana Pandey has a congenial personality. There’s nothing to dislike about her because she talks sense most of the time, and is just so sweet and accommodating. I can see why these women make such good friends.

Were Maheep and Bhavana treated as ‘lesser mortals’ by KJo?

Unfortunately, KJo didn’t treat Maheep and Bhavana with as much respect as he did with Gauri Khan on the show. For starters, there was no mention of their careers. Rather, he brought to their immediate attention on how they became overnight celebrities thanks to his show, The Fabulous Lives of Bollywood Wives. More insulting questions followed which the three friends answered with much honesty, dignity, and grace.

KJo’s questions to Maheep and Bhavana ranged from the hearsay about them being social parasites on Gauri Khan, and whether their husbands’ failed careers affected their relationship with Gauri, whose husband is known as the Badshah of Bollywood.

But as Maheep answered, their friendship goes beyond three decades, and one can’t fake it for that long. It’s true because what makes the Fabulous Lives of Bollywood Wives show a raging success is the friendship of these star wives.

Gauri on the witch hunt of Aryan Khan

When KJo brought up the ‘downs’ in SRK-Gauri’s family and how they’ve come out each time stronger, you’d have expected Gauri to open her heart about the Aryan Khan case. Especially his mental health after the witch hunt.

But she barely touched upon the issue, acknowledging that it was the lowest phase in their family, and quickly moved away from the subject. I would like to think that it really isn’t stuff of gossip, and the family had handled themselves with so much grace in public. But it could also be because there’s so much at stake, with SRK’s proposed big comeback into movies, as well as the careers of Suhana as an actor with her Archies debut, and Aryan planning to become a film writer and possibly a producer and filmmaker in the future. Gauri was at her diplomatic best.

The hot rapid fire round!

The rapid fire gets even better. Of course there was Gauri Khan with her answers about her dating advice to Suhana and Aryan.

But Maheep was the best – Shanaya came on with her vote of confidence to mom Maheep’s chill parenting even if she called her “too cool”. I’ve read comments on how she is a “bad mom” (again, whatever that means), but I find her to be an empowered and empathetic mom. who lets her child be herself while supporting her in an unequal world.

Maheep Kapoor’s rapid fire responses were the best IMHO. Even though the audience voted for Gauri Khan as first and Bhavana Pandey as second, my vote goes to Maheep for making the rapid fire round and the show fun fun fun. Even though she cheered for Gauri, Maheep responded in jest,

She says it like it is, and I LOVE it. Anyway, Maheep went on to slay in the “MyGlamm Slam” round and win a gorgeous artwork.

Maheep is the kaffeine kick in this episode, even though KJo showed clear preference to Gauri!

Imagine what this koffee episode would look like without Maheep? Totally pheeka only.

Also, notice the tinge of disrespect again when Karan asks ‘only’ Bhavana and Maheep who’d they like to date in current Bollywood, and leaves ‘honourable’ Gauri out of the kalank discussion.

And even though Bhavana looked like a vision in that red dress, was that the same outfit Katrina Kaif wore on the same couch with Anushka Sharma? Maheep had originally worn something else to match Bhavana’s saucy ketchup look, but KJo made her change it.

When Ranveer Singh can, why can’t Maheep? Why can’t she be paired with Hrithik Roshan onscreen? And yes, she is gutsy, if you didn’t know that by now.

Watching this koffee episode suddenly reminds me it’s time to catch up on the second season of The Fabulous Lives of Bollywood Wives. And yes, I’m watching it only for Maheep Kapoor, the real-life ‘Poo’ without even trying.