I realize that the need of the hour is to educate and generate awareness about perimenopause and menopause. For some women, depending on their genetics, it can last as long as ten years, followed by menopause.

‘My periods haven’t stopped. It happened last month as well.’

It’s pretty common. Happens with many. One has to learn to live with it.

‘But, wearing pads in this humidity…. The constant rubbing…. And the itching….! It’s so uncomfortable.’

Oh, come on! Don’t give it too much importance. A woman has to bear this all.

‘I don’t know why I am feeling so weak. Terrible fatigue.’

Common with all women. Low haemoglobin with all the bleeding. Have lots of fluids, and eat food containing iron.

Don’t sit idle. Work. Do more chores and take your mind off it.

‘Feeling terribly hot. Are you feeling the same?’

Go and have a bath. It’s the weather. 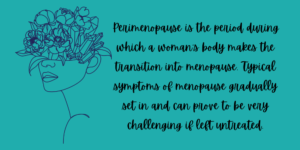 Getting tested can prevent years worth of discomfort

Thankfully, I paid no heed to the advice that I was given. Instead, I got the routine tests done and reported them to my gynaecologist. Through thorough screening and I was diagnosed with perimenopause.

Perimenopause is the period during which a woman’s body makes the transition into menopause. Typical symptoms of menopause gradually set in and can prove to be very challenging if left untreated.

For some women, it begins early. For some, it’s late. While for some it’s not pronounced and for others it’s a horrible phase. Tough luck, I say!

I am aware of perimenopause as I have been a witness to my mother’s ordeal. Hers was a difficult phase, rendering her immobile for days.

My father, who was well aware of such feminine issues, did not waste time and immediately took her to the resident gynaecologist. That eased her life and she made a smooth transition to menopause. But not everyone is lucky like her or me. 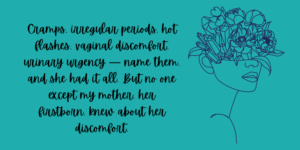 Perimenopause begins as early as 40s

My grandmother went into perimenopause as early as 45. Living in a joint family where she had senior citizens to supervise, younger children to keep an eye upon and a battery of people who flitted in and out of the house, she couldn’t afford to prioritize her health during those awful days.

Cramps, irregular periods, hot flashes, vaginal discomfort, urinary urgency — name them, and she had it all. But no one except my mother, her firstborn, knew about her discomfort.

It was unheard of in those days to rest during periods. A woman is born to endure pain. The endurance test is what every woman has to go through to prove her mettle.

Suffering in silence was once a norm, but not any more

A robust and bold woman of those times, my grandmother quietly suffered through those days. Those were also the days when women had no access to the proper sanitary napkins that we use nowadays.

Strips of cloth, with wads of cotton sandwiched in, were what they used. Washing, disinfecting and drying them were an added chore besides the risk of acquiring an infection. The coarse fabric constantly chafing their thighs made it impossible to walk.

I shudder to think what women of those times have gone through.

Not much has changed today. Periods are still a taboo topic. Feminine issues are brushed aside. Very few men are aware of what their women go through as they advance towards their fifties.

It’s been a few months since I entered this phase. As I started opening up about my issues, to my shock, I found that most women of my age are already perimenopausal. 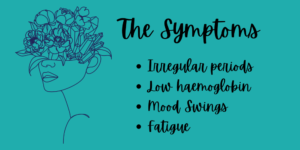 But have no inkling of the medical condition. That makes me wonder why is the awareness so low?

One can feel tired and exhausted due to many factors. Who links it to something as regular and common as Periods?

Women dare not talk about fatigue. It’s almost a criminal offence if they complain of weakness.

Low Haemoglobin is another factor that adds to fatigue. But, once again, it’s natural to bleed, lose blood and remain anaemic. How many of us ever think of getting blood work done to rule out the low count of haemoglobin?

That’s a typical symptom.  Believe me, I have been battling it for the last few months. There were days I woke up feeling bright and chirpy and then there were days, I was abnormally low.

Add to that the loss of my father. As a rational person, I spent hours trying to decipher my state of mind. Every logic failed. Yes, I did miss my father. It was difficult to accept his demise, but why would that make me feel utterly dejected?

For there are so many things around me that make me happy. As always, I went to the GP, I trust. An anti-depressant was prescribed, which did help me cope with it. The visit to the gynaecologist further threw light.

This is all a part of the grand scheme of perimenopause. The fluctuation in the levels of hormones is the culprit.  After a month of hormonal therapy, I could see the changes in myself. I started feeling better.

Today, I am inching back to my earlier self, the self I thought had been banished forever. A major issue in this stage of transition is, denial.

Denial from people around you

Oh, yes! The moment I told my well-wishers that the symptoms were nothing but perimenopause, I was greeted with a variety of reactions.

“Oh no, that means your libido will diminish. What about your husband?” (Seems it’s the husband who suffers most during perimenopause and not the woman).

Another quipped, “Thank God, you have two kids. Now you can stop menstruating.” (Hah! Everything boils down to this).

I found that most of these women in the age bracket of 45-55 have all been suffering silently from these symptoms, but refuse to accept that they are on their way toward menopause.

Menopause, unfortunately, is linked to ageing. The loss of fertility, loss of libido and loss of control that they seemingly have over their husbands often comes as a rude shock to them.

Sometimes perimenopause can last a decade

I realize that the need of the hour is to educate and generate awareness about perimenopause and menopause. Perimenopause for some women, depending on their genetics, can last as long as ten years, followed by menopause.

This can have devastating consequences on a woman’s mental health. If left untreated, the perils are many.  Unnecessary stress and anxiety can lead to severe depression, and we know of too many tragic cases.

The more we discuss, the better for everyone

For writers like us, it’s imperative to keep writing. No, not just theories. But share your own experiences. Break the taboos. Create awareness. Force women to come out of their shells and speak out.

Meanwhile, we can all form support groups and reach out to our counterparts. This will surely help us to bond better. 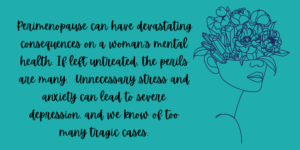 Three 3-As of perimenopause

Awareness, acceptance and action —  is the three-pronged approach that we need today. With the rising stress levels, our body needs more attention.

And along with it, our mental health is equally important. Come join the brigade and spread sunshine. A little sunshine is all we women need to pull us through such a crisis.

Check with your gynaecologist first for a diagnosis. 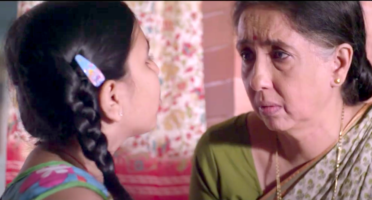