The 1947 Partition and the formation of the nations India and Pakistan are woven into the plot seamlessly, used as the backdrop for the development of the story in Ms. Marvel.

Superheroes have never fascinated me, yet I was all hyped up, waiting for Ms. Marvel to premiere on Disney Plus. And why would I not be excited?

Based on the famous comic character co-created by Sana Amanat, Marvel Studios has broken new ground by featuring a South Asian protagonist in its prestigious new television production.

A sneak peek at Ms. Marvel

Kamala Khan, a Pakistani-American teenager, lives with her parents and brother in Jersey City. She is enveloped by all of the warmth and affection one could have. An avid gamer and a superhero fan, Kamala goes to a convention called “AvengerCon” with her best friend Bruno, wearing a bangle belonging to her great-grandmother Aisha. At the convention, a big surprise greets her when she discovers that she has superpowers.

In the process of saving one of her classmates and a boy from her local mosque, Kamala earns the title “Night Light” on the web, thus attracting the attention of unsavory government agents who are determined to apprehend her. To add fuel to the fire, she ends up meeting a group of beings from another dimension, known as the Clandestines or “djinn”. They have ominous plans of their own for her family heirloom.

At the request of her grandmother, Kamala even makes the trip to her homeland Pakistan. There, she discovers ancestral secrets which could dramatically change her life as she knows it. Watch Ms. Marvel to join Kamala on her adventurous journey.

The narrative has its foundation in a heart-wrenching historical event

The 1947 Partition and the formation of the nations India and Pakistan are woven into the plot seamlessly. These events are used as the backdrop for the development of the story.

Flashes of the Partition are presented with artistic perfection. You can feel the poignant strain as scenes depict millions desperately seeking to find a home for themselves across the border.

Look out for stellar performances! 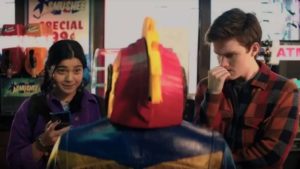 A scene from Ms. Marvel – Kamala Khan and Bruno

The show undoubtedly belongs to Iman Vellani who takes the weight comfortably on her shoulders. It is her debut performance, and she does a phenomenal job as Kamala, keeping you involved in her world.

The supporting cast provides able assistance even though some of them have limited screen time. Zenobia Shroff and Mohan Kapur are convincing as Kamala’s overprotective parents Muneeba and Yusuf. Matt Lintz as her buddy Bruno is cuteness overloaded, and Nimra Bucha, as the Clandestine leader Najma, superbly pulls off a role that is evil incarnate.

Pakistani drama regulars Samina Ahmad and Mehwish Hayat do justice to their roles as Kamala’s grandmother and great-grandmother, respectively.

Without giving away the spoilers for those who haven’t watched Ms. Marvel yet, I would just like to drop a hint that Indian and Pakistani heartthrobs Farhan Akhtar and Fawad Khan are in crucial roles. And can they ever disappoint?

The impressive presentation of the South Asian diaspora brings a smile!

Every episode has given desis a reason to be excited about because one feels completely at home. Kamala’s mom and dad worry excessively about her safety and insist that she come home on time from a party. South-Asian parents will at once identify themselves in that position because most of them have such rules for their children.

The visual treats of biryani, paani-puri, and the scrumptious food laid out at Kamala’s brother Aamir’s (portrayed by Saagar Shaikh) wedding at once appeal to the tastebuds and remind one of the grand celebrations in our culture. There are iconic Bollywood numbers and Pakistani Coke Studio songs playing in the background, and references to Shah Rukh Khan, DDLJ and Baazigar feature in conversations. If one didn’t know that this is a Marvel production and happened to watch it without seeing the credits, it could easily be mistaken to be a series produced in Pakistan or India.

What could have gone better in Ms. Marvel

The show is not without its shortcomings, however. The villains have performed well, but their characters could have been sketched out better. They are not painted with as many nuanced shades as one would typically expect from the Marvel Cinematic Universe; hence the energy is somewhat missing.

The script could have been tighter too. At times I did get the feeling that the pace was slow. Way too much time was devoted to Kamala trying to find ancestral secrets as opposed to her saving  mankind as superheroes usually do!

The show ultimately will still win your heart!

With minor hiccups, Ms. Marvel nevertheless manages to charm. If acceptance and representation need to be the order of the day, Ms. Marvel has done a truly outstanding job by bringing to its audience the first Muslim South Asian character.

It’s all magic, fantasy, and adventure, yet you end up learning a few heartwarming lessons along the way. That kindness completes the circle of love and that hatred leaves it broken is the wonderful message that emerges.

Friendship bridges all differences in culture, religion, and language. We see that beauty in the bond between Kamala and Bruno.

A conversation that caught my attention was one between Kamala and the imam of her mosque. He teaches her the gospel of truth and compassion when he says, “Good is not a thing you are… It is a thing you do.”

The humor too flows naturally in the series. To cite an example: it sure does tickle your funny bone when Kamala’s mother comes up with a baggy green salwar kameez to mimic a Hulk costume!

In 6 episodes, each one lasting a little less than an hour, the show grips your interest and keeps you mesmerized. Have an enthralling experience as you drown yourself in the charisma and marvel at the adventures of Kamala as Ms. Marvel! 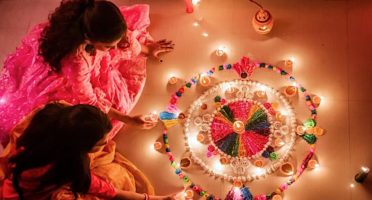