When you market your show as ‘controversial’, at least live up to those promises. We want to see realness—the cracks, the flaws, and the gamut of human emotions if you’d just stop directing the guests and their responses.

While I knew it was going to be another cringe episode of Koffee with Karan Season 7, I was still shocked.

Okay, so Janhvi Kapoor came looking like Jessica Rabbit and she fully nailed the looks part. However, I feel sorry for her. KJO and Manish Malhotra seem hell-bent on making her look and sound like a Kardashian while Papa Boney is busy groping younger actresses’ butts. This wouldn’t have been the case had Sridevi been alive.

Poor girl has no idea what she’s saying, doing, wearing, or even earning (the scariest bit). They must have promised the naive girl more plum parts (confirmed by KJo as consolatory words when she lost both the rounds to Sara) plus the bumper offer of a sexy Kardashian style makeover. The reality is while Janhvi can dress like the Kardashians, the latter group starting from the mother Kris, are all super intelligent and financially savvy women who run empires. There’s a moment in the show where Sara sarcastically quips that Janhvi still does not know about money matters and KJo and she exchange subtle knowing glances.

As for Sara Ali Khan, it was a watered down appearance as compared to her firecracker debut on the show a few seasons ago. She looked dapper in a sailor girl outfit and I preferred her look over Janhvi’s overtly sexy gown. Not that I have anything against ‘in-your-face’ sexy outfits, as you need supreme confidence to pull those. Think Malaika Arora Khan or Lizzo!

However, something seemed ‘off’ about Janhavi’s Kardashian makeover, which she attributed to her deeply philosophical “F&*%-it” moment during the pandemic. 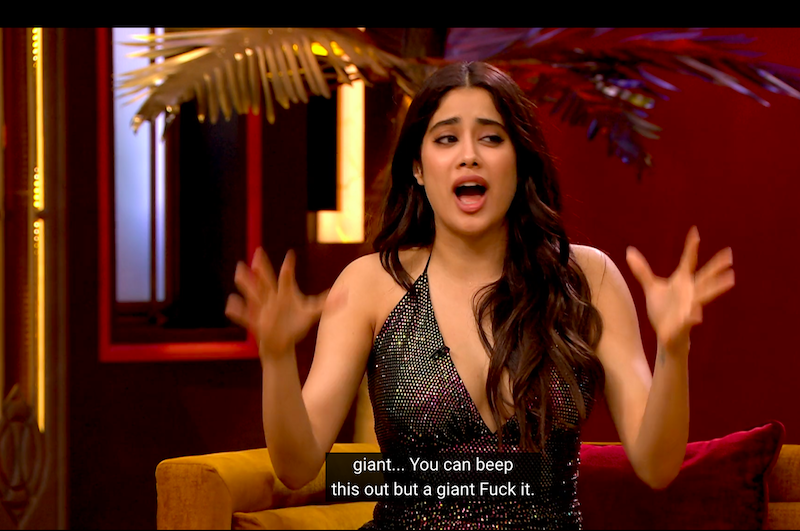 Sara is definitely witty and intelligent, which made this episode mildly watchable. But she wasn’t all out there because she had to dim her light too, like Ranveer Singh in the first episode. While Janhavi seemed super comfortable on the show, like she was sitting on her own couch at home, Sara seemed restrained and you could see her holding her tongue back several times. 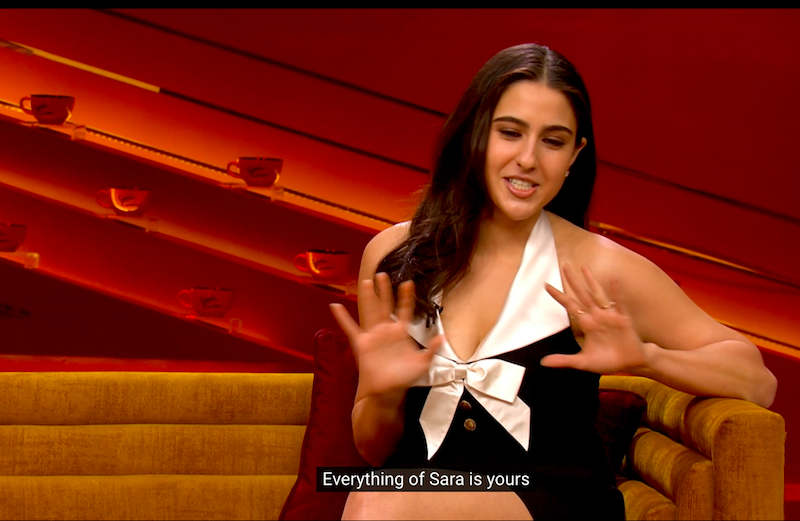 Why do these young women need validation from a much older man?

KJo, comparing her family dynamics to Janhavi’s, didn’t help her feel fully at ease either. He seemed like one of those insensitive and gossipy bosses who’s unnecessarily intrusive about your personal life. I had one creepy boss like that. Wonder why he never asks Alia Bhatt about her family dynamics, and picks on the children whose father abandoned their mother for a younger woman and left her to look after the children alone.

This constant pitting of both the actresses, Janhvi and Sara by KJo starting from their family backgrounds to digging the dirt on their dating history with the Paharia brothers to their “sexiness”, continues throughout the show and was in poor taste.

Why do these young women need the validation of a 50+ year old man on their lives—looks, career and love—in the first place? Isn’t it exploitative to cash in on the lack of worldly wisdom of young women that often comes only with experience and age, for your profit? 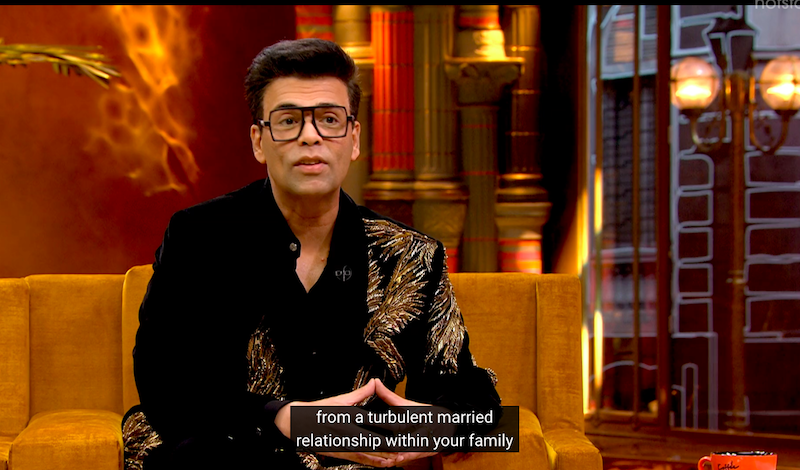 But there was redemption In Sara’s comebacks

But there was hope in the form of Sara Ali Khan and her comebacks. My favourite parts were when Janhvi gloats about Alia being the best actor in the country or Ranbir-Alia being the best couple, and Sara’s expression says it all about her disapproval. When it was her time for the rapid fire, she clearly states all are stars or the ‘best’ — Deepika, Katrina, and others (Atta girl!). 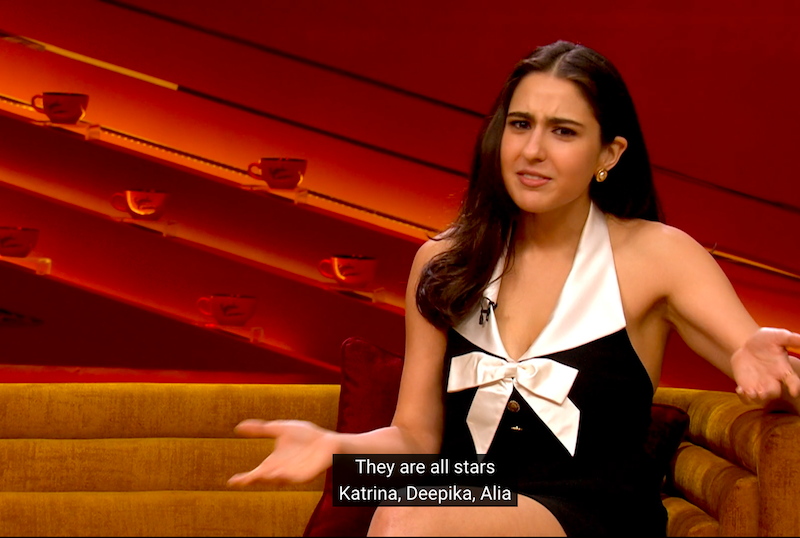 The best part was when KJo kept branding Sara as a cheapskate, she gave the perfect comeback reply by naming Ranbir-Alia’s wedding as her favourite, as it was the cheapest. (Attagirl again!) While Sara was a treat to watch on the show because of her wit and eloquence, she wasn’t entirely honest and uninhibited. Pity!

You’d have thought the pandemic and especially the controversy over Sushant Singh Rajput’s death would soften hearts and we’d see no more low-key bullying in the show. But it looks like Kartik Aaryan is the new ‘bali-ka-bakra’ of the show. As if Ranbir Kapoor is some kind of intellectual stud. Ranbir Kapoor is another Kartik Aaryan with the Kapoor privilege. In fact, Kartik Aaryan is way sharper, and a bankable actor at the box-office. At least, Aryan is a self-man guy despite his limitations. No laughing matter!

What the audience wants

I want my one hour back. While Karan Johar is a suitable host, even he seems to be brain dead. He used to ask such funny and clever questions in the earlier seasons. Whatever happened!

KJo, please come out of your comfort zone, and look outside your coterie for guests list. Have the courage to face spontaneity from the guests. Why play safe in a supposedly ‘steamy’ show? 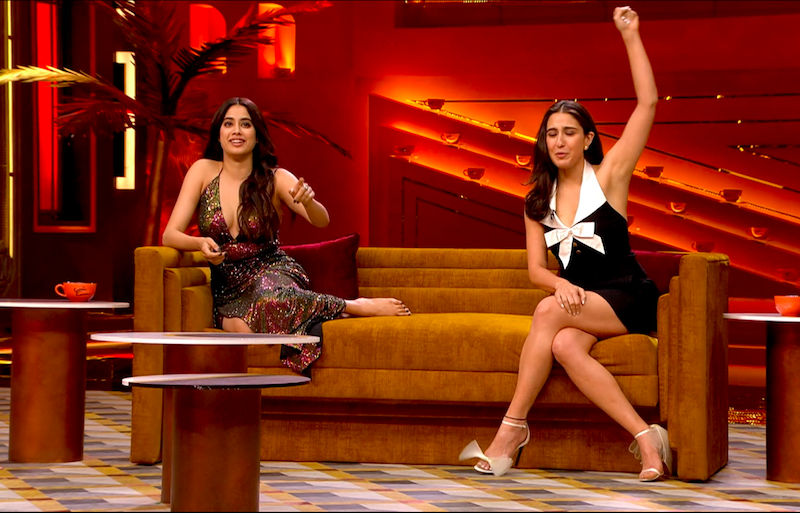 When you market your show as ‘controversial’, at least live up to those promises. Bring in pairs on the couch such as Kangana-Taapsee, Kangana-Swara, Kangana-Diljit, Kangana-Hrithik, Kangana-Alia, Alia-Kriti, Ranbir-Katrina, Ranbir-Deepika, Kartik-Sara, Lucky Ali-Badshah etc. Stop playing goody-goody and hyping up the friendship of the guests, be it Alia-Ranveer or Sara-Janhvi. We don’t want to see just ‘niceness’. We want to see realness—the cracks, the flaws, and the gamut of human emotions if you’d just stop directing the guests and their responses.

KJo, if you want to show love, sisterhood and friendship, call guests like Riteish Deshmukh and Genelia D’souza, or Karisma-Malaika-Kareena-Amrita or Neena Gupta-Soni Razdan and the likes. Please call unexpected guests like Deepti Naval, Nafisa Ali or Mahima Chaudhry to share their stories. Basically, kindly look outside your paid ‘Dharma’ coterie.

What Karan Johar can learn from Kangana Ranaut

What this show needs is truly controversial guests who are allowed to be themselves and spontaneous.

Kangana’s LockUpp show was a riot because of the casting. Ekta Kapoor brought Munawar Faruqui and Kangana Ranaut together, and the casting of the other contestants was on-point too. A case in point is Azma Fallah, who shined by being her uninhibited self. KJo can also take a few pointers from Kangana on how to be a sensitive and inclusive host. Kangana surprised me with her fair attitude, which was a stark contrast to her abrasive and divisive tweets. She was professional as her host, and didn’t let her personal beliefs cloud her judgement. Where ever she erred, she also rectified and made amends. A case in point is Saisha Shinde whom she evicted, and also brought back onto the show.

There were moments when Kangana stepped into the shoes of playing mentor where the contestants had to reveal some of their darkest secrets and she truly empathised with them. Despite the low-budget, that LockUpp Season 1 was so much more entertaining than Koffee with Karan Season 7. It came as no surprise that Lockupp was a blockbuster hit that was loved by its audience.

But KJo will not go that route because the “Koffee with Karan” show is now reduced to being a publicity platform for Alia Bhatt and Ranbir Kapoor and projecting them as the most intelligent and exceptional human beings, best actors, and couple. Even his rapid fire round has become predictable with the constant ‘Rank the best actor/ actress/ wedding/ couple’ questions. And we know the answer to those already. 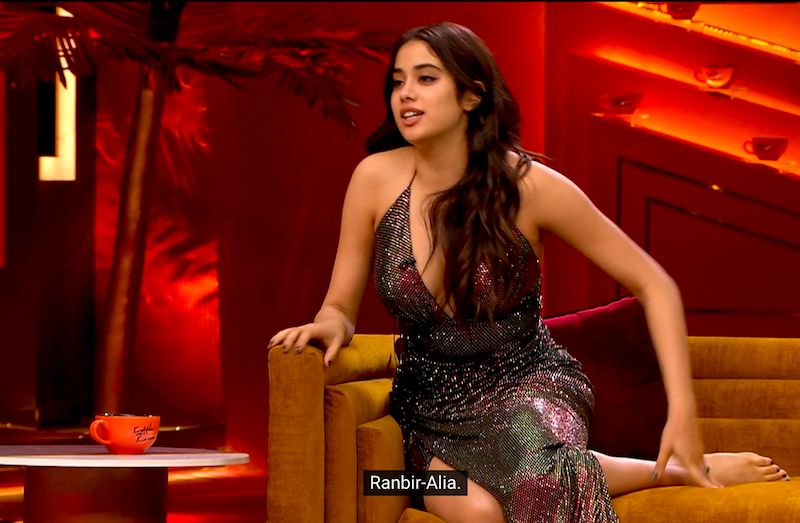 The ideal audience for the current season of KWK is Mahesh uncle, Soni Aunty and Neetu Aunty or ‘tharkis’ who like seeing twenty-something actresses in Jessica Rabbit outfits. The rest of us are simply wasting our time on this biased, brain-dead and lacklustre show.

I can’t take ‘Koffee with Karan’ Season 7 anymore because it has no steam or kick, and is bilkul thanda, except for a few guests. And am seriously planning to start a petition for a brand new show series, ‘Rum with Rakhi’ or ‘Kognac with Kangana’.