But whatever came out of Akshay Kumar's mouth was problematic. Especially when he dismissed the pairings of older actors with younger actresses as "plain jealousy."

Looks like Karan Johar has been paying close attention to the backlash his current season is facing. He seems to have done some quick damage control by having Akshay Kumar and Samantha Ruth Prabhu’s interview as episode 3 of Koffee with Karan Season 7. Smart move!

The biggest criticism that his talk show is facing in the current season is that it’s boring and humourless. One may credit it to an overall lack of intelligence and wit. While Bollywood is not the place you can look for these traits, we had some well-rounded actors in Shah Rukh Khan, Kajol, Sushmita Sen, Preity Zinta earlier on the show.

In one word: Samantha Ruth Prabhu.

Apart from Samantha’s naturally optimistic and bubbly persona that’s infectious, it’s her intelligence that made it watchable. 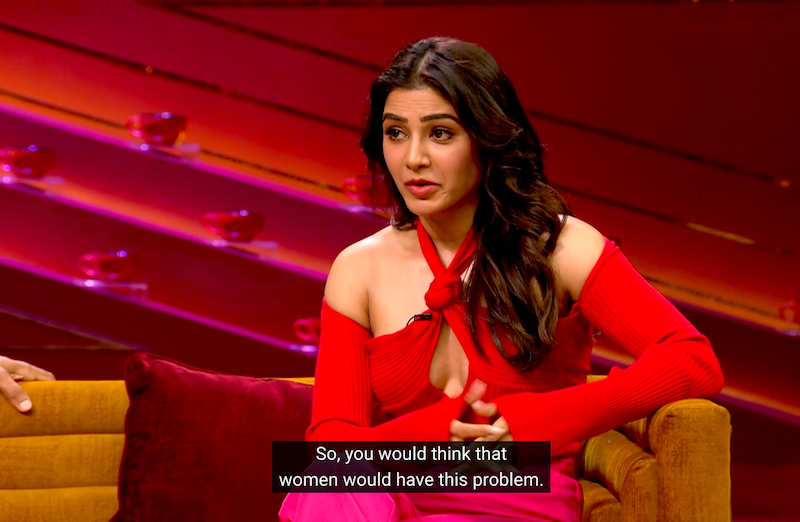 This was evident when she talked about the criticism that her song ‘Oo Antava Mawa’ catered to the male gaze. Even when it was a satire on it. She defended her choice, saying who better than nautch girls and actresses, accustomed to a wide range of male gaze, make the satire. 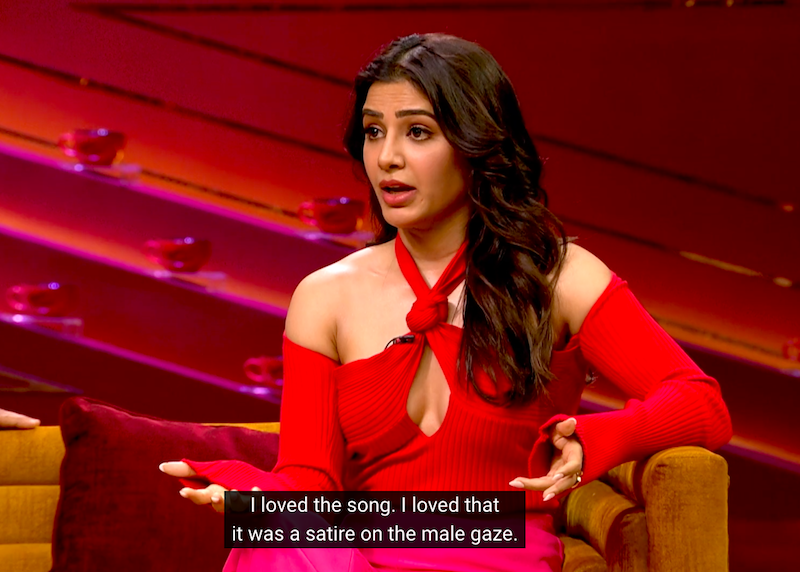 Little surprise that Samantha was an academic topper. She discontinued her education because her father couldn’t afford it anymore and joined the movie industry instead. 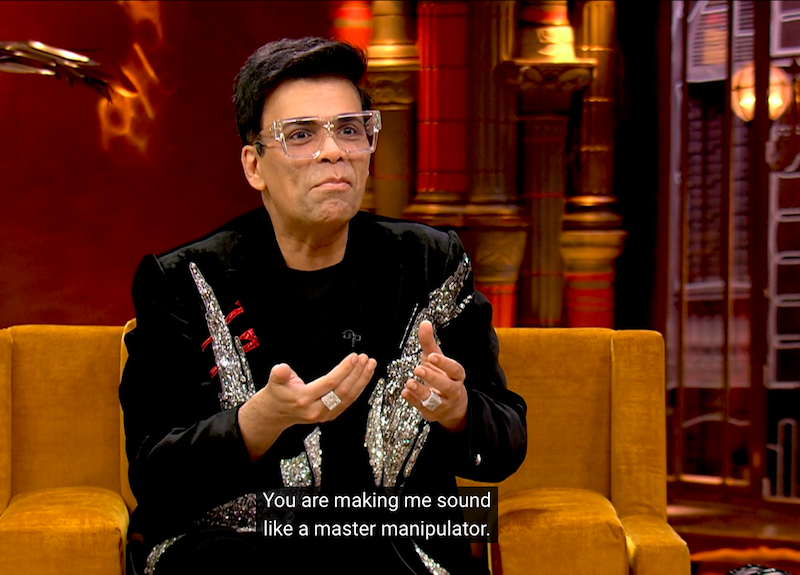 Karan Johar was also in his element as a host. His self-deprecating humour was intact, which I find his most endearing quality. He’s a shrewd producer who knows what sells with his audience and serves them exactly that.

One good outcome of this discussion was breaking the myth that women are each other’s biggest enemies. What I love the most about Samantha Prabhu is her equation with contemporaries such as Nayanthara, and Tamanna Bhatia. 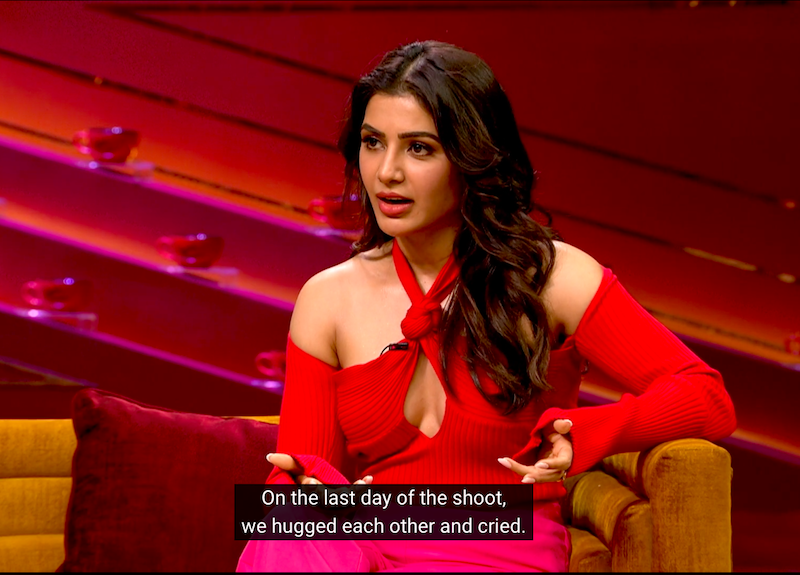 The love and respect for them was evident on this show, and heartening to hear despite Karan’s occasional snakiness.

Akshay Kumar didn’t bring much to the table in the show.

It was amusing that he discussed the insecurities of Bollywood actors. There are past reports where he’s said to have cut his male co-actors’ scenes. Seems like he’s a changed man now. *sarcasm alert*

But whatever came out of Akshay Kumar’s mouth was problematic. Especially when he dismissed the pairings of older actors with younger actresses as “plain jealousy.” He asks a delusional question to Karan, if he looks like a 55-year-old man. Yes, you do! 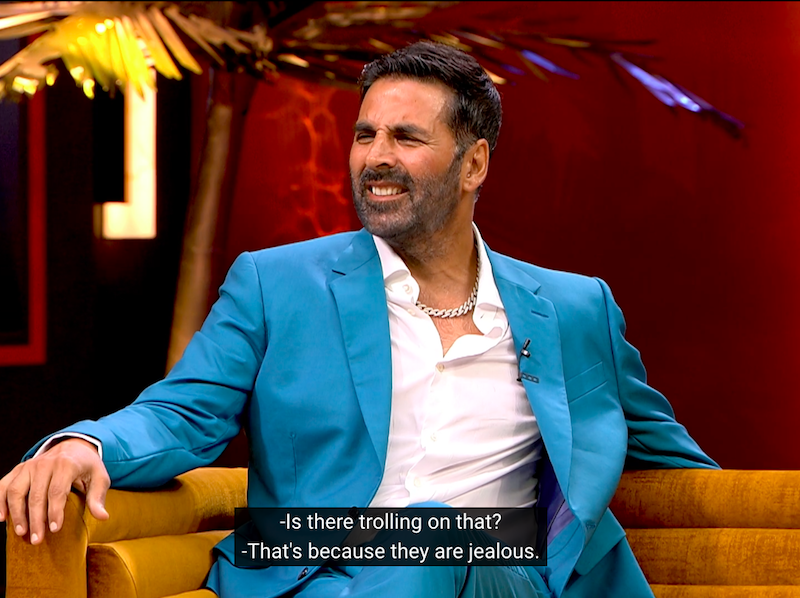 To see Samantha Prabhu pander to his ego was a tad disappointing. But it’s what patriarchal systems do to most women in it. Fortunately, she also pointed out, albeit masking it as a quip, that his “one day’s salary is worth the salary of an entire movie project for actresses”, bringing out the pay gap  in the film industry.

Not surprisingly, Akshay Kumar dismissed the criticism about his Canadian citizenship. He continues to make preachy Indian “patriotic” movies and social media videos. 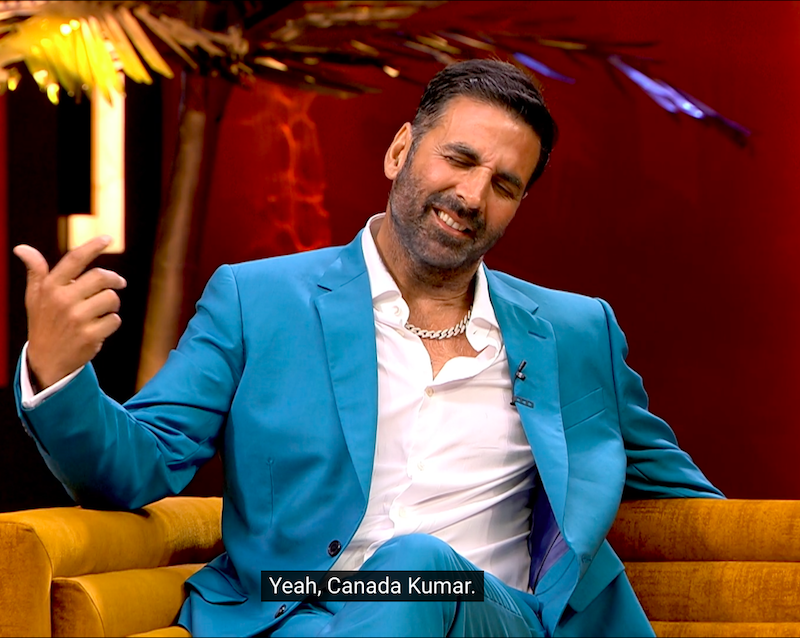 Another problematic statement was his notion of what makes a successful actor which is luck or destiny. This is in line with what Sonam Kapoor had said about good karma. This is an irresponsible statement to make in a highly superstitious country like ours. Women routinely endure abuse, domestic violence, rapes, divorce, caste related atrocities or any ill fortune as part of their “bad karma”. It implies that all victims “deserved” it, because of their actions in the past lives. As educated people, we can be more empathetic and rational in our responses. Our privileged responses devoid of sensitivity can lead to further conditioning, bias, and stigma in society.

Then there was a discussion on nepotism. KJo cleverly brought in outsiders to prove his point. Akshay Kumar kept mum. Obviously, he’s married into a film family with a legacy. His son of course, is waiting in the wings to join the film industry.

Samantha weighed in that everyone has their own demons and that when star kids fail, the entire country knows about it. But what Samantha missed mentioning are the endless opportunities star kids get despite a spate of flops, a luxury denied to outsiders. Also, they didn’t discuss that while Kangana Ranaut introduced and popularised the word, it was Sushant Singh Rajput’s death that invited the public ire for the first time. Bollywood is still reeling under the negative public impression with barely there hits in a year that featured star kids.

Also, can Akshay Kumar keep down the creepy behaviour?

If there is another word apart from ‘nepotism’ that Koffee with Karan is associated with, it is the word ‘cringe’.

In this episode, the cringe factor was amply provided by Akshay Kumar in all his creepiness. The old man couldn’t keep his hands off Samantha Ruth Prabhu given the least chance.

While I’m sure the show is scripted, it was still cringe to watch the entrance with Samantha in Akshay’s arms. And during the dance round, when he swings her around to the point where the mic falls off her, with KJo begging him to stop his Tarzan act. 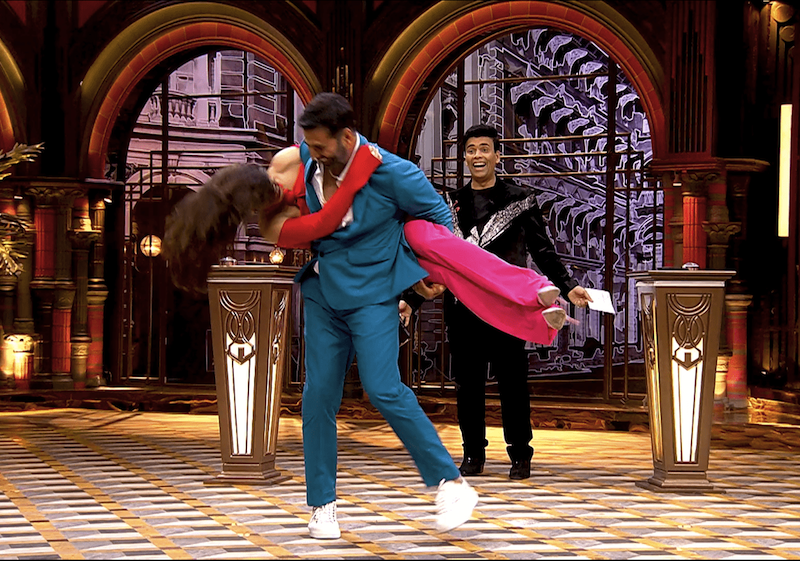 While Samantha Prabhu might have given her consent, it’s still discomfiting to watch lusty old actors tickle the bellies of younger actresses and swing them around like toys on national television to establish their hyper-masculinity. Sadly, this is the industry norm and the rite of passage for actresses worldwide.

Enough with the Alia obsession already!

Last, what didn’t work again was Karan Johar’s incorrigible obsession with Alia Bhatt. Someone please tell him to stop. There is no denying Alia’s acting abilities. But there’s also no denying the gatekeeping that happens in the industry to reserve some of the best roles for her.

We are also yet to see if Alia Bhatt can pull in the crowds without a big filmmaker, production house, and superstars as her costars. Like say Kangana Ranaut in ‘Queen’, Sridevi in ‘English Vinglish’, Parvathy Thiruvothu in ‘Uyare’, Rima Kallingal in ‘22 Female Kottayam’, Nimisha Sajayan in ‘The Great Indian Kitchen’, Bhagyashree Milind in ‘Anandi Gopal’, and several other regional actresses in India.

So, it was good to see Samantha Prabhu respond to Karan Johar back in the same coin saying she admits paying Ormax media to come on top of their poll.

The way Samantha manoeuvred comfortably through the show speaks volumes about her impeccable networking skills. She made everyone around feel comfortable and kept the camaraderie alive.

While there are people whose approach is combative like Kangana Ranaut, there are others like Samantha Ruth Prabhu and Priyanka Chopra Jonas who don’t take on the system head-on, but work around it and still stand up for themselves like a bawse.

All-in-all, this episode was an enjoyable watch. Psst! If not for the cringe factor in the form of Akshay Kumar.

But compared to the other bizarre trending news of Ranveer Singh and Britney Spears breaking the internet with their nudes, or even the incident when Akshay Kumar convinced his wife, Twinkle Khanna to unzip his pants at a fashion show a few years ago, I’ll take the Koffee version of “Ooo Antava Mawa” featuring Akshay Kumar and Samantha Ruth Prabhu any day.