My Happy Family is a feminist masterpiece that ponders back and forth between relationships, family and patriarchal hourseholds.

A quote from Ayn Rand offers a thought-provoking perspective:

“Learn to value yourself, which means: fight for your happiness.”

So is there a truth embedded in the belief that happiness is what we can create for ourselves?

Based on a similar line of thought, Nana Ekvtimishvili builds the story of Georgian drama My Happy Family (2017) which she co-directs with Simon Gross.

My Happy Family mirrors a Georgian household where three generations live under the same roof. The protagonist is Manana, a school teacher in her fifties who lives with her aged parents, husband Soso, son Lasha, married daughter Nino, and son-in-law Vakho.

In an unanticipated move, Manana shocks her family by announcing that she wants to move out and stay separately all by herself.

In a patriarchal setup, a married woman leaving her family to live on her own is viewed as disrespecting all traditional norms. Such an act is perceived as disgraceful. “What will people say?” is the question that inevitably arises in such a scenario.

Manana’s case is no exception. A stream of unsolicited advice comes pouring in, including her nagging mother trying to enforce her point of view and her overprotective brother offering his two cents.

No explanations presented and questions answered, Manana does not budge an inch from her decision and leaves home.

What awaits Manana as she opens a new chapter in her life? Finally, does she rejoice over her decision or regret leaving her family? 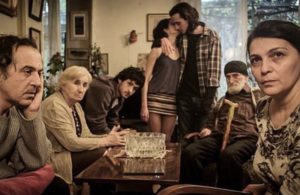 The film paces through a sense of realism

The film paces through Manana’s story before and after she moves out, and we see her life through a lens of realism.

It is a natural flow of events, and her life does not change dramatically after leaving her family. Manana does not do anything phenomenal to be happy.

She indulges in mundane chores like going to the market and cooking and seeks solace in simple things. She enjoys Mozart’s music that replaces the bickering she had gotten used to.

In the flashbacks, she lived in a flat with a limited area where she had to keep clothes in a bedroom occupied by her daughter and son-in-law. Now she has that open space all to herself.

We do not see Manana disassociating herself from her family after she leaves them. There are instances when happenings in her children’s life still bother her.

It is not an easy breeze to enjoy her new sense of freedom. Her peace of mind is deeply disturbed when she discovers a shocking truth about Soso at her high school reunion.

These subplots contribute to the realistic angle that tightens the narrative and makes the story convincing. Also, what places the film on a strong foundation are the impressive performances of Ia Shugliashvili (playing Manana) and the rest of the star cast, who do justice to their parts.

My Happy Family can easily qualify to be in the genre of feminist films. It is the story of a woman charting out a course of action that she feels will make her life move at ease.

She asserts her independence and seeks freedom by sojourning on a path to look for peace.

You can find women wanting out of a patriarchal society- keep their frustrations buried. Manana is the outlier to muster the courage to take such a big step.

My Happy Family is a contemporary unconventional story

The unconventional story is what makes it unique. Manana battles with her emotions to decide what is best for her.

Unfortunately, there is an absence of morals as to whether her decisions are right or she has erred.

The film concludes without ending the journey in a cul-de-sac but leaving the road open. There are issues to ponder, as they leave a lot to the imagination.

The central question is:

What does one look for in a marriage? Is happiness all about being flocked by your kith and kin?

Refreshingly different, My Happy Family portrays nuances of the issues within a family that may be shoved under the carpet, yet one cannot ignore them.

I recommend watching it to appreciate the cinematic brilliance of a beautifully made Georgian film.

Image credits: A still from the trailer of film, YouTube